OK — we’re past the point of wanting to hear more about Snohomish County’s COVID outbreak. We are overwhelmed with information, bombarded with opinion from all sides, drowned in data and counter-data. We are suffering COVID fatigue. We are suffering information overload. Our circuits are melting.

“People are tired of it,” County Executive Dave Somers told reporters during the weekly COVID media briefing. “I know people are tired; as this has evolved, early on it was masks, social distancing and shutting down business; I personally don’t want to see business shut down again.”

County Administrative Health Officer Shawn Frederick echoed that: ”None of us want to see more mandates going into effect.” But both officials are frustrated with the slower pace of vaccination. While 10,000 more residents got the shots last week, 209,000 in the county have not yet had a first dose. “We know that there are people who specifically were waiting for FDA approval,” said Frederick, referring to U.S. Food and Drug Administration’s full approval Monday of the Pfizer-BioNTech COVID-19 vaccine. “We’re hoping now that they will move forward as soon as possible.” But Somers admitted that there are some who will not get the shots “no matter what.”

The new numbers released in the county’s COVID briefing remind us that residents are still very much at risk. The rate of new cases in the last two weeks was the second highest – ever. An average of 442 new cases for every 100,000 residents. Frederick says we are on track to surpass the highest infection rates that we have ever seen and warns that it may come within the next few weeks.

– In July, there were 2,600 new COVID cases in the county – twice as many as in June. Of those, 537 were so-called ‘breakthrough cases’ – the more transmissible delta variant infecting those who have been fully vaccinated. In June, that number was 138. Frederick told reporters that,“the delta variant is the only virus in town,” accounting for 95% of all new cases

– Last month, twice as many people (140) were hospitalized as in June. Of those, 80% were unvaccinated.

There were 14 deaths in the county in July – down from 27 in February. That, said Frederick, is because the overwhelming majority of the most vulnerable — those over 65 — are now vaccinated . Frederick adds that the vaccines “are working, saving lives and reducing the strain on hospitalization.” Even at a 75% effectiveness rating now, he insists they are still “very good” at protecting people.

What about the Fair? 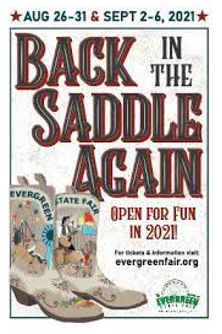 The Evergreen State Fair, which opens Thursday in Monroe, is not going to be the same fair as in past years. Vendors will all be in one open-sided building to keep air circulating. They have set up 300 hand sanitizer stations and are offering N-95 masks to anyone who needs one. People going indoors are asked to mask up and the county is limiting daily attendance. “We believe we can do it safely,” Somers said.

Both Snohomish County leaders agree that we may need “periodic booster shots over time” for COVID, but not yet, citing plans from the Centers for Disease Control, below:

A final note from Frederick, who said the county is constantly re-evaluating the data and making recommendations for change as needed. “If we need mandates,” he added, “they should come from the state level; the virus does not respect county boundaries.”

3 Replies to “County COVID briefing: With cases increasing, delta is ‘the only virus in town’”