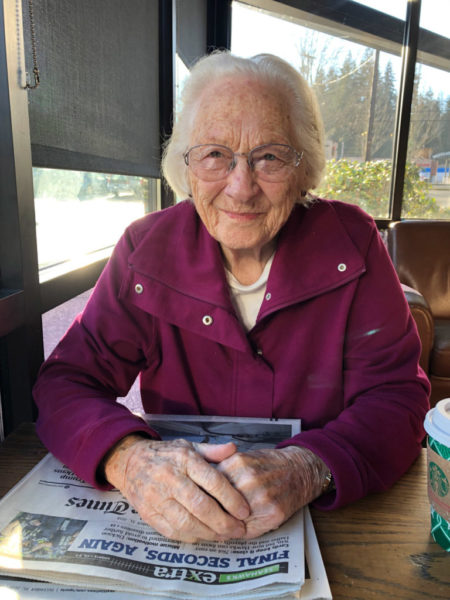 Dorothy Lee Williamson (nee Crow) passed away peacefully on August 9, 2021 in Richmond Beach, WA at the age of 103. Dorothy, known all her life as “Dodo”, was born in Toppenish, WA on November 16, 1917 to James William “Bill” Crow and Vinnie Winnifred Coleman Crow a pioneer family from the Bickleton and Mabton, WA areas. In 1924, the Crow family moved from Toppenish to Seattle, and then to Edmonds in 1928 and opened Crow Hardware, a fixture in Edmonds for many years.

Dorothy lived on Main Street in Edmonds for most of her life. Growing up, Dorothy and her brother David spent their childhoods working at the family hardware store, swimming at the Edmonds beach and diving off the pier for pennies tossed by ferry travelers. After graduating from Edmonds High School in 1936, Dorothy went on to receive a teaching degree from Central Washington College, and shortly thereafter married her high school sweetheart, Melvin Yost around 1941. Sadly, Dorothy was widowed when Melvin lost his life to friendly fire during an Air Force training exercise out of Honolulu, Hawaii, during WWII.

Dorothy found love again, and was married to Harold R. Williamson of Ballard, WA in 1946 and became mother to 5 year old Gary Williamson. In 1947, Harold and Dorothy welcomed their second son, James R. Williamson. In her early career, Dorothy taught school, and worked with her family at Crow Hardware. She later went on to become a school secretary at Snoline and Beverly elementary schools in the Edmonds School District. A job she loved and the children and the staff loved her.

Dorothy was a proud resident of Edmonds for more than 95 years. She was on a bowling team with her dear friends “Dot”, “Deen”, “Annie” and “Lulu” for many years and was a longtime member of the Edmonds Cemetery Board. Dorothy was also a regular at the Edmonds McDonald’s for Monday coffee klatches for over 30 years. Recently, she loved her “coffee time” at the QFC Starbucks in Edmonds, greeting friends, reading the paper and enjoying a hot cup of coffee. She was known for her “Dodo rolls” cookies, cakes and hosting family dinners. Dorothy was blessed with many close friends, past and present, who she cherished.

Donations in honor of Dorothy can be made to: Foundation for Edmonds School District; Edmonds Historical Museum; or the charity of your choice.