Edmonds may finally be one step closer to a new police chief. City councilmembers have now interviewed the three finalists, just hours after Mayor Mike Nelson conducted his own one-on-one meetings with them.

Two national searches have taken 19 months; cost nearly $120,000 dollars; sparked a series of combative city council sessions; led to the nomination last year of Chief Sherman Pruitt of the Sauk-Suiattle Police to be Edmonds top cop; but the mayor quickly rescinded the nomination (stating it was because Pruitt didn’t disclosed disclose a job application with Lake Stevens police). That led to a relaunch of the search that netted these finalists.

Via Zoom, councilmembers spent about 45 minutes separately with each candidate. Members were allotted just one question each, with no follow-ups, to make sure the candidates each answered the same questions. Candidates got three minutes to respond and another three minutes to sum up at the end of their interview. We are not publishing every question and answer. You can click on this link to watch all three Zoom interviews in their entirety.

The questions ranged from the impact of police reform nationwide and how each candidate would balance that with a community’s need for law and order, to how each would integrate new state laws restricting some current police tactics, to how they would support officers as they work through the high stress of the job.

No city councilmember asked about racism, social justice, equity and hate crimes, all of which have been at the forefront of city discussions on the future of policing here. They also did not ask questions about officer accountability, and nothing was asked about the police department audit the city finished in late June. A source close to the council told My Edmonds News that they have not received any information on the audit yet. 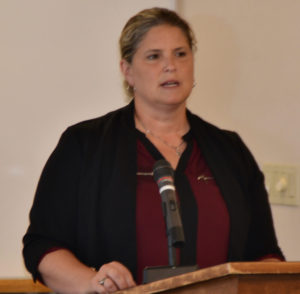 Michelle Bennett has been Acting Edmonds Chief since March. Bennett had just retired in January as a Major with the King County Sheriff.  While with the Sheriff’s office, Bennett served as police chief in Maple Valley and Sammamish (both cities contract with King County for police coverage). She has been head of the county’s Southeast Precinct, managed strategic planning for the sheriff and has taught at the Washington State Criminal Justice Center. Bennett has a Masters in Organizational Development from Central Washington University and a Doctorate in Education from Seattle Pacific University.  She lists 17 years of ‘command level’ experience. An anti-bullying curriculum she created is now a national model. 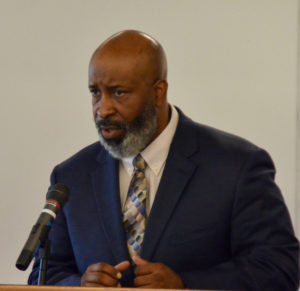 Lawrence Hunter is a retired captain with the Waterbury, Connecticut Police. His resume shows 13 years of “command level”experience. Hunter administered the Professional Standards office for Waterbury Police, overseeing internal affairs and training. He retired as commander of the midnight shift, a position he took to spend more time with family and pursue advanced degrees. Hunter has authored a book on police reform and has taught at the Waterbury Police Academy. He has a master’s degree in forensic psychology and is working on a doctorate in leadership. After retirement, Hunter also formed a consulting firm to help prospective officers prepare for careers in law enforcement. 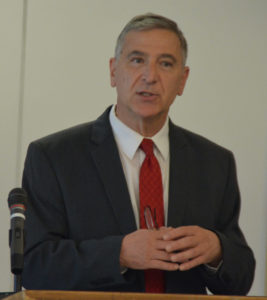 Dante Orlandi retired as a major with the Pennsylvania State Police after a 34-year career in the ninth largest police force in the U.S. Orlandi has 17 years of command-level experience as a major and before that a captain responsible for overseeing wide sectors of state police operations throughout Pennsylvania. On the operations side, he was — in the rank of major — responsible for 30 state police stations and 1,500 officers. One of Orlandi’s command positions included Philadelphia County, the most populated in the state. He also served as director of the state police drug law enforcement division. When Orlandi retired, he was director of the agency’s records and identification division.

Councilmember Vivian Olson: “We are listening to the national discussion about police reform and the reasons behind it. At the same time, our community does appreciate law and order. Why are you the right person to navigate that balance?”

Bennett told the council she recognized the movement towards a “gentler, more interactive, more relationship based” efforts, that communities are “trying not to treat everything as a criminal justice issue and yet keep neighborhoods nice and safe.”

At the Washington State Criminal Justice Training Commission, officers who were once called “warriors”  are now regarded as “guardians,” Bennett said. As part of that, she told the council that during President Obama’s administration, the government proposed that police work to restore trust and legitimacy, enhance policy and oversight, and expand technical expertise and social media as well as make connections with communities. “One of my biggest passions is creating community programs, to create the feeling that ‘hey, somebody at the police department knows my name,'” Bennett said. Major parts of that, she added, include better training and education, and programs in officer wellness, safetyand de-escalation in tense situations.

Orlandi calls himself a law-and-order guy; “it’s what I grew up with on the job.” He continued, “police reforms – some of it is just silliness; I don’t think they understand what they want.” But he  acknowledged that some of that reform is important, “that a lot of times, there’s substance behind those complaints.” Orlandi suggested, for example, that a database on officer assaults is a good thing and helps the community. He too cited the Obama administration’s efforts on reform, adding that his own experience “dovetails with 21st century policing and helps me understand which things are practical and which are not. If there are some police reform points that are good, let’s talk about them, but one size doesn’t fit all; things that may work in Lancaster (Pennsylvania)  may not work in Edmonds.”

Hunter noted: “I grew up very poor without a father; as far as the public conversation, I understand why complaints against police are growing.” He decided, he said, to become part of the solution. “I understand both sides of the coin; I understand why police do what they do; why they talk the way they do; why they think the way they do.” He told the council that “my goal, my passion, is to bring the two sides together. Often, we’re seen as an enemy; but we are there to protect people; it is not easy; it is constantly evolving.”

Councilmember Susan Paine:“How would you integrate the new laws of Washington state into policies and procedures for the Edmonds Police Department?”

Orlandi said he did not know all the details of Washington’s new laws, adding “I know where some laws restrict police pursuits or military type equipment; (the key) is how do you get buy-in where there is new policy that is “unpopular” (among some officers and public). He told councilmembers that “big, fortified armored vehicles saved officers lives and citizens lives.” If lawmakers say, “I can’t use them, then I have to find other ways around it,” Orlandi said.  The goal, he added, is still to protect officers and the community; “it’s what in our hearts that counts; we work for you; if the law says we can’t do a pursuit, we’ll have to find another way. “I’m not going to back away because it’s hard work,” said Orlandi, “that’s the job, to be in compliance with the community and the laws they enact.”

Hunter told the council he does not have all the local background yet, but that he does “have a great understanding of the intentions of the laws.” He would, he said, meet with the city’s attorneys and is prepared to “change policies and procedures to make sure everyone has a great understanding.” Hunter then said “these laws are not popular in Connecticut (his home state) or in Washington”; but, he added, “it’s about public safety, understanding them and putting them into practice… to keep people safe.”

Bennett said she has worked with the city attorneys and assigned each sergeant one of the new bills to “go over every word” to try to determine how they will affect the department. We will, she said, get out in the community to explain the impacts as well. “We’re not going to stop going out on community patrols,” added Bennett; “we’re going to be out and present as a community force, building relationships. I don’t want anyone in Edmonds to feel like we’re de-policing.” While Bennett said “we are community stewards,” she added that the changing laws “might create more time and distance and space (when responding); “we’re going to maintain community safety and policing.”

Councilmember Diane Buckshinis: “Edmonds has a $12 million police budget; overtime has averaged $400,000 a year for the past decade. With national talk of defunding, there are some departments who partner with public-private partners to work together. Your opinion of this idea and what might be the budget impact?” (She cited a Eugene, Oregon program called ‘CAHOOTS’ — Crisis Assistance Helping Out On The Streets — which sends mental health counselors instead of police on some calls.)

Hunter: “I am totally in favor of the “CAHOOTS” model and was the first officer to train on that in Waterbury.” He mentioned that on a podcast he hosts, he has recently interviewed one of the founders of that program. The funding, said Hunter, still comes out of the (city) budget for protective or emergency services. “In the short run,” he added, “that can scale back the need for officers  to respond to some services and could impact the budget.”

Orlandi: “It is difficult for me to say. I don’t have a full grasp of how it would work. You don’t want to put people in harm’s way and things can go sideways quickly.” He added that, “I’d have to know more specifics about what they’d be involved in. It doesn’t sound like something that would be appropriate. If we had a mental crisis person with law enforcement, that could be a good thing to do.”

Bennett told the council that “the model is good. Law enforcement should work in a team environment, preserving and protecting the person and property, but we can’t negate the safety piece.” She added that “as long as it’s safe, it’s brilliant. Arrest, jail, how does that work? The goal is not to arrest and jail but to help solve the person’s problem.”

On Wednesday night, the city hosted a meet-and-greet with all three candidates that was open to the public, an event that drew about 40 people to the Edmonds Library Plaza room.

Mayor Nelson will determine his choice and announce it. Last time, he took only a matter of days to state his choice. That nomination will then go to the city council for review and a public hearing.  The council can only vote “yes or “no” on the candidate. It does not have the power to suggest another candidate.