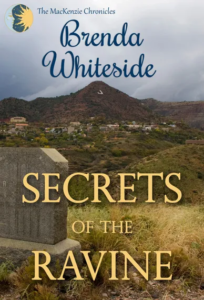 Secrets of the Ravine, by Brenda Whiteside

Shopkeeper Magpie MacKenzie’s emotions are in turmoil. Questions surface once again about an unsolved murder, and the disappearance of her teenage love from the Ravine decades ago. Will the mystery behind this tragedy in the Ravine finally be solved? Is the answer of what happened to her first love, lost to her with no explanation, about to surface and shock town residents? What ominous revelations will come from answers revealed? For family members who secretly harbored doubts about each other possibly being a murderer, will the truth be what they’ve feared the most? Is one among them the murderer?

The same day skeletal remains are found on the edge of town, a tourist keeps people talking about his striking resemblance to the ill-fated, long-missing young man named Mark. Magpie Mackenzie was stopped in her tracks at the sight of this lawyer who so looks like a mature Mark. As investigation into the unsolved murder is reopened, Magpie finds that this lawyer, Zack, wants to help her. He’s eager to do what he can for her, and he’s also curious about the strange feelings of deja vu he’s feeling. Together they uncover clues to what happened that tragic night in the Ravine. What they discover is darker than ever suspected, and puts both Magpie and Zack in grave danger.

While they partner in this investigation, Magpie struggles not only with the mystery but also with her feelings toward Zack. As she gets to know him, are her romantic inclinations due to the reminders of Mark, or truly what she sees in Zack? And if her feelings are true, what is it that he feels for her? Could they have a future together, or is their connection only fleeting?

The people who live in the Ravine remain devotees of a hippie lifestyle. The author presents an intriguing picture of this community of characters, skillfully comparing and contrasting their present day to their past. The Secrets of the Ravine are destined to finally see the light of day, no matter the consequences.

Wendy Kendall is an author with The Wild Rose Press. Her mystery “Kat Out of the Bag” is available and also the prequel “Purse-Stachio Makes A Splash.” She is a volunteer at the Friends of the Edmonds Library.