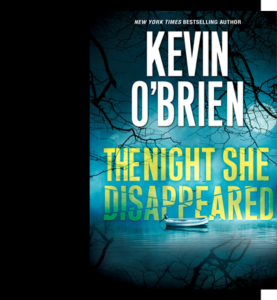 The Night She Disappeared, by Kevin O’Brien

What happened last night? Anna Malone is a Seattle TV reporter. Viewers rely on her to be observant, know the facts on a scene, and report clearly. Today it’s the morning after. She’s in pain, uneasy, thinking through a brutal hangover. She can’t remember last night. At one point she was at a dinner with her lover and his wife. Talk about an awkward, odd situation. How she ended up at that table is an odd enough story on its own. All memory of what happened after dinner is gone. And today so is her lover’s wife.

Award-winning author Kevin O’Brien has written another chills-up-your-spine, lock-all-the-doors, riveting suspense thriller. Where is Courtney? Why has she disappeared? Is she alive? Who knows what happened? Whoever knows, will they say Anna’s lover did something wrong to his wife? Will they say Anna did it? Are you on the edge of your seat yet? You will be, as you read more and more about the mystery, the suspects, the motives and events leading up to The Night She Disappeared. You may want to check on your own alibi.

Against the backdrop of scenic Seattle, Anna tries to work through what could have caused Courtney to disappear. As clues start pointing in her direction, threatening her TV ratings, her job, her secret affair with Courtney’s husband Russ and her sanity, Anna is determined to investigate on her own. She will clear her name, she fervently hopes. Maybe Courtney will turn up and end this torment.

Like the lake Anna’s houseboat home floats on, Courtney’s life under the surface is teeming with surprises. Other suspects with intriguing motives create disturbing twists and turns. Thankfully, Anna has some friends she can lean on. She also has TV network competitors who delight in launching sensational attacks against her personal reputation. It’s disgusting and alarming, and since Anna still can’t remember, it’s terrifying. And there’s someone out there who keeps contacting her with messages that they know what happened The Night She Disappeared.

This is truly a thriller of a story. The characters are all so well developed and credible. You get time with every suspect so you can make up your own mind on guilt or innocence. The Seattle setting can’t be beat and certainly contributes a scenic contrast of beauty against danger in our region. This author know Seattle so very well, and those details greatly enhance the excitement of reading about the events in the story. Kevin O’Brien weaves a tremendous, action-filled plot that’s driven by spellbinding characters.

Wendy Kendall is an author with The Wild Rose Press. Her mystery “Kat Out of the Bag” is available and also the prequel “Purse-Stachio Makes A Splash.” She is a volunteer at the Friends of the Edmonds Library.