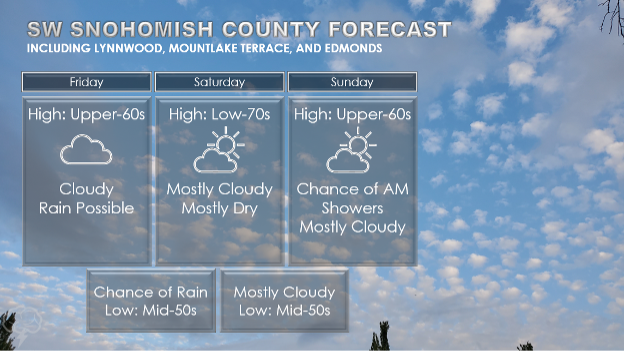 We made it through another heat wave! This one was not nearly as bad as the one we saw toward the end of June, but it still definitely packed a punch, especially considering the added blow of wildfire smoke.

The warmest of the days was Friday, maxing out at 91 degrees at Paine Field. This set a new daily record high for Aug. 13, with the previous high being 86 degrees. In fact, Thursday also set a new daily record high, reaching 87 degrees (previous record being 85). Saturday ended up not being quite as warm as expected, perhaps due to the smoke preventing us from warming up to the fullest extent.

Speaking of smoke, below shows a chart of the air quality index (AQI) for the past week.

As you can see, the worst air quality we saw was on Friday the 13th (how fitting). According to this chart, we peaked at an AQI of 92, falling into the “moderate” category. As a reference, the next highest category—unhealthy for sensitive groups—begins at an AQI of 101.

Thankfully, we didn’t see severe impacts as a result of our air quality. You could definitely smell the smoke, but it wasn’t enough to cause widespread health issues. Fingers crossed that that is the worst of the smoke we see for the rest of the season.

This weather this weekend will be quite a stark contrast to what we saw last weekend. The reason for this is a couple of weak, upper-level lows, which are expected to graze us — the first of which impacts us Friday. You can see this in the model image below: 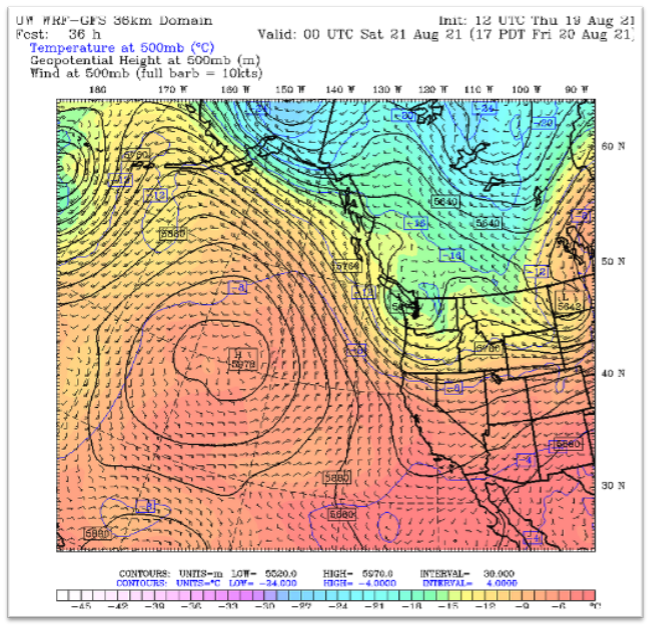 We should see slightly cooler-than-average high temperatures, along with the chance for some showers at times. Normal high temperatures for this time of year are in the low 70s, and we may stay just below that, in the upper 60s. Skies are expected to be mostly cloudy as well.

Saturday is looking to be the warmest day of the weekend, but not by much; highs are expected to be in the low 70s. The sun could peak through the clouds at times throughout the day. Still, we may see a few lingering showers Saturday morning, but besides that, we should be mostly dry.

Another system comes by us from the north on Sunday, again cooling us off slightly and giving us the chance for a few showers.

As we head into next week, it appears that an upper-level ridge will take shape over our area, allowing us to warm up a bit in the first half of the week. Nothing too hot, though, with highs expected to be near the mid 70s.

It’s looking like we will get a brief taste of fall over the weekend. As crazy as it seems, we are getting closer and closer to that day—meteorological autumn begins Sept. 1, while astronomical autumn begins Sept. 22. I do enjoy the nice weather (when it’s not insanely hot), but I am quite excited for the cooler weather, more rain and all the fall scents.