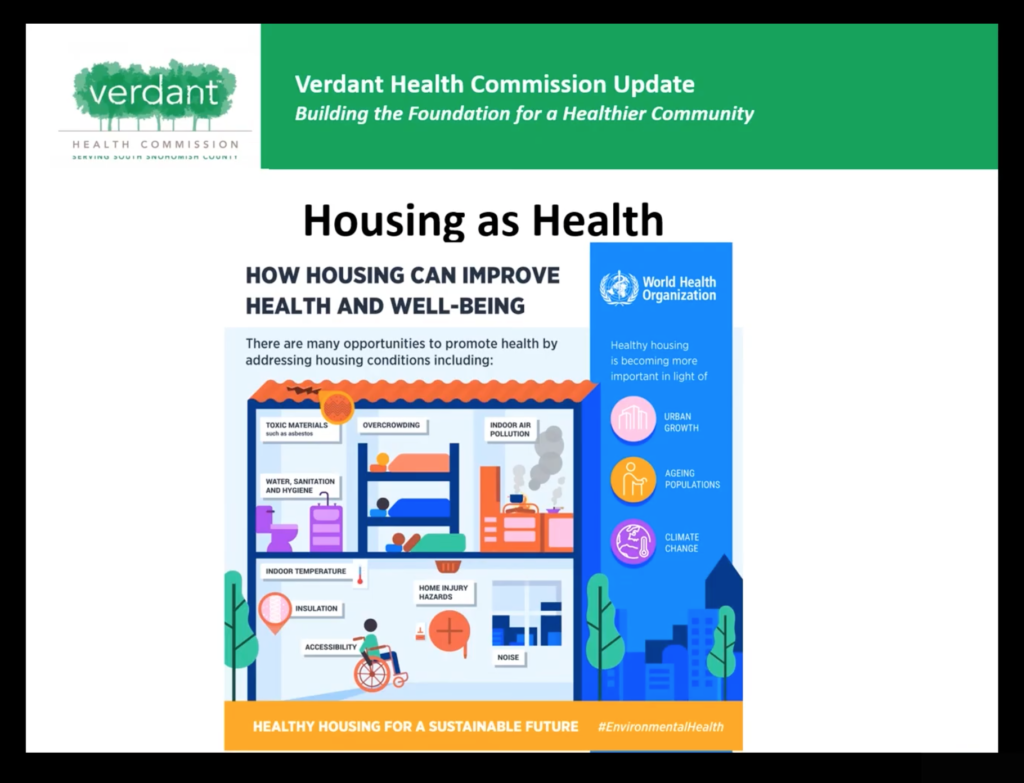 Housing in South Snohomish County is “a truly grim picture.” That’s according to one expert who spoke during a Wednesday night meeting organized by the Verdant Health Commission around the questions of where we are with affordable housing, where we need to be and the link between housing and health.

One after another, presenters from South County cities and nonprofits told commissioners that prices are going up, rents are going up, too few housing units are being built, the population is booming and incomes are stagnant. All of this creates an urgent need for a plan.  Since the state Legislature gave hospital districts broad authority to engage in any activities that promote community health, Verdant commissioners are considering what they can do to participate in solving the housing crisis, and thus contribute to community health.

Verdant has approximately the same footprint as the Edmonds School District, and serves about 180,000 people in Edmonds, Esperance, Woodway, Mountlake Terrace, Brier, Lynnwood, plus small pieces of Bothell and unincorporated Snohomish County. The Verdant Health Commission is the government overseeing South Snohomish County’s Public Hospital District No. 2. In addition to receiving rent for what is now Swedish Edmonds — the former Stevens Hospital that Verdant leased to Swedish Health Systems — Verdant owns some property in the hospital area, including the Krueger Clinic and the former Value Village property on Highway 99. That rent brings in about $11 million annually, and Verdant also receives about $2.4 million annually in tax dollars for operations and maintenance. Verdant operates a wellness center in Lynnwood that offers a range of health-related programs, and also provides community grants for local health and wellness programs.

Time after time at Wednesday night’s virtual meeting, planners and experts emphasized the clarity of the research that shows permanent housing increases health. Children benefit when they have a home, as do people with chronic disease and mental health issues. Society benefits overall. The problem is how to provide enough housing that people can afford. 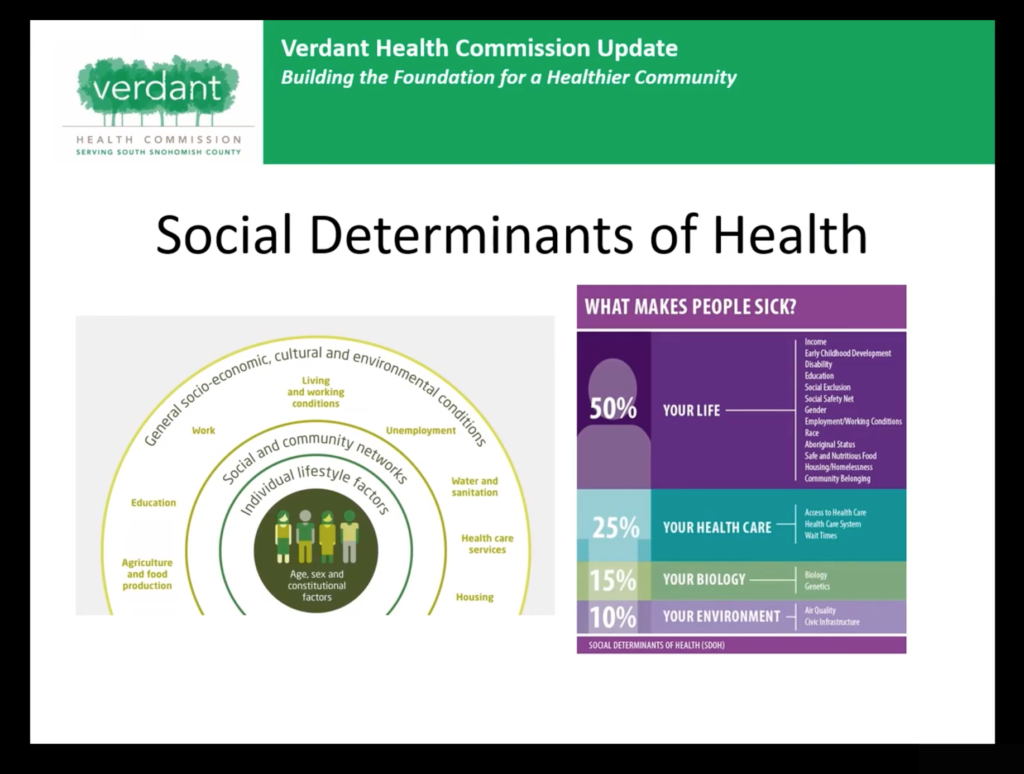 Verdant, she said, could consider a variety of initiatives. For example, she suggested creating respite housing for post-hospital stays, participating in a national coalition to promote prescriptions for housing, building housing developments with a health element included, or looking for publicly owned, tax-exempt land to develop for affordable housing.

The Director of Human Services for Snohomish County, Mary Jane Brell Vujovic, described the work of the Housing Affordability Regional Taskforce (HART) to create a five-year plan to address the issue. “The challenge is huge: South County will have a million-plus people by 2040 and the cost of housing is rising much faster than incomes,” she said. “Teachers, nurses, firefighters, all struggle to afford housing here.” The two most expensive ways to house people are jail and emergency rooms, she said, and “we do a lot of that.”

City of Edmonds Associate Planner Brad Shipley pointed out that a third of all Edmonds residents are cost burdened, meaning they have to spend more than 30% of their income on housing.  The city has a shortage of small units, yet most households are just one or two people. It’s an aging population that wants to age in place. Like other cities, Edmonds is short of housing in the “missing middle” — units that are not single-family detached homes and not multi-story apartments or condos. Townhouses and cottages are among the other options that most cities in this region admit to “missing.” Shipley reviewed the recommendations of the Edmonds Citizens Housing Committsion to the Edmonds City Council, noting that those are still under review.

City of Mountlake Terrace Seniro Planner Edith Duttlinger echoed all those concerns, adding that her city has 65% single-family homes. The city council did vote to allow cottage housing, ADUs, mixed use and townhomes, and she expects more development when Sound Transit’s Link light rail station opens in 2024. “This is a difficult issue,” she said. “There are no easy answers. There are no cheap answers. Sometimes politics makes it all more difficult.”

City of Lynnwood Senior Planner Kristen Holdsworth described that city’s five-year Housing Action Plan and recognized they have already activated much of the plan but still have much to do to accommodate a growing and increasingly diverse population.

All the experts concurred on one thing: There isn’t a choice between growth and no growth. The choice is between planned growth and unplanned growth, which is very expensive down the road. Shipley had a warning, “If the cities don’t plan for growth, the state will step in.”

Verdant Commissioner Deana Knutsen was struck by the fact that often cities were not able to move forward even though they had all the research and had even done a great deal of planning. At least two presenters mentioned the difficulty of making progress through some challenging political climates in their cities.

“I’m most concerned,” Knutsen said, “about how we make people comfortable and it doesn’t become a NIMBY (not in my back yard) problem.”

Commissioner Fred Langer said he is amazed at the scope of the problem. “This board is keenly aware that homelessness is a marker for health; but the problem is so big, I just hope we, as a community, are up to the task.”

Commission President Bob Knowles ended the meeting by saying there was a lot of review and there will be no next steps for Verdant until they can review and engage the community.