Updated Sept. 24 with a response from Mayor Mike Nelson and on Sept. 28 with an edit to a quote from Economic Devvelopment Director Patrick Doherty

COVID frustration and fatigue are taking a toll on some of the city’s front-line workers. It’s not the virus itself; though several of the 88 staffers in the City of Edmonds Public Works Department did come down with coronavirus. It’s the fatigue as they watch many other city employees continue to work from home, and the frustration of thinking city administrators don’t respect them and what they’ve done, day after day, for the past 19-months.

Their department chief, Public Works and Utilities Director Phil Williams, told me “I understand the way they feel; some of it’s  inevitable, based on their jobs. We did everything we can do to protect them at every step, and we still are.”

But more than a dozen city front-line workers agreed to meet with me, in a group, to air their grievances. They had never done this before and requested anonymity, concerned they said, for their careers. One of them put it this way, “I feel like we are the ones that literally run the show of this city, keeping the infrastructure running, but yet we get treated like ‘the little stepchild.'”

The 88 men and women of public works maintain the sewers, storm drains, streets, water system, wastewater treatment plant and city buildings. There have been at least three COVID cases in the staff; all have recovered. Some staff members — the engineers and inspectors — have been able to work from home, but everyone else is in a truck or on a job every day.

One of the allegations reads: “The city has spent significant taxpayer dollars remodeling the 2nd floor (City Hall) to make safe work environment, yet still have not required employees to return to work…”

The online complaint claims a city administrator said Edmonds didn’t need hazard pay “because they are all working from home.” The complaint also accuses the mayor and city council with “failure to protect their front-line workers and families…”

Human Resources Director Jessica Neill-Hoyson said that when the pandemic hit in 2020, the city split up the work teams for those who still had to come in, like those working in public works and parks. One team worked one week, the other team was home on call; they alternated work weeks until Edmonds got enough personal protective gear and set safety protocols.

Patrick Doherty, the city’s director of economic development, reviews the hotline tips. I asked if the city would investigate the complaint. He told me that upon initial investigation, it was evident that some of the complaint was not true, and some was due to misunderstandings, so “no further investigation is necessary,” he said. “We know what we required of various units of employees.”

Initially, the workers were awarded hazard pay, money coming from the federal government. That ended in June of last year. Splitting public works into rotating weekly shifts also ended then and that, the workers say, made no sense. They argue that practice meant trucks with them riding shoulder to shoulder. One said, “I worked with a guy who tested positive and had to quarantine for two weeks, but I was back to work the next day.”

Public Works Director Williams admitted there are what he called ‘built-in disparities” but said that his department cannot work from home. He insisted that “we have done everything we could for the maintenance people, keeping their vehicles clean, wearing masks, opening truck windows to bring in fresh air.” As for trying to assign just one person per vehicle, “that’s not efficient,” Williams said, “but the priority is health.” He pointed out that the main public works office now has two air scrubbers to make conditions safer inside. The workers claim the air scrubbers showed up just recently, after their complaint hit the tip line. 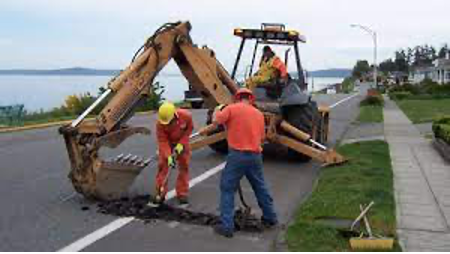 The public works employees belong to the Teamsters Union. Their contract was up last year, but the members agreed to extend it because of COVID. Negotiations will start again soon. But all those who met with me insist their complaints are not a union ploy to take to the bargaining table. Their boss, Williams, agrees. saying he doesn’t think the frustrations they are voicing will be an impasse for negotiations.

So, I asked the workers: Have you taken your gripes to the mayor or the city council? They all said they have not. “Do you really expect that we can go to the higher ups at city hall and say anything to them?” asked one. When pushed on that point, several said they don’t believe the mayor, or some councilmembers, would listen.

Mayor Mike Nelson told My Edmonds News that the pandemic has been hard on all city workers.

“I appreciate our public works employees coming forward to share their concerns about COVID-19 working conditions,” he said. “I acknowledge the frustrations they have had and continue to be experiencing.”

Nelson added that he values their critical role and will listen, adding: “I look forward to meeting with the concerned employees.”
After a half hour of discussion, what came up again and again as they spoke was the topic of respect — and the lack of respect they feel. “We take pride in what we do. We work for the citizens, we’re always there to give you the best, but we’re not treated the best by the people that are supposed to take care of us,” one worker said.

Phil Williams said he hopes he has some better news for his staff. “I understand their pain. I am working with city management to see if we can get the council to provide some financial gesture toward them.” What that would amount to, he does not know, but said it could be similar to what Snohomish County awarded to its front-line workers for “a recognition of what you do.”

The 14 who talked to me had never gathered in a group before to sound off on their frustrations and fatigue. They know that ultimately, everything will not be “equal and fair” for all Edmonds employees — some still will work from home; others still will have to show up. What they hope is that they have gotten the city’s acknowledgement and respect. Williams knows it; “I could not be more proud of what they’ve done,” he said. Those 14 and all the other front-line workers want the city to remember that, as one worker put it, “we answer the bell every time it’s rung, in all sorts of weather and we get the job done.”