Readers, I know my column is supposed to be restaurant reviews, and there is mention of food in the text, no worries – but this post is also a love story. Multiple stories of love, sharing, and caring; a way to expresses my esteem for the camaraderie that exists in our community.

Local chefs, cooks and crews who do business in Edmonds and the surrounding area share in a way that is best described as “Aloha.”

Aloha means hello. It also means goodbye. Aloha is also a moral code, an expression of love and a connection to nature.

I needed a better definition.

A friend from Hawaii pointed me to a website  and the explanation of the phenomenon.

“Aloha” best describes what I witness, from the “pay it forward” Post-it’s on the wall at places like Ono Poke, to the collaborative sharing of resources to build the streateries that helped many locations stay open last winter, in the face of COVID constrictions on their abilities to serve food and drink in a safe manner.

Here are some stories that exemplify the concept:

Pizza, hot from the oven, has become the premier pandemic comfort food. Our community is home to many pizza purveyors, and here’s news on the latest concern baking tasty circles of dough loaded with delight.

Niles Peacock, owner of Niles Peacock Kitchen & Bar in the sprawling Salish Crossing complex at Dayton and Sunset, phoned with great news — breathless as he shared events of the last few days. His brand-new oven, a Marsal double-stack unit built in Vermont, will finally see some action.

Niles Peacock Kitchen and Bar is open at 178 Sunset Ave. S.… finally! The location has been fraught with delays for weeks on end. Timing of inspections and re-doing the work called out during the same have seemed to go against the opening of his newest endeavor.

Pizza makers got hired, and then disappeared, before they ever flipped a circle of dough in the air. Crazy circumstances and events seemed to threaten to the opening. Niles needed to focus on the bar and mixologist duties, so who’d train up the newbies in the kitchen now?-

At the last hour… literally in the last few days, some “Aloha” energy, from our community of entrepreneurs, came to Peacock’s rescue.

Collaboration via Steven Ono, who shared a contact with Niles, led him to Sourdough Willy’s Will Grant, who’s a world-champion pizza maker.

Peacock caught the next ferry, thank goodness. I had visions of Niles swimming across if he couldn’t make the boat — he was that psyched.

Long story short — the guys met and collaboration happened. Turns out Sourdough Willy’s recently opened a new dining room and bar right behind its street-side Slice House. Guess what? Grant could use a bit of “help” with the bar!

Never one to be shy about his accomplishments, Peacock offered his expertise.

The two compared notes. Both Peacock and Grant won titles during the same calendar year. Peacock was voted best bartender in the December 2017 Best of Western Washington competition sponsored by KING 5 TV. In September of 2017 Sourdough Willy competed for and won best pizza in America, and his manager won second place using Willy’s dough.

Serendipitous, to say the least.

Locals have been “treated” to a preview of the upcoming fare at Niles Peacock Kitchen and Bar. Here’s a sneak preview on Peacock’s pies: Unique combinations of sweet/savory toppings like the “Hot Date” and more traditional pepperoni- and veggie-topped pies too. All on a crust that is amazing, tasty and — we were told —  “no sugar added” to any of the pizza dough served up in this establishment.

Pies come out of the oven, served up on “slices” of trees.

Repurposing is a theme repeated in the décor: Barback wood shelves donated from another location and counters manufactured from old table tops donated from his friends at Epulo, are more examples of the sharing and support of the local restaurant community.

Family love: the bonds are strong and the support is amazing.

One baker’s journey with community support

I spoke with our friend Conor O’Neill regarding his journey in baking, from sharing bread and goodies in his Lynnwood home driveway to the opening of a retail location called the Cottage Community Bakery.

“Mid May of 2019,” Conor says, “I had started collecting restaurant equipment and other ‘must-haves’ for what would eventually become my cottage home-bakery.”  O’Neill began making cookies, buns and pretzels for gifts to local restaurants, essentially for just a critique in return.

Baking efforts produced volume beyond expectations. His dad “suggested” that Conor set up a table in the neighborhood and give some treats away to neighbors who passed through. Traffic from neighborhood yard sales hosted in Lynnwood’s Blue Ridge neighborhood each summer created further demand. “Success, simply through word-of-mouth marketing and a bit of social media, encouraged me,” Conor says.

He set his sights on starting an official cottage business.

June 25, 2019: “I filed for my paperwork through the Department of Agriculture, secured my local business licenses, and began finding ways to bake more bread for the growing demand from neighbors.”

He adds: “It’s a process of trial and error — both in the kitchen and in developing a business model.” O’Neill estimates he’s baked over 50,000 loaves of bread. He credits the sharing and support from the online baking community for his education as a baker. “Tips of the trade” he says, “shared freely” by others have been crucial to the learning curve, and his success.

June 25, 2020: One year later, COVID circumstances pivoted many business fortunes and in Conor’s case, success meant he’d “graduated.” No longer in the category classified as a cottage industry, he baked from a catering space and pop-ups in Perrinville boosted the sales volume. The search began for a permanent retail situation.

“My siblings and parents helped sell these items each weekend in Perrinville,” Conor says, sharing that his brother Aidan is the general contractor for his new retail shop  located a block from where Perrinville pop-ups happened.

Ovens, as mentioned above with pizza production and of course, loaves of bread, are crucial to the crust on both products.

To support the core of what was formerly known as The Cottage at Blue Ridge and now the Cottage Community Bakery, Conor purchased a Rofco B40 oven, handmade in Belgium. This allowed him to bake 12 loaves of our sourdough bread per hour.

“I learned about these ovens through some baker friends on Instagram that I had been following since college,” he says. “I used a countertop half-pan convection oven to bake the other items we offered at the time: cookies, pretzels, burger buns, etc.”

His newest acquisition for his retail shop is an oven acquired from a retired baker in Everett. COVID pushed this fellow into retirement; he was ready anyway, he said. He also “loved” all that Conor was doing —  the sourdough-style breads, the wheat sourced from local stone-milled grains like Cairnspring Mills. It excited him and he wanted to help out.

His gift, more Aloha magic, was the offer of his Winkler Columbus C model oven: 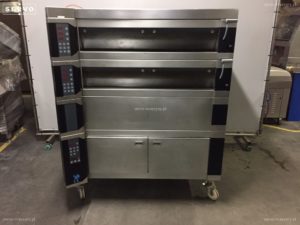 Moving it to Conor’s new location was no small task, but certainly a benefit over the purchase of a new unit.

Conor encourages budding bakers, on all levels: From folks who want to sell a few pies at their farmer’s market to those whose dream is full-scale retail business: “It is totally possible,” he says.

Congratulations are in order

Cheers to our local owners of Leftcraft, Jamie Butler and Travis Eaton. They beat out a Chicago and Brooklyn, N.Y. based restaurant as finalist.

McMurray says it’s “pretty inspiring for an Edmonds restaurant to be competing at this level and helping support Edmonds as an upscale and evolving food destination.”

Proud of Leftcraft owners and the effort they put into this restaurant.

Daunting challenges for “dining inside” these days

Readers have asked for updates on the restaurants in our area that might require not just masks for indoor dining, but proof of vaccination or a negative COVID test before entry.

This recent article offered a link to a list of over 150 Seattle restaurants that do so. In Edmonds, the owners of Maize and Barley have stated the intention to require vaccination status for inside dining. Kelnero and Vinbero are still considering options at the time the article was published.

Restaurant News polled the community, and so far the additional responses are to “not” have such a requirement.

Jeff Barnett of Salish Sea Brewing Co. responded: “We will follow state and county guidelines as requested. Currently we ask all guests and staff to have a mask on when not seated. Please stay home if you’re sick, be polite, respect others, and be patient.” Barnett notes that both dine-in or outside dining and takeout are also available. “Thank you for your continued support of small family-owned businesses,” he said.

“We will not be asking for proof of vaccination, unless Snohomish County starts requiring it,” reported Johanna Limberopoulos regarding the Rusty Pelican Café in Edmonds. “We do require masks. We have outdoor and indoor dining available.”

Portofino Restaurant & Bar management team reports no need to enact requirements on this issue, as “we are only doing delivery and takeout at the moment.”