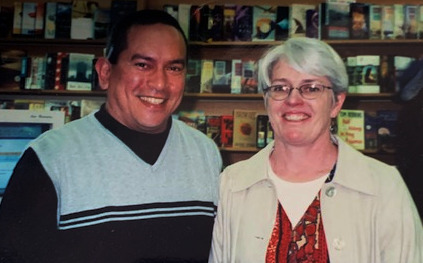 Life is changing for Mary Kay Sneeringer, former owner and now part-time staff at the beloved Edmonds Bookshop. For the past 20 years, Mary Kay has shared her love and knowledge of books with us, the people of Edmonds.

If you want a book she didn’t have, never fear. Mary Kay will order it for you. Pronto!

Wonder what a certain someone might like to read? Mary Kay pulled suggestions out of her vast mental store of book ideas to help you make the perfect choice. She’d even gift-wrap it.

How it all began…

A love of books and bookstores found Mary Kay working at the University Bookstore near the University of Washington. After all, there’s no happier place to be than one surrounded by books.

Another booklover, Dave Brewster, also worked there. They met, married, had two kids and moved to Boston, where Dave worked as a publisher’s representative while Mary Kay raised the kids. After all, they were in complete agreement as to the silly notion of ever owning their own bookstore. Not in this lifetime.

Seven years later, they came back to live in Edmonds. Mary Kay got a job at a bookstore in Wallingford, once again happily surrounded by books. Dave worked at Starbucks in their books and CDs department.

One day, a palm reader at the annual Starbucks Christmas party noticed that Mary Kay’s career line broke in the middle, and that it crossed deeply with her success line. The palm reader suggested Mary Kay start her own business. Mary Kay looked at her and laughingly replied, “Yeah, right, I should buy a bookstore.”

Two days later, choosing a nicer-than-usual wine for Christmas Eve was on the errand list. Mary Kay wanted to support downtown Edmonds, so shopped at Arista Wine Cellars, which was then located next to the Starbucks at 5th and Main.

While walking past the Edmonds Bookshop, she noticed a sign in the window: “This establishment is for sale”.

Over the holidays, Mary Kay and Dave went back and forth, yes or no, hemmed and hawed, wondered about the effect on the kids. As we all know now, they decided to go for it. On March 1, 2001, they took over.

Or did they? One early discovery for the new owners was how the Edmonds Bookshop truly belonged to the people who already shopped there. They were the true “owners” of the bookshop. Regulars came in and laid claim to their shopping heritage and let Mary Kay know it was going to continue that way.

When big box stores invited customers to take a photo of a book and send it to them, offering a $5 coupon in return, that ticked off a lot of Mary Kay’s customers, who then came in to proudly buy their books from her instead, at full price.

Some of Mary Kay’s happiest memories revolve around her bookshop parties. The Harry Potter book release parties at midnight. The Waldo parties. The “Guess Which Plant” parties where a wrong guess awarded the “winner” some nightshade!

“If I had known how much ‘giving’ comes back to you, at the start, I would have been less fearful,” she said. “When I first took over the store, all these people came in asking for donations and auction items, and I just wondered ‘How can I do this?’ Then at some point it occurred to me that the more people I say ‘yes’ to, the more people would then have a connection to the bookstore. They came in asking for help and I said ‘yes…’ That really was a revelation. I wish I had known that from the beginning.”

It is now 20 years later, and Mary Kay and the Edmonds Bookshop survived 9/11, the Great Recession, big box bookstore $5 discounts, Amazon’s takeover of book sales, the massive adoption of e-books, and now a pandemic.

What does the future hold?

“Now I get to read books in daylight hours!” Mary Kay quipped.

Mary Kay is also looking forward to getting her garden under control. One other great piece of news is that her first grandchild is due in January!

She will also continue to work as a staff member at the Edmonds Bookshop and be surrounded by her beloved books, ready to answer more questions from us all.

12 Replies to “Mary Kay: The woman behind the Edmonds Bookshop”