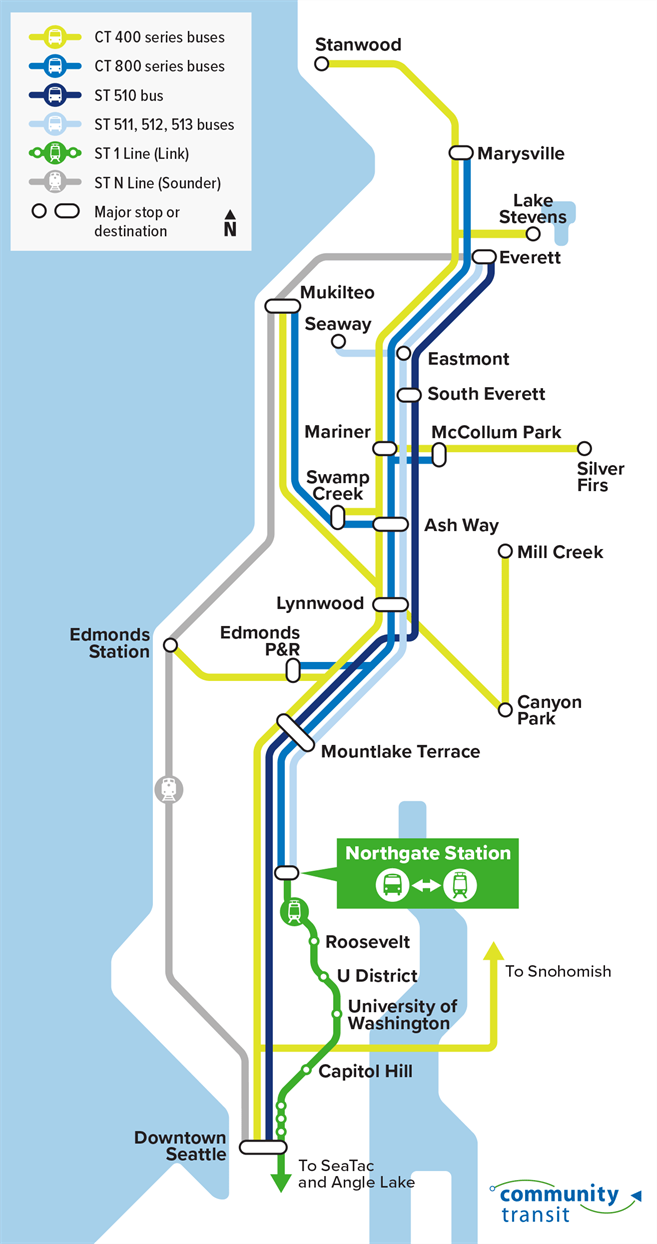 The biggest change is the connection of all Community Transit 800-series bus routes, and three Sound Transit bus routes (511, 512, 513), to light rail at Northgate. Those buses will no longer serve the University of Washington, U District and downtown Seattle directly. Instead, riders will transfer at Northgate Station and board a light rail train on the 1 Line (Link) to any of those destinations.

In addition to the bus-to-light-rail connections at Northgate, some local routes will have trips added to accommodate increasing ridership, and there are several minor route changes in north Snohomish County.

Full details of the fall service change are at communitytransit.org/newservice.

Since mid-August, Community Transit staff has been talking to riders at transit facilities, speaking to community groups, and will host two virtual meetings to help customers map out their bus-to-light rail trips. These meetings are scheduled for Sept. 24 at 12 p.m. and Sept. 27 at 6 p.m. Follow Community Transit on Facebook or Twitter (@MyCommTrans) to get details on these events.

University of Washington start date: Fall quarter at the UW begins on Sept. 29. Community Transit riders will continue to take a bus directly to UW that first week, then make the bus-to-light rail connection the second week of school, starting Oct. 4.

Additional service changes near UW: King County Metro is changing its bus service around the UW campus. Riders should check Metro’s fall schedules for possible connections at the U District and University of Washington stations.

Bus riders on the 500- and 800-series routes are encouraged to use ORCA cards to take advantage of the two-hour transfer window, in which your bus fare will include your ride on light rail. Light rail fares are calculated by distance, and the current maximum light rail fare will be $3.50. Be sure to tap on and tap off when you ride light rail. People paying with cash will have to pay for each trip separately.

Northbound bus frequency: On weekday afternoons and evenings, 800-series routes will leave Northgate Station every 15-minutes to ensure quick trips back to Snohomish County. Sound Transit’s 511, 512, and 513 will also provide service to Snohomish County every 8 to 15 minutes, depending on the route.

New trips from Northgate: King County Metro is changing its bus service at Northgate. Snohomish County riders should check Metro’s fall schedules for new trip options, such as to South Lake Union, as well as First Hill and Cherry Hill.