South County Fire is investigating a three-alarm fire that occurred early Saturday morning in the 22300 block of Highway 99.

At approximately 5:30 a.m., crews responded to multiple reports from passersby of a fire in Plum Tree Plaza, located at 22315 Highway 99. South County Fire spokesperson Leslie Hynes said it is unknown at this time which business the fire originated from. According to Hynes, the glow from the fire could be seen from “a few blocks away.”

The building was unoccupied at the time of the blaze and no one was reported injured, Hynes said.

According to Hynes, when firefighters arrived, flames were rolling out the front window of an Indonesian market, one of 14 businesses in the L-shaped building. It took firefighters about 40 minutes to get the fire under control. All businesses received smoke or fire damage.

Shoreline Fire, Northshore Fire and Snohomish Regional Fire & Rescue responded to assist South County Fire. About 75 firefighters were at the scene at the peak of the fire. 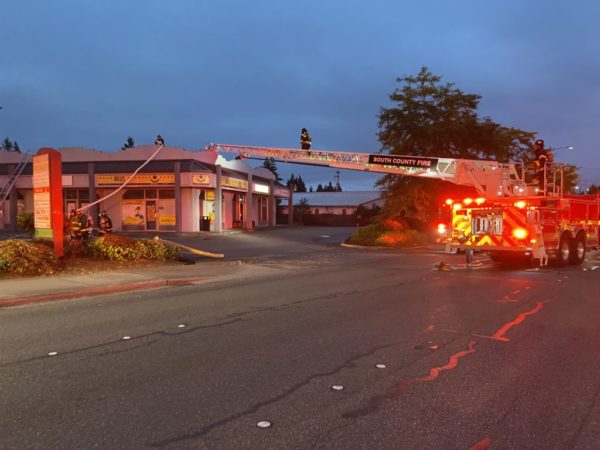