Balancing the needs of bicyclists, motorists and pedestrians during a planned bicycle lane project was a focal point for discussion during the Edmonds City Council’s Parks and Public Works Committee meeting Tuesday night.

For the past year, the city has been developing a plan to add over six miles of bicycle lanes in various Edmonds neighborhoods, funded by a $1.85 million Sound Transit Access grant. The city hired Blueline Inc. to provide collection and analysis of parking and traffic data in the affected areas, followed by community outreach that included virtual open houses to gather residents’ input. Following that, a set of alternatives was presented to the city council in May.

The project would install bike lanes in the following areas:

During Tuesday night’s presentation, City Capital Projects Manager Ryan Hague explained the various bike lane configurations, which the full council had reviewed during its May meeting.

Councilmembers Luke Distelhorst and Laura Johnson of the Parks and Public Works Committee were particularly interested in the proposed configuring of lanes along the busy SR 104 and 100th Avenue intersection, as well as traffic concerns further south on 100th, at the intersection leading to the driveway of the Woodway Campus — home to Edmonds Heights K-12 and Scriber Lake High School.

Councilmember Distelhorst, an avid bicycle rider, reiterated his belief expressed during the May council meeting that the delay for motorists — estimated at 28 seconds during peak PM traffic — under Alternative 1 was insignificant when compared with the enhanced safety the alternative provides bicycle riders.

By offering bike lanes in both directions, “Alternative 1 provides the safest operation,” he said. In addition, Distelhorst said that Edmonds should be “living up to” the city’s Complete Streets ordinance, passed in 2011, which requires that new transportation projects balance the needs of all users, including pedestrians, bicyclists and transit users. 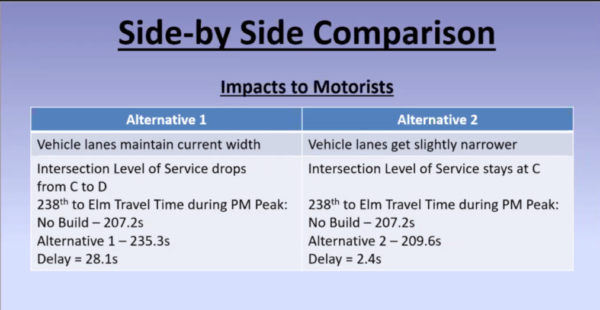 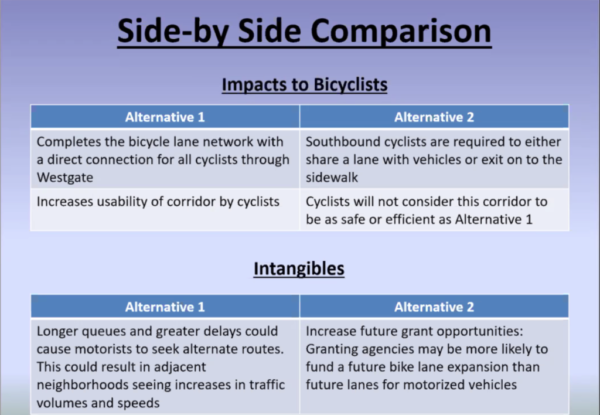 Both Hague and Public Works and Utilities Director Phil Williams noted that there was also a desire expressed by residents to include pedestrian improvements at various locations as part of the project, from flashing beacons to new crosswalks to curb ramp upgrades.

“We do have already enough (grant) funding to do the basic project,” Williams said, adding that pedestrian improvements would require additional city funding. Noting that not everyone rides a bicycle, he said that including some pedestrian and safety benefits may increase the overall popularity of the project. 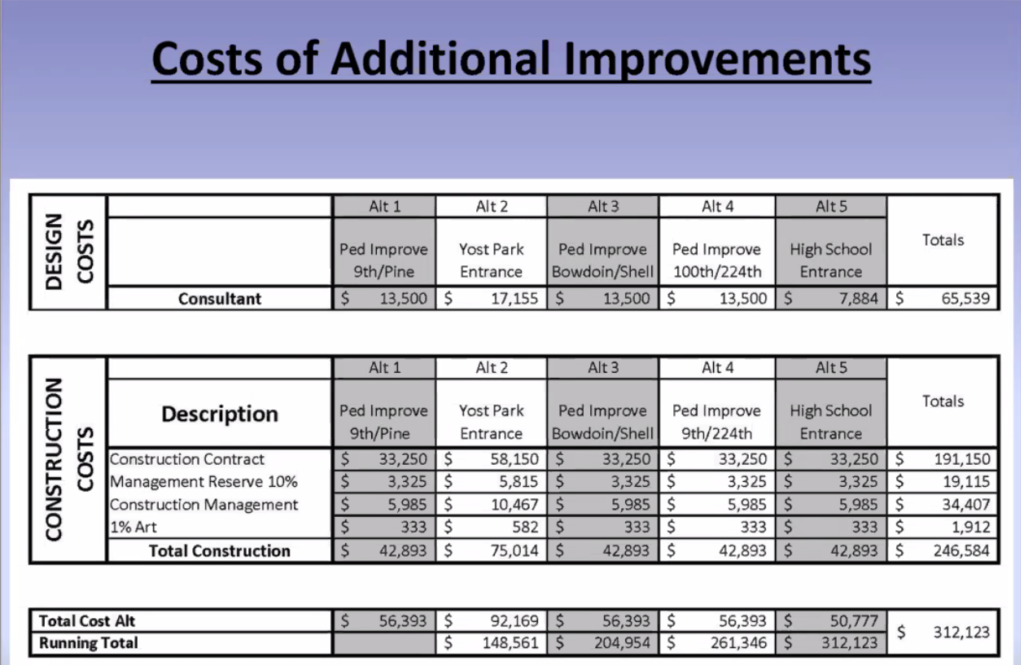 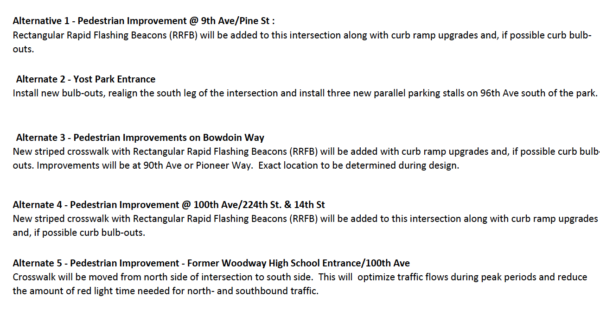 The cost of all five recommended pedestrian safety improvements would be $312,123.

Committee members agreed that the options for bicycle lanes and safety improvements should be presented to the full council for further consideration, along with their associated costs. One more community meeting is planned prior to the completion of project design, and construction is projected to start in spring 2022.

In addition, staff will be asking the full council to consider a supplemental agreement to cover $29,000 in additional work that consultant Blue Line has performed outside of its original scope.

In other committee business, councilmembers heard more details about the property that Edmonds resident Shirley Johnson — who died in January — bequeathed to the city “specifically for the purposes of being used as a park and/or community garden site and/or to cultivate and grow plants, fruits, vegetables and other related things all for the City of Edmonds and for the citizens of Edmonds and the local community as the City of Edmonds deems best in their discretion.”

That presentation will also be made to the full city council, and Parks, Recreation and Cultural Services Director Angie Feser noted that the city will launch a public planning process after the council approves an ordinance to formally accept the property, located on Bowdoin Way.