When Mayor Mike Nelson ordered an audit of the Edmonds Police Department in January, he said it would “do a deep dive into the police department’s service calls and responses, as well as look at all facets of policing and how they impact the community.”

A week ago, the mayor released the results, saying the audit “was one step to identify where we are already successful and what areas could be improved.” With new Police Chief Michelle Bennett on board, Nelson added that “we are well positioned to move forward with the recommendations.”

But there is much more in the audit that what the city shared in its news release. We have contacted Mayor Nelson’s office to ask follow-up questions. The mayor has not responded. His only public comments are in that Sept. 27 news release, which we published here.

Chief Michelle Bennett also has not responded to our request, though she has posted extensive comments on 60 of the recommendations the audit made. Overall, Bennett wrote, “There were some great suggestions posed in the audit, of which the majority we will work hard to complete. In the last six months, our department has already made great strides towards meeting many of the important recommendations.”

Ross Sutton, president of the Edmonds Police Officer’s Association, told us that “there’s certainly room for consideration of all those things, of changing the way we police.”

To add additional context to the audit, My Edmonds News has done its own deep dive into the 176-page document that recommends some significant changes to the city’s police department. 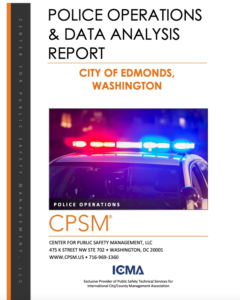 What the auditors did — and did not — do

To understand what CPSM did in Edmonds, it’s important to know what the consultant did not do. The audit is not, and was not designed to be, an examination of social issues such as bias, equity, race, politics, social worker outreach, social justice – all of which have dominated the discussion of policing in Edmonds for the past 18 months. CPSM said its audit focused on identifying appropriate staffing, community demographics, crime levels and the effectiveness and efficiency of the department’s structure and processes.

(You can read the complete audit report here.)

In the audit’s opening remarks, CPSM said that after a detailed assessment “it is our conclusion that the department, overall, provides quality law enforcement services.” It cited the police force for its professionalism and dedication to its mission, commenting that, “There is a strong sense of caring for their fellow employees and a caring for the community that is rarely seen in many police departments.”

With those notes of the strengths came the acknowledgment that Edmonds police also face serious challenges — among them what the audit called limitations from several decades of “lack of progressiveness and a lack of personnel”. The problem, added the auditors, was compounded by the retirement and departures of the three top officers and the institutional knowledge that went with them, all within in a turbulent 18 months.

The auditors made clear that for a year and a half, “there had been tension between the Mayor, the prior Interim Chief, and the prior Assistant Chief because of a lack of communication.” At that time, Michelle Bennett had been hired as interim chief and the auditors acknowledged that the communications lines between police and mayor were “now open” again.

In his news release on the audit, Mayor Nelson put it this way:

In virtually all police studies conducted by Center for Public Safety Management (CPSM), lack of communication is cited as a major organizational impediment. CPSM recommends the new police chief work on improving the department’s communication both up and down in the department.

But what is not in the news release is that the auditors also felt that improving communication was not just something for the chief: “It is recommended that the Mayor’s office and the police department continue their efforts of improving this communication.”

On the issue of “internal” police communications, Bennett — in her extensive written remarks — has said the department is implementing a process to make sure that all officers and civilian employees “feel valued and considered.”

Edmonds prides itself as the town on the Sound that offers everything residents could want in a small community. The audit says:

“The department has the hallmark of a small-town approach to policing, in which people are not just anonymous citizens but valued individuals of the community. Service is personalized, the police are part of the fabric of the community, and expectations for police service are high.”

So, the auditors lay out choices Edmonds may face: “a) continue to police the community as they do now, or b) take steps to restructure how to respond to demand, still promote order and safety, but free up additional time for officers to engage in proactive patrol and community engagement.”

That, the auditors write, is a political decision. It would mean changing how police handle a great many calls from residents.

Neither Mayor Nelson nor Chief Bennett have made any public comments on this set of recommendations and have not responded to our questions about them.

Sutton adds: “The question is what the community will want to happen. Edmonds prefers having that personal, professional relationship with officers; the in-person contact is important to a large segment of the community, so the community should have a say in that.”

Currently, 25% of all calls Edmonds officers respond to are home/business alarms, traffic accidents or for assistance to medics, firefighters and the public. The audit suggests the city change the way these incidents are handled:

The audit suggests that just making those changes could give officers more time to engage in the community and better understand residents’ needs:

“They could work on building trust  and focusing their efforts on improving traffic safety. There are numerous things that the officers could be doing and make a positive contribution to the Edmonds community instead of responding where there is no real need for a police presence.”

On these issues as well, the mayor and the police chief have not made any public comments about the recommendations for changing how police respond.

Part of the problem, Sutton told us, is that “there are no other resources in place to do what historically, it has been put on the police to do”; adding that the mayor, chief and other administrators “will have to find the balance while they decide if the city wants to do that.”

Staffing is a critical need. The auditors concluded that the mayor “appears committed” to making sure the department is properly funded, staffed, and equipped. But, right now, there are eight vacant positions out of a total of 58 sworn officers. That, the report says, has led to shuffling shifts and departmental instability — “a very unsound approach to management.” The audit says individual responsibilities and career paths are not clear. The recommendation: Address the issue immediately to bring stability.

The audit points out that the city may need to create new positions and realign or reclassify others. One recommendation is to develop a criminal intelligence officer assigned to the police department’s street crimes unit to help focus enforcement and, as well, add a crime analyst position. They suggest that a civilian manage the administrative services unit, not a sergeant.

The audit calls the department’s management rank structure “dysfunctional” with no mid-level commanders. Currently, officers are promoted to corporal, then to sergeant, and then the next rank is assistant chief. Auditors recommend creating two lieutenant positions, possibly one to command each shift. Chief Bennett has said she will propose lieutenant positions as a part of the budget for next year.

Sutton, the officers’ union president, told us that “the association recognizes there is certainly an opportunitiy for restructuring the department; to redefine how to do the work so not all of your resources are trying to do five jobs at once”

An additional recommendation at the top of the mayor’s list is this:

The department should continue to enhance recruiting efforts including a “robust” online presence, ensure that salaries remain comparable to neighboring communities, and a strategic focus to hire female officers “who are underrepresented in the department.

Both the mayor and chief have praised the work of the auditors. The CPSM report makes 95 recommendations; but it cautions that, “The number of recommendations should in no way be interpreted as an indictment of what we consider to be a fine department.” Instead, the report says its work is intended to be the basis of a “long-term improvement plan for the city and department,” which the auditors say could take a year or two, or longer.

One line in the report speaks to “creating an environment in which constructive change can thrive.” That may be what’s ultimately at stake for Edmonds. Is the city — and are the residents — willing to embrace a direction that could change the perspective of how this “small town” should be policed? Will recommended changes keep the community safe? Is there the public and political will to make decisions “in which constructive change can thrive”?