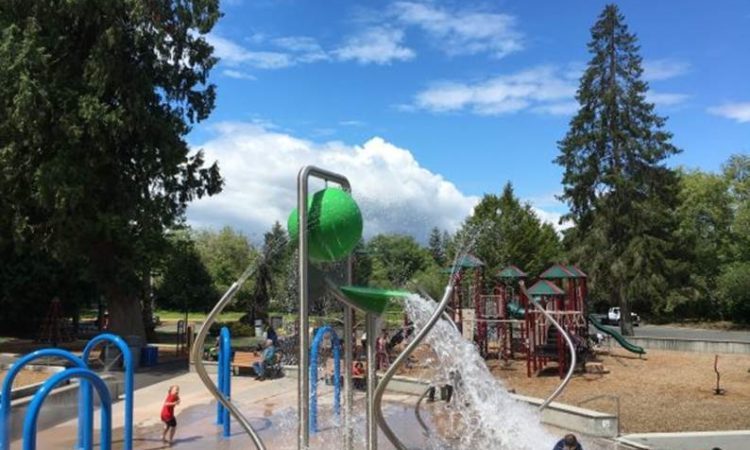 Earlier this week, the Associated Press reported on lapses in water-quality testing at several Arlington, Texas parks following the death of a child who had been infected with a rare brain-eating amoeba found at a splash pad he had visited. Citing that story, a reader wondered about the safety of the spray pad operated by the City of Edmonds at City Park.

Edmonds Parks, Recreation and Cultural Services Director Angie Feser said that when it comes to operating the spray pad, the city follows all Snohomish Health District Pool & Spa regulations, including routine inspections and those for the city’s annual permit. (Learn more about that here.)

“The city is fortunate to have Tony Bond, a nationally certified aquatic facility operator with more than 15 plus years of experience, on our staff, who manages the spray pad and Yost pool,” Feser said. Since the spray pad opened in April 2016, there has never been a health district inspection failure, she added.

The spray pad is closed for the season and typically is open and operational Memorial Day through Labor Day (weather permitting). Prior to start up each year, Feser said, all systems, including the two high-rate sand filters in use, are cleaned and sanitized. The storage tank that feeds the pad is also emptied and cleaned. At this time, the spray pad is pressure washed as well as the gutters. The front screen debris filter and circulation pump are cleaned prior to opening and also periodically through the season.

For sanitization, the city uses both calcium hypochlorite (stabilized chlorine) and an ultraviolet (UV) system, which is serviced every couple of years, Feser explained. The spray pad is inspected, cleaned and tested every morning prior to daily start (including holidays and weekends). It is also checked daily in the afternoon (including holidays and weekends). “The system automatically purges the water daily on a set schedule for about 15 minutes prior to operation,” she said.

Chemical testing for pH and chlorine occur daily at a minimum, and weekly testing is done for alkalinity, calcium hardness and cyanuric acid. There is also monthly testing for total dissolved solids.

The spray pad receives unscheduled, drop-in inspections by the health district at least twice during the season and all inspection information is posted for public viewing, she added.

The city follows both the state and county health standards for pools and spas as there are no detailed regulations currently for spray pads, she said. “When the spray pad has lighter usage, the city follows pool guidelines, but when hotter weather or more users (20-plus at a time) occur, the city implements spa guidelines, which are more strict,” she said. When this occurs, the city typically empties the 5,000 gallon tank almost daily in addition to backwashing the spray pad’s two filters at least daily.

In addition, in City Park, there are restrooms with hot water just yards from the spray pad for personal hygiene including baby change stations, Feser said. Numerous trash cans are also nearby for refuse and litter and trash is removed daily at a minimum. Signage and rules are posted for user safety. The city also does not allow dogs on the spray pad nor in the adjacent playground areas.