Jimmy Buffett sang it best in his song Coastal Confessions, which goes like this:

“I believe that down on the beach

Where the seagulls preach-

Is where the Chinese buried the truth- 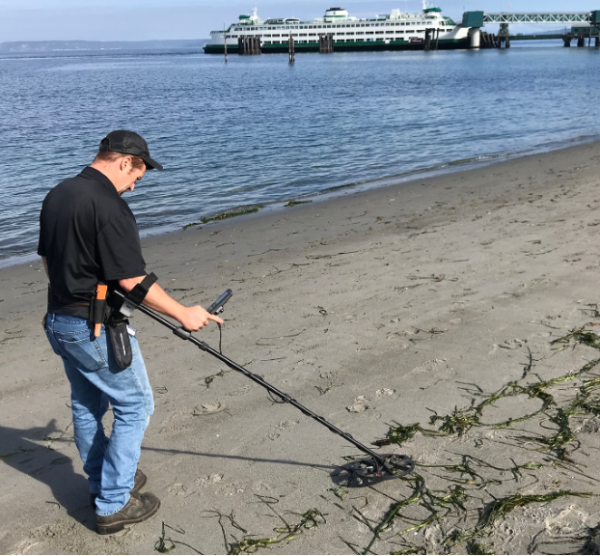 Jimmy might as well have been singing about Bob Bitner — a beachcomber, digger in the sand and treasure hunter. I ran into Bob recently as he hit Olympic Beach with an armful of electronics and a heck of a story to tell. 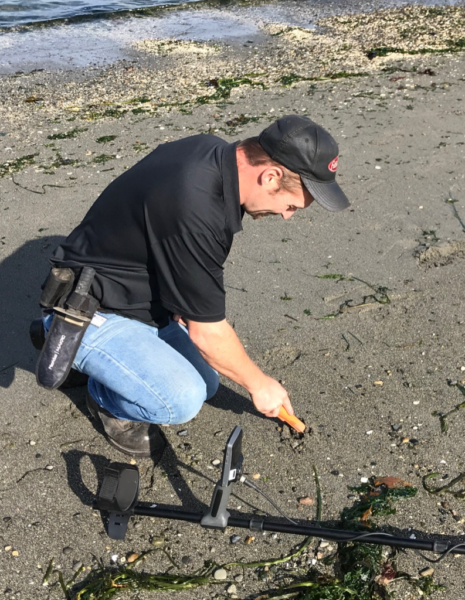 Bob uses his lunch hours to scan – and “dig in the sand” – searching and hoping. Might as well tell you right off that Bob and one of his sons dug up a 140-year-old Spanish coin buried under the wooden pilings at the Edmonds ferry dock. More on that in a moment – yes – it’s a tease – and it’s all true.

The treasure bug bit Bob a number of years ago. The family had moved into an old railroad house up in Darrington. From time to time, they would find things as they tore up old floorboards to remodel; a couple of old French and Italian coins and old square nails. That got him wondering what might be in the dirt outside. 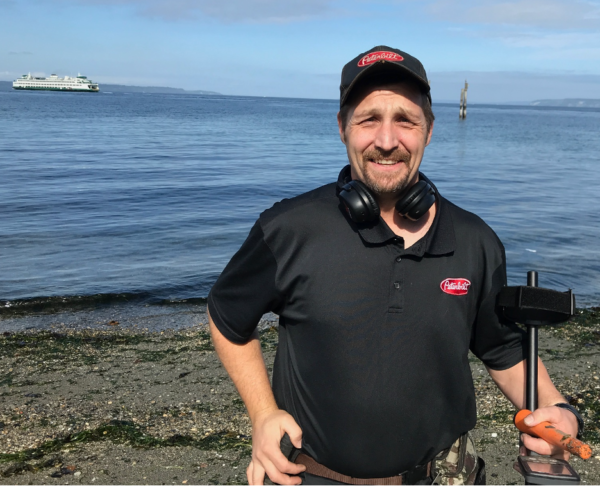 So,  Bob bought his first metal detector. “You know it’s something I always wanted to do as a kid; you know, you watch Indiana Jones; you wanna be that guy that finds the temple of doom and saves the day”. Sorry – no Indiana Jones, but his first big find at the old house was this:

Bob unearthed this Civil War Union Naval officer’s brass belt buckle; buried under 6 inches of dirt. He has no idea how it wound up in Darrington.

The past few years, on his expeditions up and down the Sound, Bob has found a couple of silver and gold rings, an opal ring, coins, can and bottle tops, old square nails – lots of nails – and even more trash – which he bags and carts away. Now – about that Spanish coin – the prize of his collection.

Bob and his son were running the metal detector over the sand under the old wooden Edmonds ferry pilings. They had already dug up a handful of Kennedy 50-cent pieces, when they got another hit; “it rang real hard on the finder,” Bob told me. When they uncovered it, the coin was so green from oxidation, Bob knew it wasn’t a half dollar. He said it took them a half hour to find it online — a Spanish coin, minted during the reign of King Alfonso XII – 1874-1886.

On one side, “you can still see the shield and the wheat,” said Bob, and on the other side “his neck and nose; it’s just hard to believe that something from 1877 or ’79 could be sitting here at the old pilings in Edmonds.”

When he searched its value, Bob found “It’s not worth anything,” but added “that’s not the whole point of this. I don’t really care how much it was worth, a million or nothing.” The point, for Bob Bitner, is that this beachcomber, dreamer, treasure hunter, has discovered the joy of digging up history and bringing a little of it back to life. If you want to hear some great stories, you can often find him, on his lunch hour, searching for what’s right under our feet. 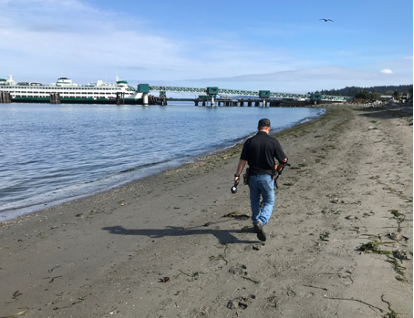