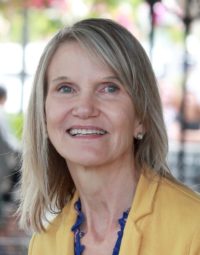 In past columns, I have lamented the financial impact that Facebook has wrought on the local news ecosystem. But what about the social and civic impacts?

On Monday, Facebook and Instagram went down for more than six hours. That outage gave me pause for a few reasons, but there’s one in particular that I want to share with readers — the increasing practice of local governments, from cities to school districts, relying on Facebook to publicize their events.

Here’s one immediate example: Today, Oct. 5, I learned from a reader that Edmonds Mayor Mike Nelson presented his budget address via Zoom at 4 p.m. Oct. 4. (In the past, these addresses have been delivered as part of a city council meeting so had built-in public access.) I did not recceive a news release in advance alerting me to this event, so I could 1) tell our readers and 2) watch the event live and present a report of the mayor’s proposal. (The Zoom recording of the mayor’s address has now been uploaded to the city’s website, and you can watch it here.)

I know that the City of Edmonds (along with other government entities, including the Edmonds School District) in recent years has increasingly relied on reaching the public by posting events to Facebook. In fact, when I checked the City of Edmonds Facebook page this morning, I found that publicity about the mayor’s address had been posted there at 9:18 a.m. Friday, Oct. 1: 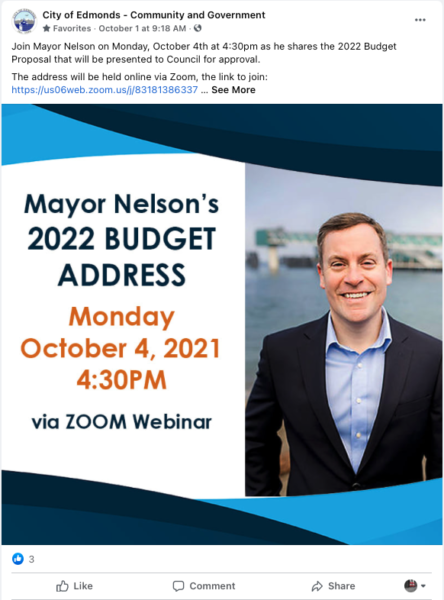 How much engagement did that get? I have no idea, other than the three “likes” it received.

I did ask the city’s public information officer how the event was publicized and she confirmed Tuesday that the event was announced on Facebook. “And with Facebook down all day yesterday, we weren’t able to do subsequent announcements or ask local media to post on their Facebook pages.”

So what happens when you don’t control the platform and Facebook goes down? Is it OK for city government to rely on one method for publicizing an event as important as the mayor’s proposed city budget?

I will admit, I spend as little time on Facebook as possible, so it’s easy for me to “miss” a government posting. But what about those residents who don’t have access to Facebook, either by choice or by circumstance (no internet acess, working to take care of their families or experiencing language barriers, to name a few)? How is that practice transparent or equitable?

And now, we are also learning, from a Facebook whistleblower (see details in this AP story), about the ways that Facebook and Instagram “harm children and fuel polarization in the U.S. while its executives refuse to make changes because they elevate profits over safety.”

I have openly admitted that I have a love-hate relationship with Facebook. For me, it has been a “necessary evil” that has helped drive traffic to our website, although it’s been impossible to keep up with the constantly changing algorithms that determine what our Facebook page followers see. (Those algorithms were also cited by the whistleblower in her testimony, noting that a 2018 change to Facebook’s content flow “contributed to more divisiveness and ill will in a network ostensibly created to bring people closer together,” the AP story said.)

Will this latest bad publicity force Facebook to change its ways? The company has been taken to task before, with no apparent shift in behavior, so who knows? But there’s one thing I do know: It’s not transparent or good practice for public agencies to only publicize their events on Facebook.

I want to add one more important thought: The role of daylighting these types of issues is what local journalism is all about — and it does cost money to do that. We have writers, photographers, designers and technical support people that we pay every month to bring you the news. Unlike Facebook, we don’t generate billions of dollars in advertising revenue but we do have many loyal advertisers who support us — so please support them. And a reminder that in addition to advertising, we rely on our readers to support our work through their regular donations of any amount. You can support us here.