Mountlake Terrace resident Amanda Johnson had her debut novel East of Manhattan published recently. The novel was partially informed by her personal experiences while husband Ben Hill worked as the house manager for a celebrity in New York. It touches on themes of feminism and shifting gender roles as related to work and family structure.

East of Manhattan tells the story of Julie and Scott Cutter, who make a deal that Scott will spend two years working as a butler for a rich reality television star and then they will start the family Julie has always dreamed of. But Julie learns she’s approaching prenatal geriatric status, and the job requires that her husband lives in the basement of his celebrity boss’s Manhattan mansion instead of with her across the East River in Queens.

Then one morning, Scott casually announces over brunch that he doesn’t want kids anymore. Julie is convinced that spending an idyllic Fourth of July weekend in the Hamptons will change his mind. She makes one last-ditch effort to salvage her dream, only to be confronted instead by her worst nightmare and a dirty little secret that will change the course of her life forever.

“The plot and the characters and a lot of the actions that they take are fictional, but the inspiration that I got behind some of the actual things that happened to us when my husband had this job were real life,” Johnson said. “I kept a journal and when crazy things that happened – that I didn’t think would happen like normal everyday life but were now our new normal — I would record that.”

Johnson then referenced her journal when writing the novel. “I would be like, oh, that’s right, he did have to leave me in the middle of dinner to go make a turkey sandwich for his boss that one time and just these weird crazy things that happened,” she said.

She had initially journaled about living in New York as an actor, but after Hill started working for the celebrity, “it was more like recording those experiences and also how I felt at the time,” she said. “It was just a really cathartic way for me to address those emotions I was having.”

Johnson explained that Hill’s job required him to oversee the daily operations at his celebrity employer’s mansion and fill kind of an “everyman role,” which would often even include performing driving duties for his employer on the weekends.

A particularly memorable experience happened when the couple were out to dinner and Hill got a text from his employer’s full-time driver saying, ‘We’re on our way home and he wants a turkey sandwich,’” Johnson said. “So my husband knew that that meant he had to have it ready as soon as he walked in the door,” and “in that moment, that took priority. He left me there to finish my chicken (dinner) on my own and it was an interesting situation.”

The situation “definitely wasn’t an outlier,” she added. “Things like that happened a lot and that became the norm and we kind of had to adjust for that.” Another instance saw Hill receive a text that he would have to go resolve a situation with the house’s fire alarm before the couple could leave on their planned vacation that morning.

Hill’s job required him to spend five nights each week at his employer’s residence. He had two days off when he could spend time with Johnson and sleep at their home, but “he would go back to the mansion in the middle of the day on his second day off,” she noted, “so it often felt like it wasn’t a full two days.”

One of the ways the couple adapted around Hill’s employer’s schedule was to grab a quick bite to eat. Johnson said often after work she would go meet him at places where “we would have ‘five-minute dinners’ and he would go back to his job and I would go home on the train.” 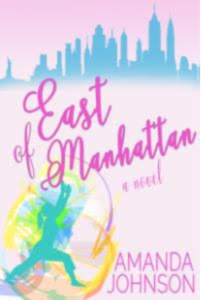 Johnson said that when writing East of Manhattan, she wanted to include “the loneliness that brought for me. He had to live in this house, so every night I was on my own.”

In the book, when Scott tells Julie that he no longer wants to have kids, “Julie’s addressing issues and coming to terms with her long-held belief and has to kind of shatter that belief she’s been living in and take ownership of her life and make some really big decisions that may or may not include her husband,” Johnson said. “And she has to really kind of figure that out for herself and establish herself as a powerful confident woman who’s capable of being on her own and making her dreams come true on her own terms if that’s what she decides to do.”

She added, “Mistakes are made on both sides and decisions have to be made that come out of those mistakes.” Julie has to reassess her situation and consider, “What if my life doesn’t turn out the way I thought it always would,” Johnson said.

In addition to acting, Johnson had previously written screenplays and stage plays but “when this idea came to me it came to me as a book,” she said. “I’ve never written a book, that’s not my background or experience, but I just saw it as a book and knew I had to honor that.”

Johnson said the nearly six-year process was challenging because, “I didn’t really know how to write a novel. I had the story, I knew where I was starting and kind of where I wanted to go, but I didn’t know all of those pieces in between.” She set aside times that were dedicated to writing and described her efforts as “a lot of trial and error trying to figure things out and just pushing forward.”

Additionally, she was surprised to learn how much more work was still required after she had finished writing the story. “The revisions and trying to find a literary agent and a publisher and marketing it once it’s out – there’s just a lot of pieces that I didn’t really know were a part of novel writing,” Johnson added.

Johnson considers “East of Manhattan” to be women’s fiction, although she noted it’s also been categorized online as romance. “I have a little bit of a hard time with that because romance has very particular tropes you are required to follow in their structure to be considered a true romance book and mine doesn’t follow that necessarily,” she said.

“The novel deals with weighty topics such as fertility with humor and grace,” she noted. “It also goes beyond the realm of simple chick lit and explores themes such as female empowerment and entrepreneurialism.”

Johnson grew up in Kirkland and later lived in New York for 10 years. She and Hill moved to Mountlake Terrace nearly five years ago in order to be closer to family while raising their son Jackson.

Her efforts to find a publisher also yielded a local connection as East of Manhattan was published by Books to Go Now, which is based in Poulsbo.

“The thing that got me through the hardest parts of it – and also I was doing this through the height of the pandemic too – and what kept me going was visualizing holding the physical copy of my book,” Johnson said. “And then when that day happened, when that box of books arrived, it was just so rewarding and beyond any emotion I could describe because that’s the thing I had been dreaming of.”

She celebrated with family on the patio at Epulo Bistro in Edmonds after receiving the printed copies of her book. Her mother even had a custom cake made for the occasion that was decorated with the book cover. “It was so much fun,” Johnson said, “we had this awesome dinner and a toast and we ate cake and it was just a really fun way to celebrate.”

Johnson reported that she’s received positive feedback about her debut novel. She noted, “People who are closest to me they always want to know what’s real and what’s fiction and it’s just not always fun to tell them — I would like them to draw their own conclusions.

“I’ve also gotten a lot of feedback that it screams for a sequel – so we’ll see,” she added. “I’m still kind of recovering after writing a novel and haven’t taken that on yet.”

Even if Johnson isn’t ready to start writing a sequel she stays busy creatively an author, actor, voiceover artist, host, and producer. Her written works include the films Alice in Astoria, Babymoon, and the stage play Jennie.

She is currently working on a screenplay and proof-of-concept short film in order to develop a television series, Tapestry Brewery, about a female craft brewer in the Pacific Northwest.

Her voiceover work has mainly been for commercial and industrial projects, although Johnson noted she was recently the voice of Nordstrom Trunk Club, “which was really fun.” She also hosted the podcast South Sound Money Talks in corroboration with TAPCO Credit Union.

“I thought I wanted to record the audio book for East of Manhattan until I really looked into it,” she said, then realized “this is not my expertise. .That’s a different type of voiceover and I don’t have the training for it and to be able to make it really good would’ve just been too much.

Voiceover artist Vanessa Lopez was hired to narrate the audio book version, which Johnson anticipated will be released within the next few months. “I loved her voice, it seemed like she really understood the tone and the point of view that I was going for,” she noted of Lopez. “I really loved what she did with it.”

Johnson continues to act and she recently won the Outstanding Achievement Award (Actress) from the Los Angeles International Film Festival for her portrayal of an attorney named Kendall in the short film Jonnie Sunset. The movie is currently on the film festival circuit and she wasn’t yet sure when it will be made available to a wider audience.

In addition, she plays the lead role of a dancer who’s coming to the end of her career in Jagged Nails. That film’s trailer is also currently screening at film festivals.

Whether she’s writing or performing, Johnson said there’s “never a dull moment – I also have a 5-year-old too.”

“The past year has been intense for so many reasons beyond just the pandemic,” Johnson noted. “I want East of Manhattan to be a treat that provides women a much-needed escape.” She added, “It’s fun and it’s quick, but it’s also got a little bit of deeper heart in there.”

More information about East of Manhattan and Johnson’s writing can be viewed here. Her acting credits can be seen here.