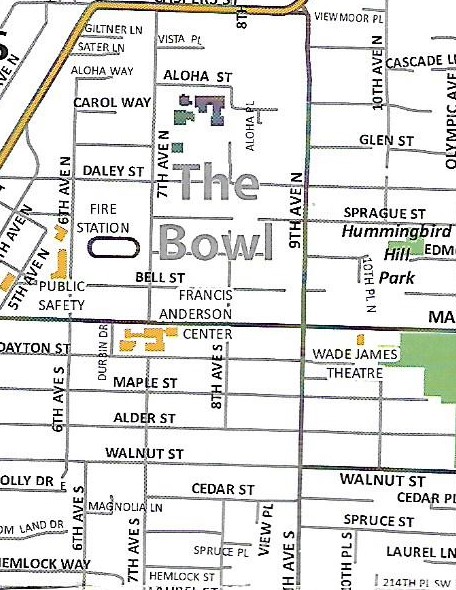 “There was an old abandoned cemetery on the hill east of Ninth Ave., in the vicinity of Walnut Street.  It was overgrown with briars, salal, and small evergreens.  The few remaining markers were so weather-beaten, they were completely illegible.”

Among the many memories she had of early Edmonds, Esther Amy Kingdon Knowles, in 1986, shared this information with the board of the Edmonds Memorial Cemetery. Her recollection of this important bit of history is especially noteworthy because it gives us additional and viable proof that the abandoned burial grounds did exist—located between Dayton and Walnut Streets, next to what was then 9th Street.

Esther Amy Kingdon was born in the year 1894 at the small village of Richmond Beach, a few miles south of Edmonds.  She was the daughter of William Kingdon II, and his wife Vadner. The Kingdon family first came to Edmonds in 1893, and after a short absence, the family returned in 1898. Until his death in 1911, Mr. Kingdon was a prominent Edmonds’ merchant—his mercantile business located on the south side of George (Main) Street between 3rd and 4th Streets.  The Edmonds Tribune advertised that William Kingdon’s store carried both groceries and dry goods.

In my May 7, 2017 column “Looking Back: The first burial grounds in Edmonds and mysterious happenings,” I wrote about the abandoned burial grounds located east of the Dayton Street school.  At that time, I referred to an article in a 1910 issue of the local newspaper which reported that during what was called a highway improvement project that year, some of the graves were disturbed when the city widened 9th Avenue South between Dayton and Maple Streets.

Recently, while working on a project to organize a group of family stories that had been submitted to the cemetery board in the latter part of the 1980s, I came across Esther Amy Knowles reference to the early burial grounds. Ms. Knowles’ memories and the other family stories are now being assembled as a collection. They contain a plethora of first-person accounts regarding the history of the Edmonds area and local pioneer families.

Esther Amy Kingdon Knowles died in 1993 at the advanced age of 99. Although most members of the Kingdon family are buried at Edmonds Memorial Cemetery, Esther Amy Knowles burial location is Floral Hills Cemetery in Lynnwood.

Esther Knowles’ younger sister, Ivy May Kingdon Specht Hoff, also contributed her own special memories of Edmonds, and her remembrances will be included in the collection. Just like her older sister, Ivy May Hoff lived to celebrate her 99th birthday. She is buried at the Edmonds Memorial Cemetery, along with their father and mother and other family members, including the family patriarch William Kingdon Sr. (1829-1898).

The collection of family stories mentioned in this article is still a work in progress. When it is completed, it will feature 26 first-person family histories and/or biographical information. These 26 stories were mainly submitted by offspring of the pioneers or close relatives. The second part of the collection—added at a later date, will have 22 family histories; mainly of some of the shakers and movers of early day Edmonds and its surrounding area.

Betty Gaeng is a former long-time resident of Lynnwood and Edmonds, coming to the area in 1933. Although now living in Anchorage, she occasionally writes about the history and the people of early-day Lynnwood, Edmonds and Mountlake Terrace. She is also an honorary member of the Edmonds Cemetery Board.

8 Replies to “Looking Back: Revisiting the abandoned Edmonds burial grounds”