Updated to clarify the number of days that Tahlequah, the orca mother, carried her dead baby.

Participants in a local Orca Recovery Day event gathered for a nature walk through Ballinger Park in Mountlake Terrace Oct. 16. Attendees learned about local native and invasive plants, how to create bird habitat, and why that kind of conservation work benefits Puget Sound and can also help the area’s Southern Resident orca populations.

Kari Quaas, community engagement project manager with the conservation district, said the annual event “started because of Tahlequah, the orca mother who carried her dead young for 17 days or so about four years ago, and we wanted to do something.” It originally started with the Pierce Conservation District and has since grown to include events held at locations along the west coast stretching from California up into British Columbia.

Many in attendance noted they were glad that it didn’t rain during the event which drew approximately 100 people from throughout the area to Ballinger Park. Participants included a mixture of children, adults, families and even a few dogs who were on leashes.

Snohomish Conservation District Executive Director Linda Lyshall said, “This is a very good turnout for the event and I think it’s because this is such a beautiful place and Mountlake Terrace is just a great partner.”

Staff from the conservation district served as tour guides during the nature walk. They pointed out areas, species and items of interest throughout the north end of Ballinger Park.

Several in attendance said that the large red mushrooms featuring white spots and also some owl vomit located underneath a tree were particularly memorable.

Elsie Waters, 7, said seeing those mushrooms was her favorite part of the event because, “I never believed they could grow so big!”

Kyla Denney-Devries, 7, who was wearing a plush orca hat, said she was able to find most of the items listed for the scavenger hunt. She enjoyed seeing the ducks and agreed with Waters that the giant red mushrooms were her favorite as well.

Both Waters and Denney-Devries had also recently learned about orca whales during a focused lesson unit in school and said it was helpful to see local actions and real-world applications that tied into that knowledge.

Elsie Waters said seeing those mushrooms was her favorite part of the event because, “I never believed they could grow so big!”

The conservation district provided literature about native species and their importance. A printout of various actions that can be taken at home to help orca populations included planting and caring for native trees, installing a rain garden to capture and filter pollution, using non-toxic yard products and household cleaners, properly disposing of litter and pet waste, safely disposing of medicines rather than dumping them down a drain, washing vehicles at a car wash, along with fixing vehicle leaks and regularly making sure their tires are properly aligned, rotated and inflated.

“It’s nice when people can be aware of their surroundings and see what are native plants and invasive plants, and what species share this land with us,” Quaas said. “Everything we do on land affects the water – it all drains towards a body of water – and that’s where our orca are. Typically inland you have the streams and creeks that support Chinook salmon, which is an orca whale’s favorite food.”

Saturday’s event served to help educate people about local ecosystems, wildlife, water and how they are all interconnected with the health of orca whales and their populations.

“Without that support on land they don’t survive,” Quaas added. “And as we have grown, the human species, we’ve taken over a lot of native trees and native areas/natural lands and in order to get them back there need to be restoration projects.”

An upcoming restoration project is planned at Ballinger Park to create new native plant and animal habitats. It is a joint project between the City of Mountlake Terrace and the U.S. Army Corps of Engineers anticipated to cost $5.4 million. The city has been awarded grants from Washington state and its estimated cost-share for the project is approximately $875,000 that will be funded from the city’s stormwater budget.

Plans call for Hall Creek, which passes through the park, to run along a more naturally curved channel before it drains into Lake Ballinger. Removing invasive plant species and additional wetland area enhancements are planned throughout Ballinger Park along with improved walking trails and a boardwalk section. Construction is scheduled to begin in 2023.

Lyshall noted the “project they’re planning to do here is really cool. The stream restoration is an important step for our habitat restoration and salmon restoration.” 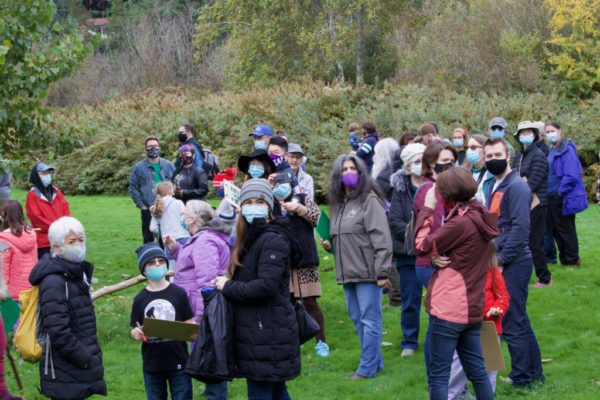 Everett residents Kathleen Bradley and David Sanchez Cuesta were happy to take home a couple of native plants. Bradley said she regularly attends the conservation district’s annual plant sale so she can get native species to grow and then give them away to people. “I love native plants and I wish we could get more of these green spaces and everything they’re doing here (at Ballinger Park) is so beautiful,” she added.

The first 60 households that registered ahead of Saturday’s event were able to reserve a native plant to take home and households with children in grades 3-4 could reserve an at-home salmon lesson kit.

Susan Kuhn, who has lived across from Ballinger Park for 25 years, picked out a salal plant to take home, where she anticipated it will be planted near a Douglas Fir tree. Kuhn said she found Saturday’s event to be very informative. “I learned a lot about the birds and the native plants and how critical that is,” she said. “I learned about our owls, which I didn’t know lived here, and about more of our trees, our vegetation here.”

“I loved the fact that they’re interested in establishing more native plant-life here and protecting the environment,” she added. “That it’s more than just a playground coming to us, but that there’s true protection of our natural environment and I love that.”

Mountlake Terrace resident Faith Gray, who also lives across from the park, said she was intrigued learning more about its trees and how they can communicate with one another using a network that includes soil fungi. “That’s just amazing,” she said.

Mountlake Terrace Stormwater Program Manager Laura Reed said she was pleased with the turnout. “It was really exciting to see people’s enthusiasm for the park and for practices to help protect orcas and to learn about native plants. It definitely exceeded my expectations,” she said, adding the event was “was a smashing success as far as I’m concerned.”

Lyshall said many people may not know the Snohomish Conservation District provides a variety of free technical services and resources to Snohomish County residents including by phone or in-person. “We’re just here to help with natural resource conservation that’s our thing.”

Conservation district staff also encouraged parents and teachers to contact the agency about its free educational programs that can provide lessons for at home or in classrooms.

More information about the Snohomish Conservation District, including its programs, services and educational resources, can be viewed here. 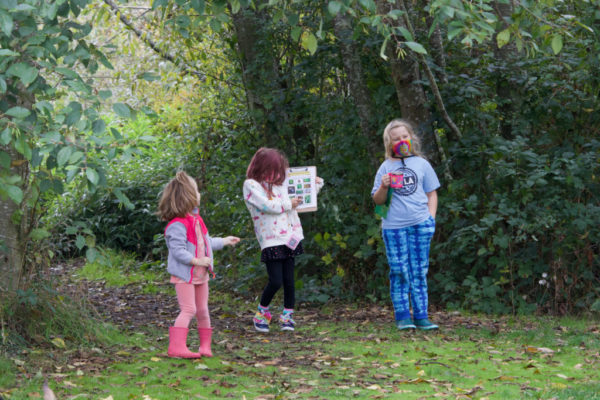