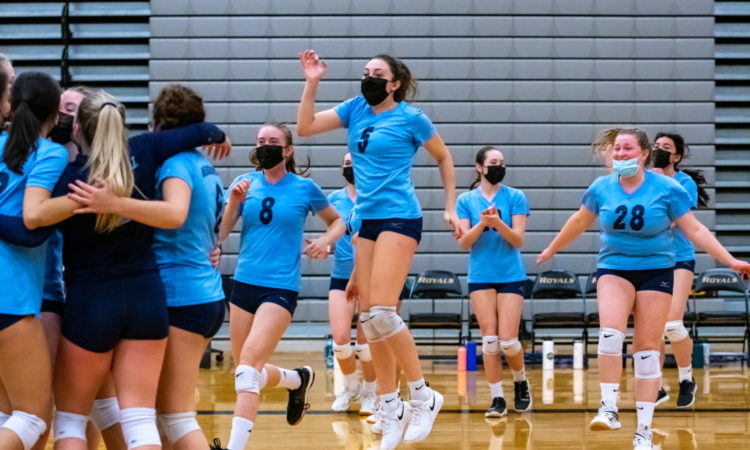 After the first two sets of play Thursday night at Lynnwood High School, it looked as though the host Royals volleyball team was going to make short work of the visiting Mavericks from Meadowdale High. But the Mavs had other ideas, rebounding to win the final three sets for the win.

The first set was fairly competitive before the Royals made a late run to win it 25-18. They went on to dominate the second set 25-12.

Meadowdale appeared to be overmatched and on the ropes.

“I knew that we weren’t playing the best we could,” Meadowdale head coach Megan Rainey replied when asked what was said in the team huddle between the second and third sets.

“We talked about being there for each other, supporting each other, making sure we had each other’s backs.” Rainey continued.

It seemed to work, as the Mavs came out and played a much better brand of volleyball, reducing errors and executing their offense on the way to a solid 25-19 win.

The fourth set was a marathon back-and-forth affair, with several lead changes. But Meadowdale hung on to win, 28-26, forcing a fifth and deciding set.

The Mavericks raced out to a 5-1 lead in the fifth, forcing Lynnwood to take a timeout to regroup. They would do just that behind the serving of Cassidy Johnsen to pull the Royals back even at 5.

However, that would be as close as Lynnwood would get, as Meadowdale finished off the set and match with a 15-10 win.

The match was highlighted by a battle of impressive middle hitters — Lynnwood sophomore Hannah Johnson and Meadowdale junior Tanna Kollen.  Johnson had 14 kills and 6 blocks to lead the Royals, while Kollen had 16 kills and 5 blocks to pace the Mavs.

Sarah McArthur had a great overall match for Lynnwood, with 12 kills, 4 aces, and 12 digs. Setter Charlie Thomas added 31 assists and 4 kills of her own.

Steph Grimes led Meadowdale with 20 digs, while Eden Thoesen had 35 assists. Meadowdale sophomore Sofia Brockmeyer came off the bench and provided the Mavs with excellent serving and inspired defense, crucial to their comeback. She finished with 5 aces and 9 digs.

“She (Brockmeyer) was all out on the floor. Her serve receive was awesome. Really a fire that we needed starting that third set.” Coach Rainey added.

— Story and photos by Scott Williams