Although Edmonds City Council positions are ostensibly non-partisan, there are candidates who are heavily involved in party politics. In this upcoming election for Edmonds’ City Council, Position 3, I urge those of you who had intended to vote for Adrienne Fraley-Monillas as that candidate from the party “I always support” to pause and consider how divisive and uncivil Councilmember Fraley Monillas has been over the past several years. What Edmonds needs now is someone who can unite people and who will bring civility and democratic process back to our City Council.  Based on her behavior towards Edmonds’ citizens and council colleagues, that is undeniably not Adrienne Fraley-Monillas.

There is a continuing role for Adrienne to play as a private citizen as an enthusiastic advocate for the 99 Corridor, Lake Ballinger and other neighborhoods coming in to their own in Edmonds.  However, if we want a return in Edmonds to government that is respectful of and responsive to its citizens and where Councilmembers are civil to each other, we must replace her on city council.

There is much to say about Councilmember Fraley-Monillas’ disrespectful and unprofessional behavior over the past several years. I will speak to a small portion of it here.

Lack of civility to council colleagues

In that same council meeting, according to the approved minutes, Councilmember Dave Teitzel referenced a guest view article authored by then-Council President Fraley-Monillas, which appeared in the Edmonds Beacon. In it she attempted to inappropriately undermine a majority vote after the fact. Councilmember Teitzel stated that “the article is full of innuendo, misinformation and falsehoods designed, apparently, to influence public opinion against Council. The article is very disappointing and unbecoming of a Council President.”He summed up his comments by saying, “Going forward, it is my hope the new Council President is much more circumspect in written and verbal comments, bases arguments on facts and data, and refrains from using falsehoods and innuendo in attempting to sway public opinion.”

Councilmember Fraley-Monillas frequently invokes race to garner attention, a mindset that only serves to divide people and sensationalize her speech. In a Facebook post, she referred to some Edmonds residents who signed a petition asking Mayor Mike Nelson to resign as “that pack of downtown rich white people.” She tried to defend her statement by saying it was made on a private website: “It’s a private Edmonds Website, ‘Indivisible Edmonds’; a very private site.” (My Edmonds News, Jan. 6, 2021) The fact that she makes such discriminatory and offensive comments about Edmonds’ citizens on “a very private site” almost makes it worse. How many other awful comments are out there on other such “very private sites.” As a sitting councilmember she has an obligation to refrain from such disparaging comments about the city she represents regardless of how private the platform is. Make no mistake, this is what Councilmember Fraley-Monillas thinks of people who have political opinions different from her own. Rather than having the skill to argue for her ideas and policies, she resorts to name-calling.

She has also been called out for referring in local media to “all the racism in Edmonds.” These kinds of unfounded and unconstructive statements serve only to get her attention and do harm to Edmonds.  This is neither good legislating skill nor is it respectful to her constituents.

The botched and biased confirmation process for Edmonds’ police chief shows Councilmember Fraley-Monillas bullying her way through a process that should have been deliberate and careful. From the My Edmonds News expose on the police chief selection debacle, (“City learned about Pruitt’s history two weeks before mayor’s nomination” Posted: Jan. 15, 2021) we learned that, in attempting to at least slow down the process so more due diligence could be done when red flags surfaced about the mayor’s pick, Councilmember Vivian Olsen took three key actions, well within the scope of her duties as a councilmember, according to City Attorney Jeff Taraday:

Dec. 3: Councilmember Vivian Olson calls the HR Director with questions about domestic violence issues she had become aware of in Pruitt’s past.

Dec. 4: Olson orders her own copy of the documents.

Dec. 6: Olson receives documents; emails copies to the HR Director, the mayor and all council members.

Dec. 8:  Councilmember Fraley-Monillas supplies the determinative vote to not go into Executive Session where the issues about Mr. Pruitt’s background could be discussed.

We know then that Councilmember Fraley-Monillas and others had important information about Mr. Pruitt that required at a minimum further investigation before council voted to affirm him as Edmonds’ Police Chief. Nonetheless, former Council President, Fraley-Monillas proposes expediting the affirmation process by a week and votes against going into Executive Session at which time a confidential discussion of the issues around Mr. Pruitt would have likely resulted in a postponement of the vote until the issues could be properly investigated.

And from the Approved Minutes of the Dec. 8 City Council Meeting we learn that Councilmember Olson was disparaged for her due diligence. She stated she “felt she was being pressured and told she was being unkind in her assertions that things were left out of the background check, but she believed that was the case. Despite repeated denials that things came up in the background check, she knew there were holes in it. In the end, it was all about public safety.” It is clear from the chain of events in the police chief selection process that Councilmember Fraley-Monillas not only advocated rushing the process when she had reason to believe there were issues with Mr. Pruitt, but she disparaged Councilmember Olson’s ethics when she accused her of racially motivated research about Mr. Pruitt.

Then there was the “drinking incident.” (See recording of Aug. 24, 2021 council meeting).  It showed very poor judgment on Councilmember Fraley-Monillas’ part to attend a council meeting while under the influence of both alcohol and pain killers.  The point here is not that she simply “had a glass of wine with dinner” or that she had to take pain killers for a dental issue, but that she was clearly impaired at a meeting during which legislative decisions are made and votes are taken. Then, in an astonishing attempt to rebut remarks in a letter written to My Edmonds News about the incident (My Edmonds News Sept. 14, 2021), she tried to change the subject by making unfounded accusations about council meeting attendees’ “wild behavior” and drinking. The citizens she accused of such behavior were really ordinary residents attending an open public meeting to bring up concerns about children’s safety, speeding, elimination of single-family neighborhoods, the portal to report on your neighbors installed by the mayor and other important issues. And, with the police in place at that meeting, surely if there had been public drinking it would have been reported to them and violators cited. She capped it off by comparing Edmonds’ citizens who attended that Council meeting to the Jan. 6 rioters at the Capitol. Remember, although she apologized to fellow councilmembers, she has not ever apologized to the citizens of Edmonds for being under the influence at a council meeting.

Showing utter disrepect for the citizens of Edmonds

Finally, and in my opinion, the most egregious, disrespectful, and premeditated behavior on her part is when she made a brazen disrespectful gesture on screen toward residents speaking before council.  (see screenshot insert below from the Sept. 7 council meeting at the 1:10 mark). This offensive sign is recognized as indicating that another person is a “loser.” To be clear, Councilmember Fraley-Monillas directed this offensive gesture at fellow Edmonds’ citizens speaking at a council meeting, a disrespectful gesture aimed not just at the commentors, but really at all of us. 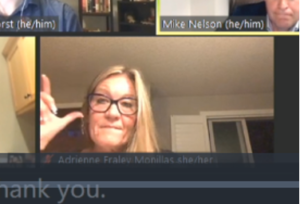 When your ballots arrive, keep this image in your mind.  We do have the power to vote her out of office.

Publisher’s note: Reader View columns are opinions submitted by readers and do not represent the opinions of My Edmonds News.