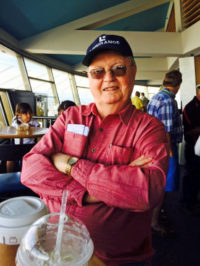 Reggie was born in Brooklyn on November 26, 1934 and graduated from Brooklyn Polytech High School. He joined the Army in 1955, became a Sergeant, and after moving around the country, was then stationed at Fort Bliss, Texas until his discharge in 1958.

He attended college while in the Army, and after an Honorable Discharge, he eventually graduated from New York University in 1963 with a Bachelor of Electrical Engineering. He later returned to school and completed a Master of Science degree at Adelphi University in 1970.

While living in NY, he worked for Grumman Aerospace, (later Northrup Grumman) for over 40 years as a Systems Engineer before retiring, and later returning as a consultant. He worked largely with the NASA program and was at the forefront of many new technologies.

At a wedding in 1958, he met Phyllis Silver, and the two were married on September 1, 1960.  They lived in Bayshore, NY, and then in 1964, they moved to a home in Smithtown, NY, where they would live until 1996. They moved to Georgia, built a home in Reynold’s Plantation, and lived there for another 13 years before they moved to Edmonds, WA in 2009.

Reggie is survived by his loving wife of 61 years, Phyllis, and daughters Allison (James Brantley) and Heather (Brian) Ogborn, and the greatest joy of his life, his granddaughter Molly.

Services will take place at 1:00 pm Friday, October 15 at Beck’s Funeral Home in Edmonds. The service will also be live streamed on Beck’s website.  Immediately following the service, a visitation will be held at Beck’s until 3:00 pm.

In lieu of flowers or meals, Tribute Gifts in his name may be made to his beloved IEEE.