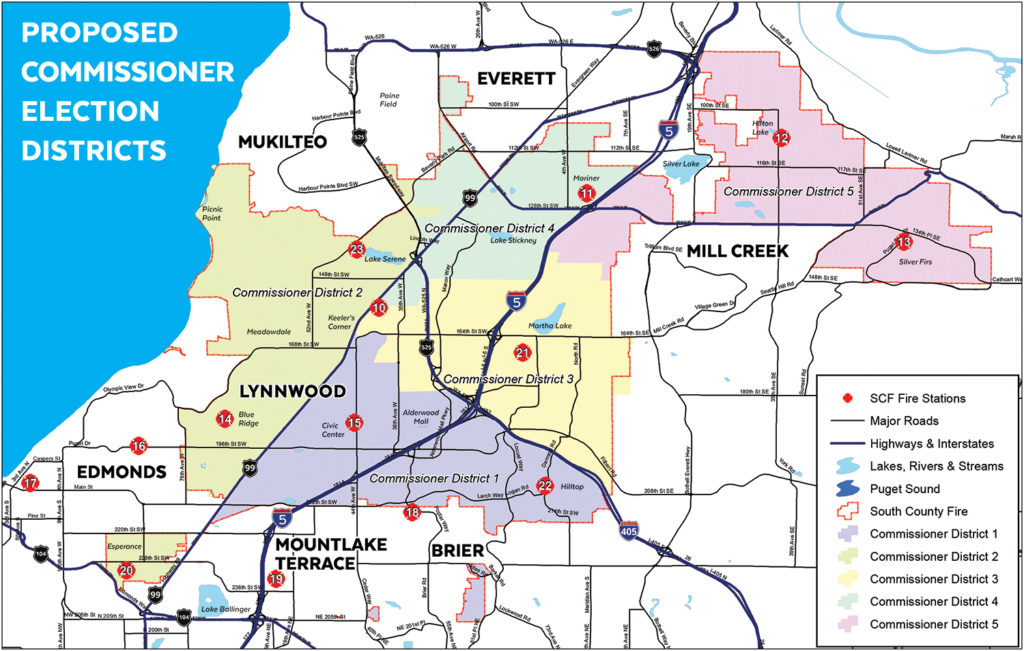 The regional fire authority (RFA) is governed by a board of seven fire commissioners: two elected at-large and five elected from commissioner districts. Law requires election districts to be updated to balance population based on the latest federal census counts.

The election districts do not include the cities of Brier, Edmonds and Mountlake Terrace. These cities contract with South County Fire to provide emergency services but are not part of the regional fire authority, which includes the city of Lynnwood and unincorporated areas.

South County Fire hired an independent consultant to draft the redistricting proposal now under consideration by the Board of Commissioners. Roads and geographical features were used as boundaries wherever possible. The RFA Plan adopted by voters in 2017 requires at least two election districts must include a portion of the City of Lynnwood. Three of the proposed districts meet this requirement.

A public hearing on the redistricting proposal will be held during the Board of Commissioners meeting on Nov. 16. The meeting begins at 7 p.m. and is being held remotely using Zoom teleconferencing (Meeting ID 861 5293 4763). Visit the South County Fire website meeting page, www.southsnofire.org/meetings, for instructions on how to provide public comments during the hearing or in advance via email or voicemail.

Maps of the proposed election districts are available for review:

Commissioner districts are for election purposes only. These districts will not change or impact 911 responses or the delivery of fire and emergency services.