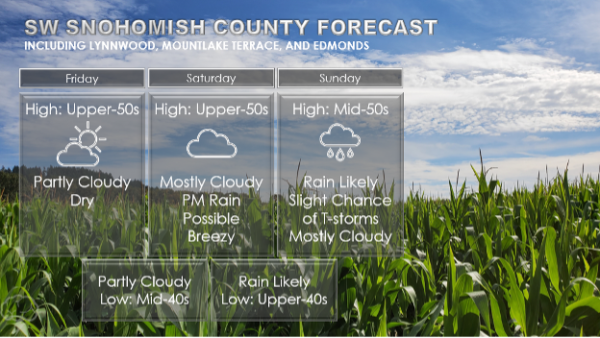 The month of October is so amazing—not just because my husband and I both have our birthdays toward the end of the month. It’s such an awesome time of the year—the leaves on trees are vibrant colors, the fall festivities are going full steam, and there’s a good mix of rain and sun to make everyone happy. There’s just something about those cooler fall days that is very cozy, regardless of rain or sun. 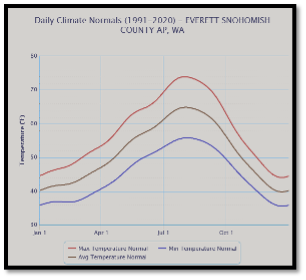 Just because it’s getting cooler overall doesn’t mean, however, that it can’t be nice! Thursday has been an example of that; it’s been sunny, albeit cooler. Friday is expected to be similar, starting out a bit cloudy, but clearing up gradually throughout the day. High temperatures are expected to be near average, in the upper 50s. Overnight temperatures will be quite cool, with lows dropping into the mid 40s—among the coolest temperatures we have seen in months.

The majority of Saturday will be a transition time, as a front approaches the region. Most of the day will be cloudy, with highs again in the upper 50s. The front arrives late Saturday into Sunday, bringing widespread rainfall in the overnight hours.

After the front passes, widespread rainfall turns to more showery weather. There is the potential for a Puget Sound Convergence Zone (PSCZ) to form on Sunday, which carries with it the chance of a thunderstorm and bouts of heavier rain. You can read more about convergence zones in a prior blog post I wrote here. If a thunderstorm develops, remember: When thunder roars, head indoors!

Looking ahead to next week, Monday night has the potential to be the coldest of the season thus far, with lows dropping all the way into the upper 30s. This is cooler than average for this time of year, but I’d start getting used to it—in a little over a month, these overnight temperatures will be par for the course.