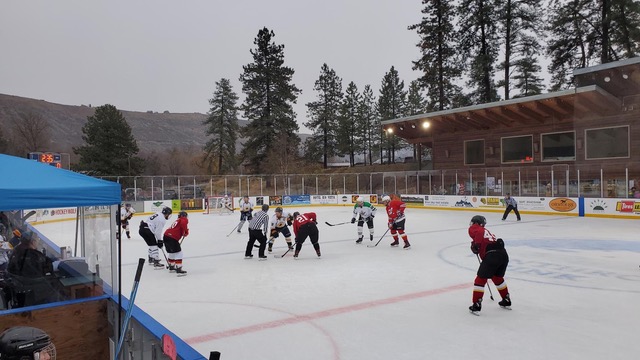 In the iconic movie Field of Dreams, there is a famous scene where Ray Kinsella met his father (who had passed away earlier) and they strolled across the beautiful baseball field Ray had built nestled in an Iowa cornfield. Ray’s dad paused and asked, “Is this heaven?”

“It’s Iowa,” Ray answered. But he went on to ask his dad if there was a heaven. “Oh yes,” was the response. “It’s where all your dreams come true.”

“Maybe this is heaven.”

I found my hockey heaven this past weekend in Winthrop, Washington.

Playing hockey outdoors is the equivalent of playing baseball in an Iowa cornfield. There is something incredibly pure about skating on ice outdoors with views of the hills and mountains in the distance.

I had heard about Winthrop since my son started playing junior hockey years ago, and the stories about the experience from fellow parents were powerful. Then as I began playing hockey myself and learned about adult tournaments that were held at the rink, I became envious of those who got to participate.

This year I finally had my opportunity to experience it myself. Thanks to my hockey friends and community, I saw a post on Facebook from a tournament team looking for extra skaters to round out their roster. Given that the tournament falls on Veterans Day weekend, I thought it was a great opportunity to check this bucket list item off while enjoying a long weekend together with the boys. Renee supported the idea and I signed on.

We made the four-plus-hour drive across the state on Thursday afternoon – navigating our way through one of our endless “atmospheric river” rainstorms and arriving safely near dinner time.

My first game was scheduled for Friday morning at 8:50 a.m. and I showed up about 45 minutes early (the rink is literally three minutes from our hotel). After parking in the main lot that overlooks the rink and facility, I grabbed my gear and took in the scene. Nestled in the mountains was this beautiful outdoor rink and I could see and hear the familiar sounds of hockey – skates, pucks and referee whistles. I smiled and took a picture – this wasn’t going to be a typical Friday morning! It all made me feel like a young boy getting ready to play a game with other kids on a frozen neighborhood pond.

I knew a few of my tournament teammates from Friday Night Skates and previous beer league teams, but most were new to me. The Collateral Damage crew was friendly, fun and welcoming. They had the right attitude and expectations – we were here to have fun. Due to COVID we had to use outdoor tents as our locker rooms. It was chilly to be sure – but the upshot was we literally walked out of the tent and were on our bench.

Skating on the ice for warmups almost felt magical. Feeling the cold, fresh morning mountain air breeze across my face as I scanned around and took in the scenery energized me. Soon the puck dropped and we were underway. I was playing a hockey game outdoors! And it was a blast – even though we lost our first game 2-1 and the following two games as well. This placed us in the third-place final game Saturday night, scheduled for 9:10 p.m.

We heard that a weather front was approaching and hoped we wouldn’t get rained on during our last game – we joked that maybe we’d get lucky and have some light snow instead. Well, we got our wish – the snow began falling in early evening and was accumulating as our game time approached. When I arrived at the rink the snow was falling hard – to the point where referees and officials had to shovel snow off the ice during the breaks between periods. We wondered what it would be like for our game.

The Zamboni driver collected and dumped at least four to five loads of snow off the ice before our game, but the ice was clear at least. Skating on the surface was rough – as was passing and shooting the puck. But we played our game and it was an exhilarating experience – even with wet/frozen hands and fingers and even though we lost again. The team played/skated hard and battled to the end – and most importantly there remained lots of laughs and support for each other.

I’m so grateful for this experience – it’s a memory that will stick with me for the rest of my life.

And now on to some new questions submitted by readers!

Q: Normally in team sports players sub in and out when the clock is stopped but in hockey it seems different. What exactly is happening when players are subbing in/out? Can both teams sub at the same time?

A: You’re right – player substitution is different with hockey compared to other team sports. Player substitution is allowed during play but it needs to be coordinated. Technically you need to have a player off the ice (or in the process) before another enters play. Sometimes you do see a penalty for too many players on the ice when a player comes out too early or there is miscommunication. So you see a lot of substitutions throughout the game as shifts are relatively short. According to HockeyAnswered.com, on average a player’s shift in the NHL is 47 seconds on the ice. There are differences amongst defensemen and forwards, as a defensemen will take a slightly longer shift at avg. 48.6 seconds versus a forward who takes an average 46-second shift.

Teams are allowed to sub simultaneously – you often see them doing this when there is a break in the action and there is a face-off. However, sometimes a team will be prevented from bringing subs during a break. Here is a more detailed overview about how line changes work in hockey.

A: Here is a quick snapshot (thanks again to our friends at HockeyAnswered.com):

The different types of penalties are: minor, major, misconduct, match penalties and penalty shots. A player can receive a combination of these penalties at one time. The length of an individual penalty can range from two minutes to removal from the game.

The two-minute minor penalty is by far the most common of all the penalties called, with 88% being of this type. Common types of minor penalties are slashing, tripping, holding, roughing, interference and cross-checking.

Here is a complete list of all the types of penalties received and what the actual punishment is for each penalty.

Sorry, I don’t know when the Kraken will start winning games again but keep submitting those questions!

Edmonds resident and business owner Dave Kaufer is a hockey fan and beer leaguer. Readers can submit hockey questions to him directly at davidrkaufer@gmail.com.