Of the three council races, two of them involved incumbents. Position 1 Councilmember Johnson, seeking her third term on council, was leading challenger Alicia Crank, garnering 57% of the early returns or 5,120 votes. Crank, a nonprofit executive who is also vice chair of the Edmonds Planning Board, received 42% of first-day results, or 3,796 votes.

“While tonight’s results are disappointing, we’ll keep waiting for the final numbers,” Crank said. “But no matter what the outcome, this is the beginning of something. You don’t have to be in elected office to make changes in the city where you live. This is my home.”

In Position 3, incumbent City Councilmember Adrienne Fraley-Monillas — seeking a fourth term — was behind in her race against former city councilmember and mayoral candidate Neil Tibbott. Fraley-Monillas received 32% of votes (2,830) to 6,056 for Tibbott (68%).

“We are in a place where citizens of this city feel they have not been heard,” Tibbott told supporters gathered at downtown Edmonds’ Cafe Louvre. “We are ready to build trust again. When I say want you to add your voice to city politics, I mean it. I really, really mean it. I believe we need to relearn how to be a community and to knit ourselves together into a community. I aim to lead that.”

Two newcomers are hoping to permanently fill the Position 2 council seat vacated when then-Councilmember Mike Nelson was elected mayor. Luke Distelhorst, who was appointed in January 2020 to serve the remainder of Nelson’s term, was defeated in the August primary. In the Position 2 general election race, Janelle Cass, who owns Ohana Hyperbarics in downtown Edmonds, received 52% of the vote (4,672) in early returns, compared to 48% (4,328) for Will Chen, who operates the Will Chen CPA, PLLC firm near Highway 99.

“I want to thank all the voters of Edmonds for their support and participation in this election. So many people donated their time, talent and treasure to this campaign and I am honored to have them on my side. Edmonds has been lucky to have two great choices for city council position 2. Overall, we have some big wins for Edmonds, and I look forward to seeing the final results of this race over the next few days.“

In the Town of Woodway, all positions for mayor and town council were unopposed, with Mayor Mike Quinn and Councilmembers Rajeev Thakur, John Brock and Brian Bogen winning their respective races.

In the election for Edmonds School Board Director District 2, Keith Smith was leading Melissa Stepp in early returns, with 13,279 votes (66%) to 6,604 (33%) for Stepp. Both are seeking the District 2 seat being vacated by longtime board director Ann McMurray, who is not running for re-election. While each school board director position represents a specific district (District 2 covers Mountlake Terrace and Brier), they are elected by all voters.

Edmonds School Board Director Deborah Kilgore was running unopposed for her District 4 seat.

“I look forward to another term on the school board, during which I expect the district will continue to make forward progress in offering a world-class education to all students regardless of circumstance,” Kilgore said. “Thanks to everyone in our Edmonds School District community who support our schools and our kids!”

There are two seats up for election on the Public Hospital District No. 2 Board of  Commissioners. In Tuesday’s results, University of Washington-Bothell Assistant Vice Chancellor Carolyn Brennan was ahead in the Position 2 race, receiving 74% of the vote to 26% for attorney Rico Tessandore. For Position 5, Dr. Jim Distelhorst was leading challenger Anita Shad with 62% of the vote. Shad received 38% in early returns.

And in the race for seats on the South Snohomish County Fire & Rescue RFA Commission (before voters in the city of Lynnwood and unincorporated areas), David Chan was leading Rashawn Smith for Position-at-Large 7 with 68% of the vote. while Derek Daniels was ahead of Maya Ojalehto, 51% to 49%.

You can see all results at this link. The next round of results will be released at 5 p.m. Nov. 3. 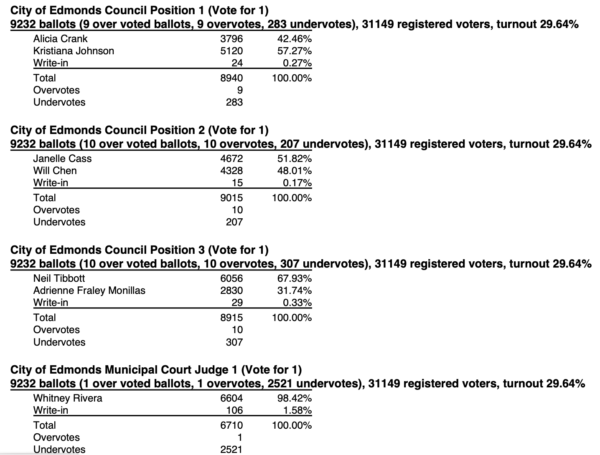