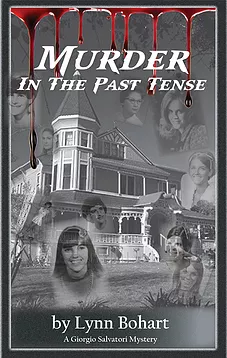 Murder In The Past Tense, by Lynn Bohart

There’s a gruesome discovery lying in wait. Decades go by. People move on with their own lives in Southern California. Then one day, one very routine, regular work day, that body is discovered. At first no one knows who it is, but there are clues. Detective Giorgio Salvatori is called to investigate.

History has not been buried forever. History has secrets to show, heartbreak to revisit, and sinister acts to finally bring to justice. This death was not natural. No, this death was a violent act. Giorgio will not stop until he uncovers the whole truth, as dirty as it may be. Although many have forgotten those days way back then, this investigation will finally revive the memories of the innocent that were wronged. But how will Giorgio do that, when someone is throwing obstacles in his path, and threatening him and his family? Is there a paranormal force that may also help Giorgio?

The second book in the Giorgio Salvatori mysteries, this detective moved from the New York Police Department to a small town in Southern California to bring his family away from the crime of that large city. Now he’s confronting a murder mystery that touches his heart. It’s a brutal murder. As if he’s not motivated enough to solve the mystery, he’s also haunted by an image that seems unrelated yet is pushing him to uncover clues. It’s a mystery within a mystery.

The Southern California setting is so vividly described in this story. The characters are dynamic. Giorgio’s family life with his wife and children is brilliantly depicted and contrasted with his job. His brother also assists in this case, and the ties bind despite some frayed threads. Their partnership is fascinating.

It’s compelling to watch a police detective who is driven by facts and where the clues lead him also steered by a paranormal force that appears directly to him. Giorgio is more comfortable with facts, but cannot turn away from anything that can help him deliver justice and solve this mystery. The picture of the victim, and the way the author artfully tells this character’s story allows the reader to fully get to know them.

Wendy Kendall is an author with The Wild Rose Press. Her mysteries include Kat Out of the Bag and the prequel Purse-Stachio Makes A Splash. Her newest ebook — Snow Kiss Cookies To Die For — is available for preorder before its 12/1 release.