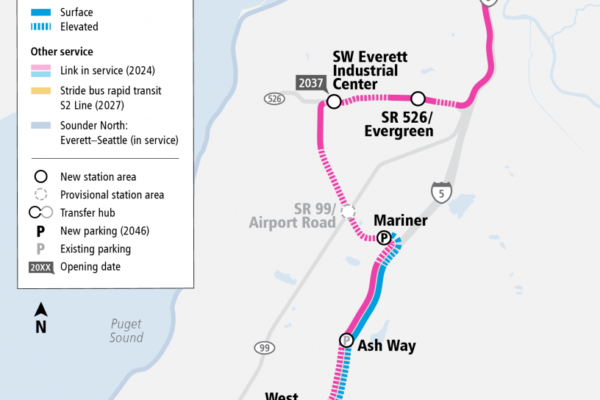 Sound Transit has kicked off early scoping work on the plan to bring a regional light rail extension to downtown Everett, with two virtual public meetings scheduled this month.

Community members can learn more and provide feedback through an online portal at everettlink.participate.online/

The regional light rail extension to Everett Station is set to include 16 miles of elevated and at-grade light rail from the Lynnwood City Center Station to Everett Station. It includes six new Link stations at West Alderwood, Ash Way, Mariner, SW Everett Industrial Center, SR 526/Evergreen and Everett Station. A seventh unfunded (provisional) station at SR 99/Airport Road will also be studied during the planning process. The project also includes a new operations and maintenance facility, referred to as OMF North, along the alignment in Snohomish County. OMF North will support the overall Link light rail system and is scheduled to open in 2034.

Early scoping is part of the alternatives development process for the Everett Link extension, targeted to open in Everett in 2037. This target schedule requires an estimated $600 million in additional funding and/or savings, and we will seek out all options to open for service on this timeline. However, if additional funding and/or reduced project costs cannot be secured, the timeframe that is affordable to open service to SW Everett Industrial Center is 2037 and opening service from there to Everett Station is 2041.

As part of early scoping, members of the public, tribes and agencies are invited to provide input on the potential routes and locations for stations and an OMF, as well as to help identify and provide feedback on potential project benefits and impacts on your community, the environment and transportation. The public will also be able to provide feedback on the project’s draft purpose and need.

During alternatives development, staff will assess the representative project and other potential alternatives, based on additional public engagement and technical analysis, further refine the route, station and OMF locations, and other project elements. The representative project itself is based on extensive planning and public involvement work, including high-capacity transit studies, the process to update the agency’s long-range plan, and the work to develop the ST3 Plan.

Throughout the alternatives development process, Sound Transit said it will continue to engage with the public to solicit feedback. At the end of the alternatives development process, if the resulting range of alternatives involves the potential for significant adverse environmental impacts, Sound Transit and the Federal Transit Administration will invite public, tribal and agency comment on the scope of an Environmental Impact Statement (EIS), the agency said.

More information, including maps of the representative project, is available at www.soundtransit.org/everettlink.