“Do you want to see our new babies?” asked Erin Comstock when I wandered into Comstock Jewelers in downtown Edmonds the other day.

“Yes, they’re in the back room.” And this is what greeted me! 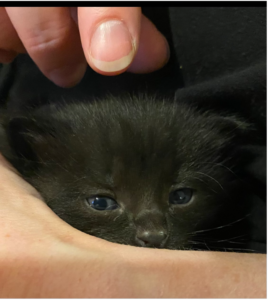 Brian Comstock had heard it first – the odd sound after he parked the car. His wife, Erin, joined him – and this time, both of them heard a faint, forlorn “meow.” It echoed from a 3-foot-deep landscape well beside the garage of their Edmonds home. They peeked over the edge, down into the gravel bed, and heard it again. This time, the tentative meow came just as they spotted a fuzzy little head poking out from under the house. A tiny kitten inside a small opening in the foundation.

There was no way they could wiggle down into the landscape well to reach the fur ball. It was past 9 p.m., cold and getting colder. Erin Comstock told us “I called animal control, they had no one available at that time, and to call the non-emergency 911 number. That dispatcher said she would send an officer.”

That officer was Josh Hwang, who volunteered to wedge himself down into the well, shine his light into the crevasse and stretch just far enough to grab the kitten. But as Josh brought up the animal, he told the Comstocks, “Wait, there’s something else.” Back down into the opening… another long stretch… and up came kitten number two.

That’s when officers Tanner Locke and Erik Sanchez stopped by to see what Hwang was up to. They were just in time to form a rescue brigade and help haul out kitten number three.

Every time Hwang focused his light, another kitten appeared way in the back of the cramped opening.  That’s how they found and rescued kitten number four.

But they weren’t done yet: another meow – another kitten – number five. And then – only then – were they done.

Erin Comstock said that all of them “were surprised.” They were then concerned that the kittens were OK. “Were they hungry? What do we feed them? We need to get them warm… and that they were so small and adorable,” she said.

“The police were terrific,” she added. “They were so happy to have been able to help us.” 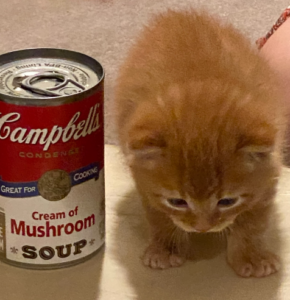 Five kittens, each no bigger than a can of soup, all pulled out of that dark hole. Sadly, there was no sign of the mother cat. The best anyone’s been able to guess is that mom was a feral cat and left the kittens after weaning them, or that a coyote had gotten her. The Comstocks left food, just in case, but momma cat never showed up.

Dr. Ann Brudvik and her team at Woodhaven Veterinary Clinic checked them all out. When the Comstocks found them, the kittens were about three weeks old, and each weighed only 11 or 12 ounces. Brudvik and her team, along with Lynnwood’s PAWS (Progressive Animal Welfare Society), gave feeding and care advice, with support from Jessi Gilginas with Edmonds police animal control.

They were too small to be adopted out at that point. So, Erin and Brian and daughter Sara got a portable crib from friends, cat-proofed it, and that’s been home ever since.

Click here to see video of kittens at play.

During the day, they pack their brood – Bear, Buddy, Joey, Mable and Penny – off to the jewelry store since the kittens need around-the-clock care.

At night, they’re back with the Comstocks. The family is going to keep three of the fur balls and hasfound loving homes for the other two.

I asked whose idea it was to keep three. “Brian’s,” laughed Erin. “He fell in love with them; took one look in their little faces and he was ‘kitten smitten,’”

A strange noise outside the house… a man with a keen ear…. an Edmonds police rescue squad… five kittens saved… a Christmas Kitty Kaper that ended “purr-fectly.”