Edmonds “is becoming a mockery” with the endless debate over the temporary outdoor dining structures known as streateries. That’s the blunt assessment of Salish Sea Brewing’s Jeff Barnett, after a special Edmonds City Council meeting Monday collapsed without any amendments to its downtown streatery plan.

If there is no reconsideration of the current plan, approved by the council Dec. 16, the city will charge each streatery $4,000 for a permit — with the money to be paid by Dec. 31 — and the locations will only be allowed through April. (Under the plan, all money will be designated for leasing additional parking to replace that taken by the streateries’ use of public parking spaces.) In addition, any streatery that closes must remove its structure by Jan. 15. The Monday meeting was scheduled to reconsider those rules — including a lower fee — but with two members absent, one virtually leaving the meeting and a fourth who felt uncomfortable taking a vote of just the remaining members, the meeting abruptly ended without any action.

Barnett, who operates a streatery outside his brew pub on Dayton Street, calls the fee “outrageous.” With a staff of 25 and facing higher prices for supplies and an increase in the state minimum wage to $14.49 an hour in January, he told My Edmonds News that instead, “I’m gonna pay my staff,” and will close his outdoor street space.

Chanterelle on Main Street is also giving up its streatery. Manager Tiffany Tran said that “the amount we would be paying wouldn’t be worth it to keep.” Tran and her father own four other restaurants in the Seattle area.

“Our priority is just to keep the business open and running for our customers. I would love to keep it financially, but it’s a lot more expensive than I originally thought it would be,” Tran said.

Feed Me Hospitality, which runs three streateries, will keep the one at Salt & Iron open, as well as the location at the MarKet. Co-owner Shubert Ho said it is likely that they will shut down the streatery at Fire and the Feast (the alley-way outdoor space there will remain open since it is on private property).

“We’re trying to focus on positives to keep (streateries) open for a few more months,” Ho said. “If they (the Council)  decrease the fee, that would be great”.

At Santa Fe next to the downtown Edmonds fountain, the streatery will stay. “I’m a little discouraged but we probably will pay the fee – uncomfortably,” Manager Ricky Bobadilla said, He added they may look for “some creative way” to raise funds to keep it going. Bobadilla said that Santa Fe’s space has been very busy, and with the COVID omicron variant spreading, they need outside space for customers.

These restaurateurs all told us they are unhappy with the way the Edmonds City Council has handled the streatery plan; the collapsed Monday Council meeting was the last straw for Jeff Barnett. “If you’re going to walk out on your job, then let’s hire somebody else,” he said. “They chose to do this; they should be ashamed.”  Barnett added, “they need to remember we’re doing this (streateries) because of the pandemic, not to make more money.” It’s a sentiment that Bobadilla echoed: “‘It’s (council action) starting to sound petty, a lot of the bickering.” Ho agrees: “We’re tired of hearing all this back and forth with city council and it’s time to move for us.”

City Councilmember Will Chen, who proposed the original rules and had favored the Monday reconsideration, issued the following statement Tuesday night, stating he supports reconsidering the streateries issue at a special council meeting Tuesday, Dec. 28:

“Despite the unfortunate outcome of Monday night’s special meeting, I still believe that we can find a compromise that allows for these establishments to operate beyond the sunset date of December 31st, and I am fully committed to having this dialogue so long as it is done with full transparency and proper disclosure. I strongly support having another special council meeting on next Tuesday December 28th to come up with a win-win solution for all stakeholders.”

(You can read the full statement on Chen’s Facebook page.)

City Council President Susan Paine said that no meeting is currently scheduled, but added that “things could change.”

Ho suggested that though the council meetings have been “very contentious,” there’s a good lesson learned – the city is getting more public input for the first time in a long time,” adding that “everybody’s starting to pay attention and if you can’t govern with a level head, it affects your constituents and those in the public eye.”

While the council juggles the future of streateries, Feed Me Hospitality — the restaurant group owned by Ho and Andrew Leckie — is pushing to keep street dining front and center alive. 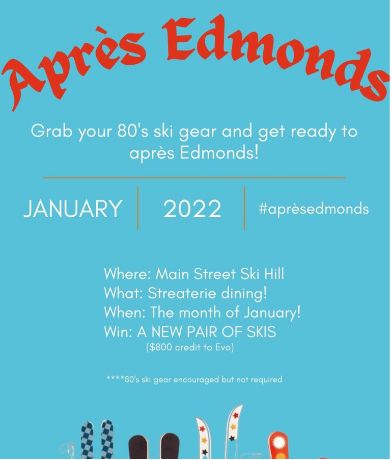 They have invited all streateries to join in creating a January street dining event. It is called “Apres Edmonds” — a throwback to the 1980s apres ski parties on the slopes. There is no specific date set yet, but the idea, they said, is to make street-side dining an adventure and show Edmonds what can be done with alternative dining options.