It’s been almost two years since I have had the opportunity to give a theatre review. Walking into the Wade James Theatre and seeing the warmly lit stage filled me with nostalgia and hope for what is to come. The stage was perfectly designed to immediately transport you back to a time where radio shows would tell you a story, and your imagination would fill in the imagery. Set to look like a radio station during the holidays, the softly falling snow coming through the back window was a very nice touch.

This setting was especially reminiscent for me as I grew up watching the Sandy Bradley Potluck show broadcast in front of a live audience each week from the Museum of Natural History in Seattle. I have fond memories of the moment the “On Air” sign would light up and the applause sign would get the audience clapping and engaged in what was to come — the actors in full character preparing for their upcoming radio show. Seeing this live radio show presented by Edmonds’ Driftwood Players and the dance between characters as they switched who they were voicing made for an entertaining and new way to enjoy the classic story of It’s a Wonderful Life.

The story kept its drama and its heartfelt moments through the voice acting of the talented actors; Nicola Amos as Lana Sherwood, Walt Foster as Harry “Jazzbo” Heywood, Katelyn Hamilton as Sally Applewhite, Douglas Newell as Fredie Filmore and Dan Ruiz Salvatura as Jake Laurents. Each actor was playing a character who was part of the radio show team, voicing a variety of parts as the show continued. The evening I attended there was a last-minute change in actors due to a potential COVID exposure, and the sound designer jumped into the role with great enthusiasm (and fit in seamlessly). The performance is directed by Craig Schieber and there is a Foley artist (a creator of sound art — read more about that here), Robert Quick, who provided all of the sound effects live on stage.

Some of the most delightful moments came with the commercial breaks — once before the intermission and once at the end. It was a nice juxtaposition of comedy to lighten the somber tone of the story. It also reminded the audience of the authentic nature of this show — we were truly watching a radio show.

As for the safety and health protocols, I felt like the volunteers and staff really did a wonderful job. Proof of vaccination or a negative COVID test was required to enter the building, and groups were seated separately with plenty of space between audience members. All audience members remained masked for the entire performance, and there was a short intermission for anyone who needed to go outside and get some air. There were no concessions, but it did not take away from the evening. 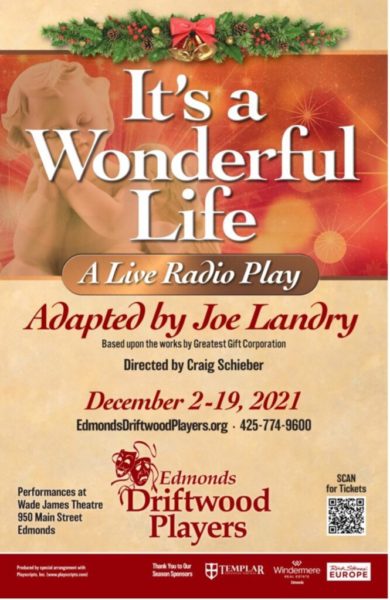 I highly recommend this production. There are tickets still available for this coming Thursday through Saturday at 8 p.m. Tickets are $28 for general and $25 for Jr/Sr/Military. All tickets can be purchased on the website or by phone at 425-774-9600.