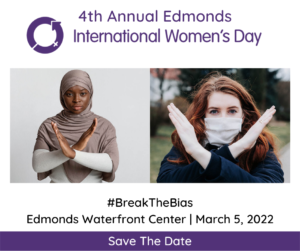 With an international theme for 2022 of #BreakTheBias, the Edmonds International Women’s Day — which Crank founded in 2019 — is scheduled to be a hybrid event, with local speakers. There will also be VIP reception at downtown Edmonds’ Workhorse HQ following the afternoon sessions.

Spearheaded by Crank, the #BreakTheBias themes are relevant to many Edmonds community members, according to an event announcement issued Monday. “Bias isn’t just about race, gender and sexual orientation,” Crank said. “Disability inclusion and accessibility is also an issue in the community and the workplace. Many times, our bias can be unconscious. The speakers we are lining up for this event will be able to shed more light on how we can break these biases.”

Crank said she will be reaching out for event sponsorship, to help underwrite the free. “It’s important to me to keep this event accessible to all members of our community, especially in this economic downturn many of our family, friends and neighbors are experiencing,” she said. “There will also be a lunch option available for purchase, and we hope to raise additional funds to cover those costs, especially for youth that attend the in-person portion of the day. Our goal is to raise $5,000 to cover these expenses.” Anyone interested in sponsoring can view the sponsorship packet here.

While the speaker lineup will be announced over the coming weeks, one of the panels scheduled for the event will feature women judges in Snohomish County. “I’m thrilled to have the Honorable Anna Alexander, the Honorable Cassandra Lopez-Shaw and the Honorable Whitney Rivera in our speaker lineup,” Crank said. “Their wealth of diverse experience will make for a great conversation and learning opportunity for those in attendance.”

International Women’s Day, held on March 8, is a global day celebrating the social, economic, cultural and political achievements of women. The day also marks a call to action for accelerating gender parity. International Women’s Day (IWD) has occurred for well over a century, with the first IWD gathering in 1911 supported by over a million people in Austria, Denmark, Germany and Switzerland. Prior to this, the Socialist Party of America, United Kingdom’s Suffragists and Suffragettes, and other groups campaigned for women’s equality.