The much-anticipated snow arrived overnight in the Puget Sound region, with several inches covering Edmonds as of Sunday morning.

A reminder that the City of Edmonds follows these priority snow removal routes, in case you are wondering whether your street is on the schedule.

Edmonds police were advising drivers to stay away from 220th Street Southwest, which runs between Highway 99 on the Edmonds/Mountlake Terrace border and Interstate 5, where multiple vehicle spinouts have occurred.

The Edmonds Library reported it would be closed Sunday due to inclement weather.

Here’s a photo that Matt Richardson sent of waves cresting over the waterfrot railroad tracks: 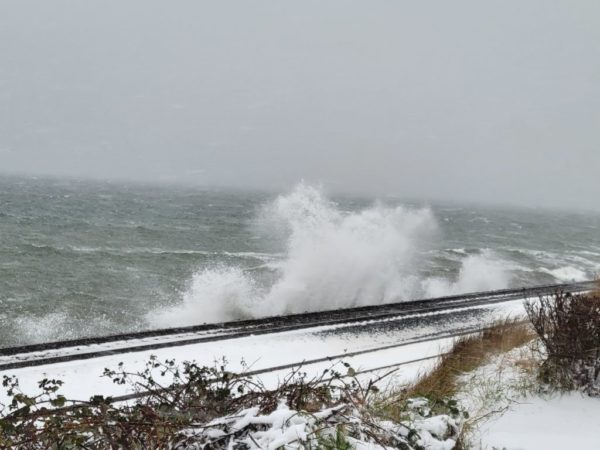 Edmonds photographer Janine Harles shared this video of the wind and waves on a snow-covered beach:

According to the Seattle Times, the National Weather Service observed a low temperature of 27 degrees at Sea-Tac Airport Saturday night, but temperatures were predicted to dip throughout the day and drop as low as 18 degrees Sunday night. Whatcom County and the northern Olympic Peninsula saw the most snowfall overnight: Downtown Port Angeles saw 11 inches of snow, while Bellingham reported up to 8 inches with wind gusting up to 52 mph, the Times said.

The National Weather Service said via Twitter Sunday morning that in general, “snow will really begin to taper off this afternoon/evening.” However, there is a chance that the northern Olympic Peninsula will receive several more inches, the weather service said.

Have Edmonds snow photos to share? Email them to myedmondsnews@gmail.com.