After weeks of smooth sailing, including several unanimous votes, the Edmonds City Council found itself back in choppy waters for a bit Tuesday night when councilmembers began discussing amendments that had been proposed to the council’s already-approved 2022 budget.

Considering amendments to the budget, which was approved by the council in November, was proposed by Councilmembers Diane Buckshnis and Kristiana Johnson. Two other councilmembers also submitted amendments, Buckshnis said.

The amendment list was accompanied by a council agenda memo that became the flashpoint for discussion Tuesday night. The memo repeated assertions — made by some councilmembers last fall — that the budget process was accelerated beyond its traditional schedule, and suggested the possibility that it was not compliant with the state’s Open Public Meetings Act (OPMA).

Councilmember Susan Paine, who oversaw the budget deliberation process while serving as 2021 council president, pushed back hard against the memo language. She called it “highly personalized,” noting it specifically mentioned her by name five times, and declared as false the memo’s claim that the council didn’t have adequate time to consider it. “This has not been an unvetted budget,” Paine said.

Both Paine and Councilmember Laura Johnson disputed the memo’s allegation that the budget process violated the OPMA. “That’s not accurate at all,” Paine said. To reinforce that point, Laura Johnson asked City Attorney Jeff Taraday to confirm his earlier statement — made during the 2021 budget deliberations — that the council’s process in his opinion didn’t violate the OPMA — which he did.

“Having this sort of information here in an agenda memo is entirely wrong,” Paine added. She made a motion — seconded by Laura Johnson — to strike out all of the information in the agenda memo, and that was approved by a 4-1 vote, with Council President Vivian Olson and Councilmember Neil Tibbott joining Paine and Johnson in voting yes. Councilmember Kristiana Johnson voted no while Councilmembers Buckshnis and Will Chen abstained.

There was also a spirited discussion about whether the council should take any votes on the proposed amendments Tuesday night, since a public hearing on them has been scheduled for Feb. 1 — and the public should weigh in first.  Buckshnis had proposed the council narrow the list of amendments Tuesday night to those receiving a supermajority (five or more) vote of councilmembers, since a supermajority is what will ultimately be required to approve changes to the budget.

But in the end, the councilmembers voted 6-1 (Councilmember Kristiana Johnson against) to support Chen’s motion to vote on budget amendments Feb. 8, during a special meeting to be called after regularly scheduled council committee meetings.

Among the amendments under consideration: removing a full-time police commander, police body cameras and the police scuba team; deleting a solar grant program for low-income households; removing an additional $200,000 for the city’s human services department; and removing a new full-time position to manage the city’s capital projects. There is also an amendment to remove the new full-time Race, Equity, Diversity and Inclusion (REDI) program manager, stating that using a consultant for this purpose is sufficient.

The amendments also include adding several expenditures; among them, $70,000 for the city’s Diversity Commission, $100,000 for the Creative District’s 4th Avenue Cultural Corridor project, $60,000 for a study of a police station and/or city hall relocation and $150,000 for streetlights in the Lake Ballinger area.

You can read all of the proposals here.

In other business, the council heard an update from City Wastewater Treatment Plant Manager Pamela Randolph on the city’s carbon recovery project. For background, the project will process the city’s wastewater treatment plant sludge using pyrolysis and gasification. The process also produces a biochar product that can be marketed as a soil amendment. The new system is replacing Edmonds’ aging mechanical sludge incinerator, which had become increasingly expensive to maintain due to more stringent air quality standards. The total cost of the project is $26 million, but because three other municipalities — the City of Mountlake Terrace, the Olympic View Water and Sewer District, and the Ronald Sewer District — send their sewage to Edmonds for treatment and disposal, the cost of the new system is being split, with Edmonds paying 50%.

The council in October 2020 passed an ordinance authorizing nearly $14.4 million in revenue bonds to finance the project.

During her presentation, Randolph explained the tight footprint the city is working around to replace the existing equipment. Much of it has had to be removed by hand, including the incinerator that was taken out “brick by brick,” she said.

She also pointed to several challenges the project has faced. Initially, she said, there were “quite a few problems with odor,” due to the fact the city has been transporting untreated sludge to the landfill temporarily until the project comes online. The city has addressed those, for now, by purchasing odorant to mask the smell, but in February there could be additional short-term odor issues while the city temporarily shuts down its solids processing, Randolph said.

The project has also experienced construction impacts due to supply chain and staffing challenges that have caused “significant cost overruns,” she said. The COVID-19 pandemic has played a role as well, since it has limited staff’s ability to meet with partners and contractors face to face to team-build and problem-solve.

All of these issues could potentially add to the project’s scope of work, but the city is in negotiation to resolve those, she said.

In addition, the project received notice of an asbestos violation following an impromptu inspection from the Puget Sound Clean Air Agency, after an inspector noted that renovations had begun without an updated Asbestos Hazard Emergency Response Act report. Work was stopped until the report was obtained. The city believes it was following regulations as written, and the matter has been appealed to the Pollution Control Hearings Board, Randolph said.

On the bright side, Randolph said the city is seeking potential funding sourses for cost overruns, including energy incentives, grants and tax savings.

Long-term, Randolph mentioned another challenge that Edmonds and many other treatment plants statewide also face. The Washington State Dept of Ecology has issued new requirements for nutrient removal — known as the Puget Sound Nutrient General Permit. These requirements will increase treatment plant costs and reduce plant capacity — and will also require the city to engage in another capital project down the road to accommodate the requirements.The council also:

–Learned more about a proposed city code amendment that would require the inclusion of facilities for short- and long-term bicycle parking in all multifamily and non-residential development. Development Director Susan McLaughlin began the presentation by noting that providing bike parking ties to the city’s sustainability goals. City Senior Planner Eric Engmann then explained the difference between short-term bike parking, such as bike racks at building entrances, and long-term parking that includes a secure, on-premises space. Under the proposal, required short-term bike parking would be 1 space per 10 in multiple dwelling units and 1 per 12 vehicle parking spaces in non-residential units. For long-term parking, the requirement would be 0.75 per unit in multifamily housing and 1 per 25,000 square feet of floor area in non-residential units.

– Considered a proposal by the city’s administrative services department to replace existing Enterprise Resource Planning Software (Eden) with a five-year contract for the OpenGov Budget Suite. Administrative Services Deputy Director Megan Menkveld said that the proposed budget system would provide a more user friendly interface for both staff and the public, including a feature that allows those interested to access an interactive online budget book. The cost (revised upward slightly from earlier estimates) is $394,610 for a five-year contract. It would be funded by federal American Rescue Plan Act dollars. This item is scheduled for approval at next week’s council meeting. 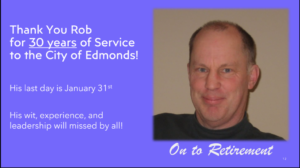 – Recognized the work of 30-year city employee and current Planning Manager Rob Chave, who is retiring from the city Jan. 31. Mayor Mike Nelson called Chave “a class act who does not rattle easily,” adding he “will be greatly, greatly missed.”

– Unanimously approved the city’s Non-Represented Employees Compensation Study, which determined that the city’s current non-represented salary scale is approximately 6% below market rate. You can read more in our previous story here.