An update on the draft 2022 Parks, Recreation & Open Space (PROS) Plan, a review of contracts for tenants at the Frances Anderson Center and a discussion of a compensation study for non-represented employees were among the items considered during the Edmonds City Council’s three committee meetings Tuesday night.

No decisions are made during committee meetings, but councilmembers are able to ask questions of staff and in some cases made recommendations for consideration at future council business meetings.

Perhaps the most visible item to be considered during the three committees was the draft 2022 PROS plan, which provides a six-year roadmap for managing the city’s parks, open spaces, trails and recreational opportunities. The last plan was issued in 2016.

City Parks, Recreation and Cultural Services Director Angie Feser told the council’s Parks and Public Works Committee that a completed plan is required by March 2022 to ensure the city is eligible for the latest round of grant funding through the State of Washington’s Recreation and Conservation Office — a main source of city grants.

The city has been working on the new plan since January of 2021, and those efforts have included extensive community engagement with a particular focus on involving Edmonds residents across the city. To assist in that effort, informational fliers and meeting presentations also included translations in four languages — Chinese, English, Korean and Spanish

The draft plan was released to the public on Jan. 7, and will be reviewed by the Edmonds Planning Board Wednesday, Jan. 12. The full city council will consider the plan during three nights in February, with plan presentation Feb. 1, a public hearing Feb. 15 and council approval scheduled for Feb. 22.

The plan will be officially adopted as part of a city Comprehensive Plan amendement in the fourth quarter.

During public meetings, participants identified their priority improvements to both the park and recreation systems. For parks, “trails and walking by far were the highest priorities,” Feser said. 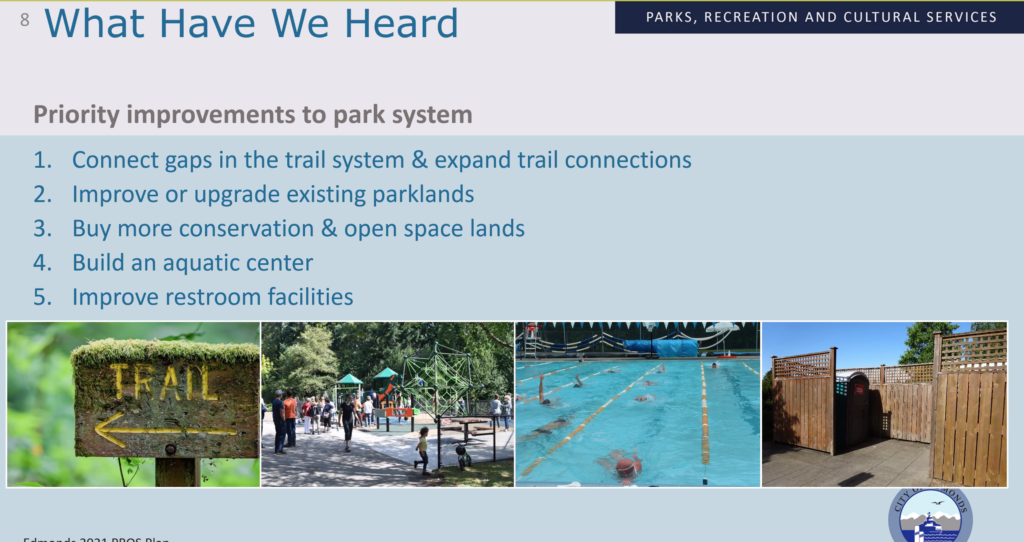 The top priroties for recreation activities and program options included community events, such as outdoor movies and summer concerts; outdoor programs such as Beach Rangers or environmental education; youth programs such as summer day camps, arts or gymnastics; and youth sports programs and camps. 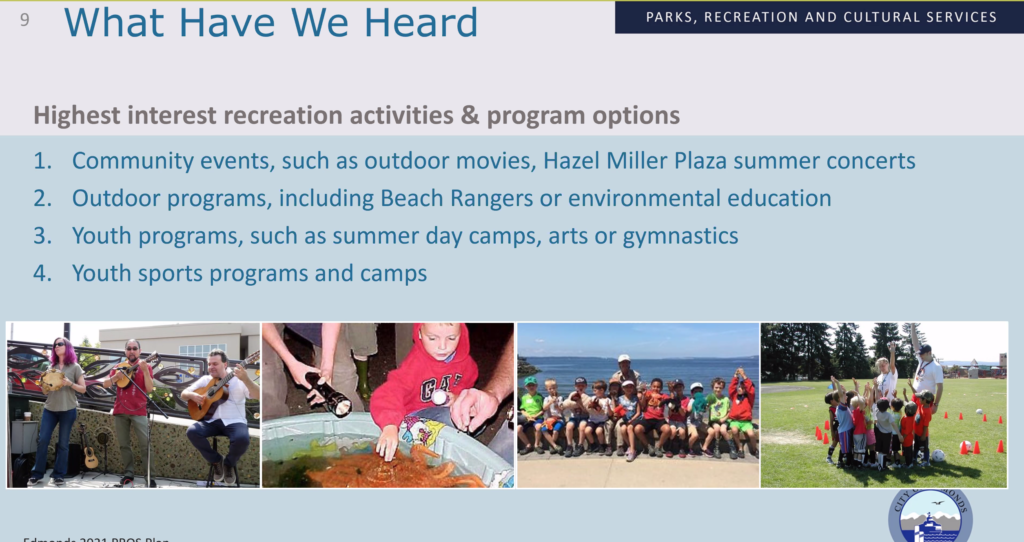 The tenants are facing a 5.52% city rent increase based on the Cosumer Price Index for All Urban Consumers (CPI-U), even though some of them have been affected by the current closure of the Frances Anderson Center to the public due to COVID. (The two day care operations are considered essential businesses and so have remained open; the other organizations have had to change their operations and in some cases canceled public events due to the pandemic.) Burley recommended that the council consider a lower 3% rent increase for this year, which was supported by both Johnson and Tibbott and will be placed on the council consent agenda next week.

In both the council’s Public Safety, Personnel and Planning (PSPP) Committee and Finance Committee, councilmembers heard detailed information regarding a compensation study for non-represented city employees. Expanding on a Dec. 7 presentation to the full council, consultants from Compensation Connections explained their methodology for determining that the city’s current non-represented salary scale is approximately 6% below market rate, and why they recommended that 29 jobs move to a higher salary range.

Compensation Connnections’ Shannon Drohman explained to the committee members — including Councilmembers Laura Johnson and Susan Paine of the PSPP Committee and Diane Buckshnis and Will Chen of the Finance Committee — that the process began by reviewing the city’s existing job descriptions and wage scales and comparing them to those from comparable cities. (See chart below.) 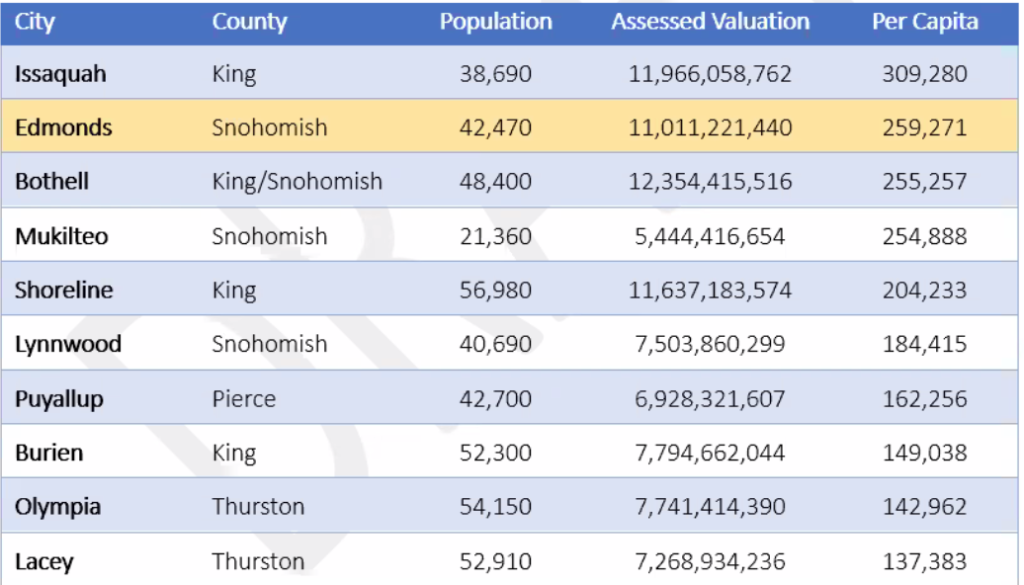 The consultant also researched additional pay data in public survey sources provided by hundreds of employers in both the public and private sectors.

The study was guided by a city council policy approved in 2021 that included four goals: to attract and retain dedicated, hardworking, diverse, talented and well-qualified employees; to pay employees fairly and ensure pay equity and internal equity; to be externally competitive with the labor market and to be fiscally responsible and legally defensible.

For the compensation study, the city used the 50th percentile (median) of the market data as its reference point to analyze the city’s existing salary and wage scales to make recommendations for adjustments. The 29 jobs recommended for a move to a higher salary range included all the city’s department directors, including its police chief, plus numerous other non-union jobs. (You can see the complete list on page 3 of the draft report’s executive summary here.

Under the draft plan, 39 non-represented city employees in those 29 job categories would be eligible for a pay increase at a cost of $220,409, or 2% of the city’s salary budget.

Consultant Drohman said it was important to note that employers face consistently low unemployment and steady wage growth for the Puget Sound labor market, which is “a challenging market for recruitment and rentention of staff.”

Human Resources Director Jessica Neill Hoyson explained that the city’s relatively low wage scale means that the city has had “to bring people in at top step at almost all positions we’ve hired recently.” As a result, employees start at the top of their salary range and they don’t have the ability for wage growth other than the annual cost-of-living adjustment.

As for next steps in the study, Neill Hoyson advised that a detailed report be provided to the full council, and that future approval could occur after the council discusses additional salary data for union employees. That will occur as part of a bargaining strategy session in a council executive session.

In other committee meeting presentations of note, councilmembers in both Finance and Parks and Public Works agreed to place on next weeks’ consent agenda a proposal authorizing the city to request proposals for the city’s job order contracting program. The program will permit the quick engagement of contractors in performing small- to medium-sized public works projects.

Also in the Finance Committee, Chen and Buckshnis began a discussion of options proposed by the Administrative Services Department for the purchase of budget and planning suite software. However, the committee ran out of time so agreed to meet again at 2 p.m. Friday to continue that conversation.

Finally, to address odors emanating from sewer gases in neighborhoods near City Park (see our earlier story here) the council’s Parks and Public Works Committee recommended for next week’s council agenda the approval of a change order to accommodate a cost increase for an odor scrubber. The total cost of the unit to be installed at City Park is $400,313, which includes a $10,000 contingency and a $20,000 management reserve. Half of the expense will be covered by other jurisdictions that send their wastewater flows to the city’s treatment plant, including the City of Mountlake Terrace and Olympic View Water and Sewer District. Some of the increased cost, which was originally budgeted for $297,000, is due to a request by the city’s facilities staff to upsize the scrubber’s vault to accommodate electric car-charging stations at City Park.