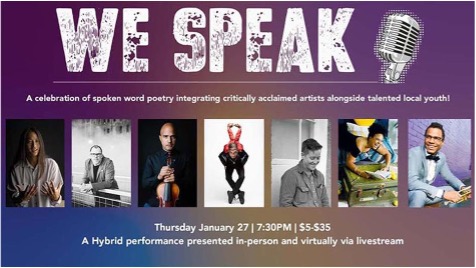 This year’s WE SPEAK Festival centers on the theme of “Connection.” After the past two years, how do we connect – and heal – as a community? Where do we see love and resilience, and how do we move forward after trauma? According to an ECA announcement:

Through performance, WE SPEAK artists address topics including (but not limited to) the global health crisis, Black Lives Matter and the racial justice movement, and experiences of disability, Indigenous, and LGBTQ+ communities. Their voices call for action, understanding and, ultimately, hope.

Because this is a hybrid event, non-local artists will appear via video submission, while local artists Chelsey Richardson and Owuor Arunga — along with student finalists from the Youth Poetry Slam Competition — will perform live on theECA stage.

Tickets to the livestream event are sold through ECA partner Mandolin. When you click on the Buy Tickets link, you will be redirected to Mandolin’s site.

The livestream event will be available for 72-hour replay after the performance.

Note that student and professional artist submissions to the WE SPEAK Festival may contain adult or explicit language.

Steve Connell, an actor, poet, thought leader and transformative entertainer whose work has been seen on ABC, HBO, MTV, and performed live at Sundance,Kennedy Center and the White House.

Drew Dollaz, a pioneer of flexing, a Brooklyn-based genre of street dance also referred to as bone breaking, which is characterized by rhythmic contortionist movements. His performances on Madonna’s MDNA tour in 2012 marked the first time flexing appeared on the world stage.

Daniel Bernard Romain, a composer, performer, educator and activist, his work spans more than two decades. He is known for his signature violin sounds infused with myriadelectronic, urban and African-American music influences.

Ivan Coyote, a writer and storyteller who was born and raised in Whitehorse, Yukon, Canada. Coyote’s stories grapple with the complex and intensely personal topics of gender identity, family, class and queer liberation, but always with a generous heart and a quick wit.

Kealoha, the first Poet Laureate of Hawaiʻi. As an internationally acclaimed poet and storyteller, he has performed throughout the world — from the White House to the ʻIolani Palace, from Brazil to Switzerland.

Chelsey Richardson is a mother, teacher and poet. In October 2007 she had the honor of winning The Gwendolyn Brooks PoetrySlam at Chicago State University, and also earned a spot three times on the First Women’s National PoetrySlam team stage to compete against some of Seattle’s greatest female poets

Owuor Arunga is a jazz trumpeter who began as a member of the Garfield High School Jazz Band. He moved to New York in the early 2000s, where he studied in The New School’s Jazz & Contemporary Music Program. He has since played around the U.S. and the world.

All ECA patrons regardless of age will be required to provide proof of full vaccination or a negative COVID-19 PCR test (taken within 72 hours of performance). Masks are required for <all patrons, in all sections, except when actively eating or drinking in designated areas: ECA’s patio and lobby. Eating or drinking is not permitted in ECA’s theater at this time.

In addition to providing proof of vaccination or a negative PCR test, guests 18 or older must present a government-issued photo ID, such as a driver’s license or passport. Guests younger than 18 may present a government-issued photo ID or a school photo ID as an alternative. Guests younger than 18 who do not have either a government-issued ID or school photo ID can only attend performances in the company of an adult who provides the required ID and vaccine documentation for themselves and can also provide documentation for the minor’s test results or vaccination verification.