While the mayor touched on a range of 2021 accomplishments and 2022 priorities, much of his focus was centered on improving the safety and livability of people who live, work and travel in the Highway 99 area.

To underscore that point, the mayor’s address was broadcast from the new neighborhood city office on Highway 99, located in the Aurora Marketplace shopping center near Safeway. The leased space, now undergoing remodeling, will be home to the Edmonds Police Department’s new community engagement coordinator, Tabatha Shoemake, and offer a place for police officers patrolling the area to complete reports, access emails, take breaks and meet with the public. A large conference room will host an Edmonds Municipal Court community court two to four times per month.

Nelson also took an opportunity to leave the podium and give viewers a virtual tour of the new space, along the way introducing Shoemake, Municipal Court Judge Whitney Rivera and Police Chief Michelle Bennett. The new space is scheduled to open to the public in early March.

In addition, the mayor announced that the city will launch a public process for naming the Highway 99 neighborhood, which the city has been referring to informally in recent months as “Uptown.” Nelson said that the naming process is part of a broader “action-oriented community renewal plan” — led by a consultant — that will start in the first quarter of this year. “A new name will help to strengthen identity, bolster community cohesion and bring new energy into this dynamic community,” he said. “We plan to do a series of interviews and stakeholder meetings along with broader surveys to capture ideas over the next couple of months.”

Also in 2022, the city plans to build on the success of Uptown summer evening market, doubling the number of market days, the mayor said. 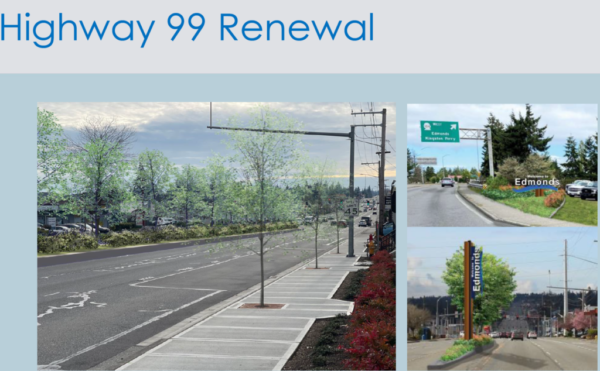 The mayor provided an update on the project aimed at improving traffic safety along the 2 1/4-mile stretch of Highway 99 running through Edmonds by converting the existing center two-way left turn lane to a landscaped raised median, with turn lanes at key points. The work on the $10 mlllion project is scheduled to be completed by the end of 2022, and “is one example of the significant investment our city is making in this neighborhood,” he said.

Throughout his speech, Nelson — who is beginning the third year of his four-year term —  stressed themes of building connections, whether it be through improving public safety  or creating public spaces citywide. He also hit on themes he has stressed during his time as mayor — enhancing human services, promoting equity, protecting the environment and acquiring parks and open space.

He began by noting the impact of the now-two-year-old COVID-19 pandemic on Edmonds and its residents. “We have had to be creative in how we live, how we work, and how we play in this new environment,” Nelson said. “We have found new ways to interact, to meet, to use outdoor spaces. We have rediscovered what really matters and what does not. And, what is unmistakable, is our desire to be connected with each other.”

As part of his 2021 accomplishments, the mayor reflected on the city’s new $500,000 human services program, which so far has helped 178 residents experiencing homelessness, housing instability, food insecurity, domestic violence and/or other household needs. With additional money approved by the Edmonds City Council for 2022, the city finalized an agreement with Compass Health for a dedicated social worker, and recruitment is ongoing.

Turning to his efforts to promote equity, Nelson described the creation in 2021 of a citywide Equity and Social Justice Toolkit and Work Plan, which he said is a roadmap for guiding city actions related both to community engagement and to establishing equitable policies, procedures and practices. The mayor stressed the importance of having “permanent support to guide this work,” which is why he included in the 2022 city budget a Racial Equity, Diversity and Inclusion (REDI) manager.

“For DEI efforts to be fruitful, organizations have to back up their good intentions with resources, putting time, energy, and money into ensuring diversity and awareness-raising work is an integral part of organizationalculture, recruitment, and larger strategy,” Nelson said. “Right now, we have an opportunity to address the question of how cities can dismantle systems of racism in government and invest in lasting and meaningful change.”

Nelson also touched on his commitment to expanding parks and protecting open spaces. He mentioned the city’s discovery of “20 more acres of waterfront and tidelands north of Brackett’s Landing that are accessible to our residents,” plus its acquistion of a one-acre parcel — bequeathed to city from the late Shirley Johnson — that “will expand Yost Park and enable the city to conserve a piece of its agricultural and farming history.” 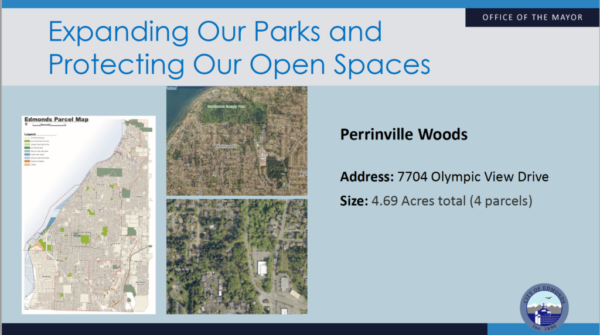 In addition, the mayor said Edmonds for the past year has “been in acquisition discussions and negotiations with landowners for several parcels including Perrinville Woods and a three-acre undeveloped parcel along Highway 99,” Staff have brought the owners’ asking price before city council, but “we have yet to come to a purchase agreement that is fiscally acceptable/feasible to the city,” Nelson said.

Noting that the city is now finalizing its 2022 Parks, Recreation and Open Space (PROS) Plan, he said that residents in surveys ranked improving existing parks, and acquiring additional land for conservation and open space, as top priorities. Returning to the Highway 99 theme, the mayor also said that “the acquisition of additional neighborhood parks is necessary to address existing gaps in park services in the South Edmonds area and along the SR 99 corridor.”

Regarding one of his environmental priorities, the mayor said the city is participating in a Salmon Safe project, with conditional certification expected in May. The process includes a review of the city’s current operations and policies around water quality that support salmon populations.

The mayor listed the following as his three priorities for 2022:

In addition to the aforementioned priorities related to a public process for naming the Highway 99 neighborhood and increasing the number of Uptown Market days so they are held every two weeks, Nelson cited two other initiatives: 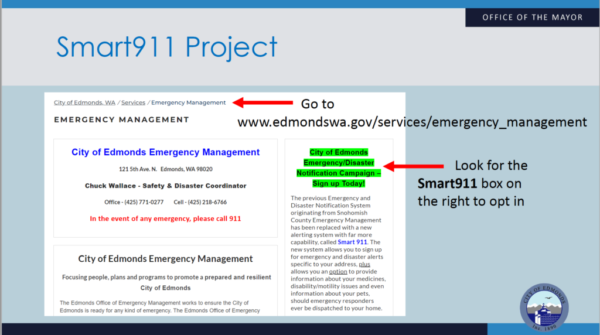 – The city is launching a new emergency communications campaign that encourages residents to sign up for county’s SMART 911 system, which alerts them to Edmonds-specific natural disasters. Through the free system, residents can choose what kind of emergency alerts they wish to receive, and allows them to add more specific information about their household, which can be used by 911 dispatchers to relay to responding emergency vehicles to their location. You can learn more and sign up on the city’s website. (Look for the Smart911 box on the right to opt in.)

– Regarding homelessness, Nelson said that in the coming weeks, his administration “will be taking more steps to address homelessness to ensure we exercise compassion and provide more shelter and critical services to help those most in need.” However, the mayor added, “for those who refuse assistance, you will not be able to stay overnight in our public spaces.”

Nelson once again mentioned Police Community Engagement Coordinator Tabatha Shoemake and the work she hopes to accomplish, “COVID permitting,” related to community policing. The efforts range from domestic violence and family court awareness, to crime prevention neighborhood meetings, to a mentoring program for at risk youth, to a police volunteer program. Shoemake is also in discussions with the Snohomish County Latin community on how the police department can better serve them, the mayor said.

The pandemic, Nelson said, spotlighted the importance of public space as a safe and inclusive gathering place. Addressing the community’s “robust discussions about streateries,” he reiterated the positive role they played in enabling people to socialize with each other. “Just imagine if we used a greater portion of our streets to improve connectivity for people walking, for planting landscapes and trees, and for creating new spaces where people can socialize and see their neighbors,” Nelson said, adding that “it is time we explore new public space strategies.”

Noting that “77% of our public space lies in our streets,” Nelson said it “is critical that we allocate space on streets to activities that serve environmental, social and health outcomes.” 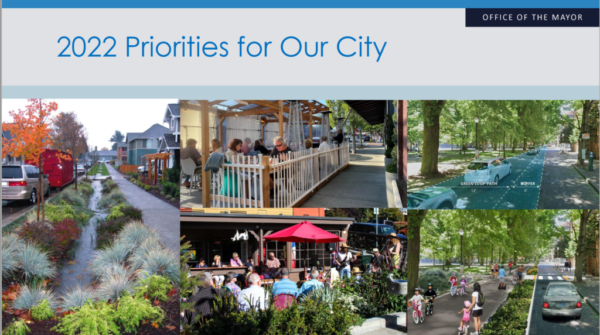 Nelson said he is introducing an initiative to “create a green street network that will map areas that are conducive for expansive landscape and that can treat stormwater and reduce flooding.” Calling local restaurants, retail shops and parks “social districts,” the mayor said it is important that the city leverage them “to afford the opportunity for people to stop and stay.

This new initiative will:

“We are going to take more steps on making Edmonds livable for all, build community connections to improve public safety, and evolve our streets to create new public spaces for our neighbors to gather,” Nelson concluded. “Edmonds is and will continue to be a caring and vibrant community because I know that regardless what the future may hold, we will move forward together.”