The Edmonds School Board of Directors, at its Jan. 25 regular business meeting, heard there is hope that absences and impacts from the latest wave of COVID-19 infections due to the omicron variant are possibly beginning to subside.

“It’s been a heavy lift since we came back from winter break: With omicron spiking across the U.S. and Washington state and the Edmonds School District being no different, we saw a tremendous spike in terms of the COVID cases on our campuses,” Superintendent Dr. Gustavo Balderas said. “But we’ve seen better attendance this week as we’ve worked to meet daily, multiple times as a staff, to look at attendance and so forth.”

He added that there is also reason to hope that trend continues. “From talking to my superintending colleagues from around the region, they’re seeing the same thing in their districts,” Balderas noted. “So we’re hoping that the spike has subsided and we’re heading in the right direction and will continue to move forward.”

Snohomish County has recently begun to see a decline in the total number of positive cases identified. Health officials and county leaders have said that they expect the surge of omicron infections to peak by the end of this month. The use of ICU beds associated with COVID-19 remains at high levels, however, and area hospitals are stretched thin.

“It’s not been an easy two years for kids, staff and community but they have been so resilient,” he said. Balderas thanked staff who have helped the district respond to staffing shortages and absences during the pandemic by substituting and filling in across a variety of roles to support campuses as needed. He noted the school district continues to lack paraeducators, teachers and other support staff including drivers, custodians, nutrition and office staff.

“It’s a team approach that everybody’s handling this situation and a team effort because we know it’s all hands on deck,” Balderas added about the continued efforts amid the ongoing COVID-19 pandemic. “Everybody has stepped up to really go into positions when asked and that has been greatly appreciated because the number-one goal is to really do the best we can for our kids – and we’ve done that.”

A few schools made temporary shifts to remote learning at different points in January, but, as of Tuesday night, all of the district’s buildings are currently open again.

It was noted that any recent closures of classrooms or campuses had only been temporary and those decisions were made by monitoring several different metrics and variables. Attendance rates of students and staff are reviewed by each site two to three times daily. Additional factors in any considerations regarding classroom and/or building closures include the number of positive COVID-19 cases identified over the last 14 days, the rate of transmission and vaccination rates. 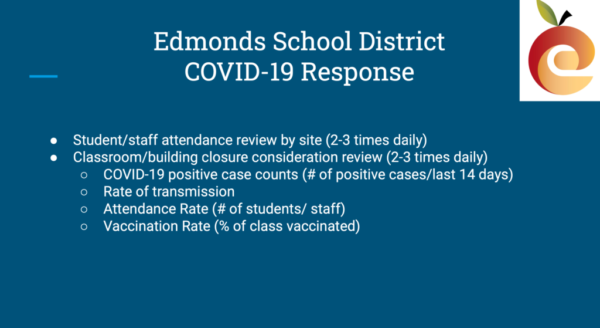 The school district reported a positive case rate of 1,142 over the last two weeks.

Following last week’s revision of guidelines provided to schools by the Snohomish Health District, case investigation and contact tracing efforts have been increasingly prioritized. In addition, students and staff who have tested positive for COVID-19 can now return to campus without providing a negative test after a five-day isolation period. In order to do so, their symptoms must be resolving or gone and they are required to be fever-free for at least 24 hours, without medication.

Balderas said the guidance from state and county health officials, which the district’s own policies follow, recently changed because, “The current variant (omicron), it comes quick and it leaves fast.” 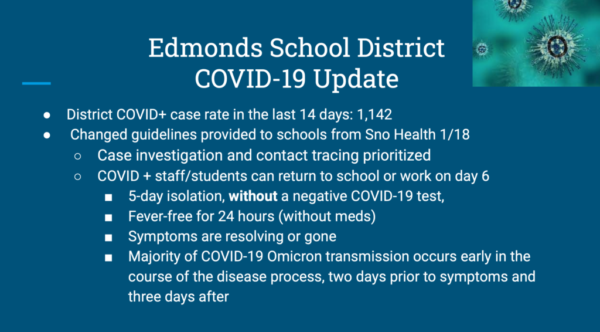 The school district sent out its updated COVID-19 policy to families on Jan. 19.

Assistant Superintendent Dana Geaslen noted that with the burden of increased case investigation and contact tracing efforts falling on schools, the district’s staff have had to adjust and perform a lot of work typically done by health agencies. 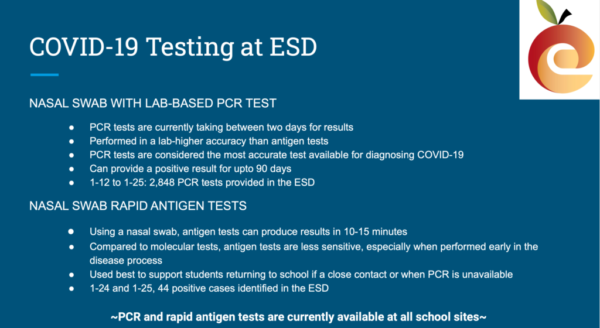 Edmonds School District is continuing to provide lab-based PCR tests for COVID-19 and it also recently received 10,000 rapid antigen tests it began administering this week. Both types of tests are currently available at all school sites. Use of the rapid antigen tests identified 44 positive cases in the district on Monday and Tuesday.

During public comments, middle school teacher Nasim Badrbigi expressed her frustration with the district’s communications and the way data is displayed on its COVID-19 dashboard.  “It does not reflect the actual population affected by COVID at any point in time,” she said, adding that she would like to see the district report its positive cases, absences due to sickness and quarantine data differently.

“The dashboard simply does not reflect, the strain that COVID currently has in our buildings,” she said, citing her own experiences with absence rates at College Place Middle School.

Badrbigi added that the district also should consider the equity of students’ access to educational materials for those who are at home due to illness or being isolated. She said that the added workload of having to suddenly create additional lessons and materials to be administered online, in addition to what is required for in-person classes, is a particular strain on staff. Badrbigi worried that students are falling behind while absent, saying it can then be difficult for them to catch up, and also noted that a grade of incomplete is no longer an option for teachers during the grading period.

“I ask the board to consider all of the students at home right now losing out on education,” she added. “I also ask that you have teacher representation on whatever committee decides what schools should go remote, because if you’re just getting cold, hard numbers that doesn’t reflect the strain on the school.”

Several students on the school board said that they recognized the increased efforts required of staff, particularly among teachers, during the pandemic and they were grateful for the return to in-person learning this school year. They appreciated the district prioritizing student safety, although some also noted feeling that communications could still be improved.

Balderas said that the district is continuing efforts to improve its dashboard and he recognized the need for consistent, clear communications to students, parents and staff – especially as guidelines from health officials change and policies are updated.

“I know that we are going to make mistakes as a district,” he noted. “I’ll be the first one to say that we make mistakes, but it’s with the best intentions that we make decisions and we’re not (always) going to get it right, but we get it right a lot of the times….We have people’s kids under our charge during school hours and we do the best we can and we’ll continue to do so.”

He added that even with higher rates of absences among students and staff during the recent wave of omicron infections the district remains focused on its ultimate mission. “I know that we’re not going to make people happy sometimes,” Balderas said. Amid the ongoing pandemic, “the (current) reality of the job is we’re doing the best we can to educate our kids and this is not fun” for district staff.

The board of directors all said they appreciated the district’s commitment to continuing to provide students with in-person learning.

“I do hope when I go into classrooms, I do see fun when teachers are teaching kids,” and that “kids are having a good time learning and doing the best they can and they’re still doing that – right now there’s just a higher level of absenteeism that we’re going to get through,” Balderas said. “So I think just hold on for a little bit longer and we’re almost there.”

In other business, board directors unanimously approved a resolution to waive more than $55,300 of outstanding fines and fees from the past several years that are uncollectible for inactive students who are now ages 21 and over. The district sends out email notices to a parent or guardian letting them know about the outstanding fines or fees. Following those efforts, the district’s business office determined that the remaining outstanding balance from years past is uncollectible. 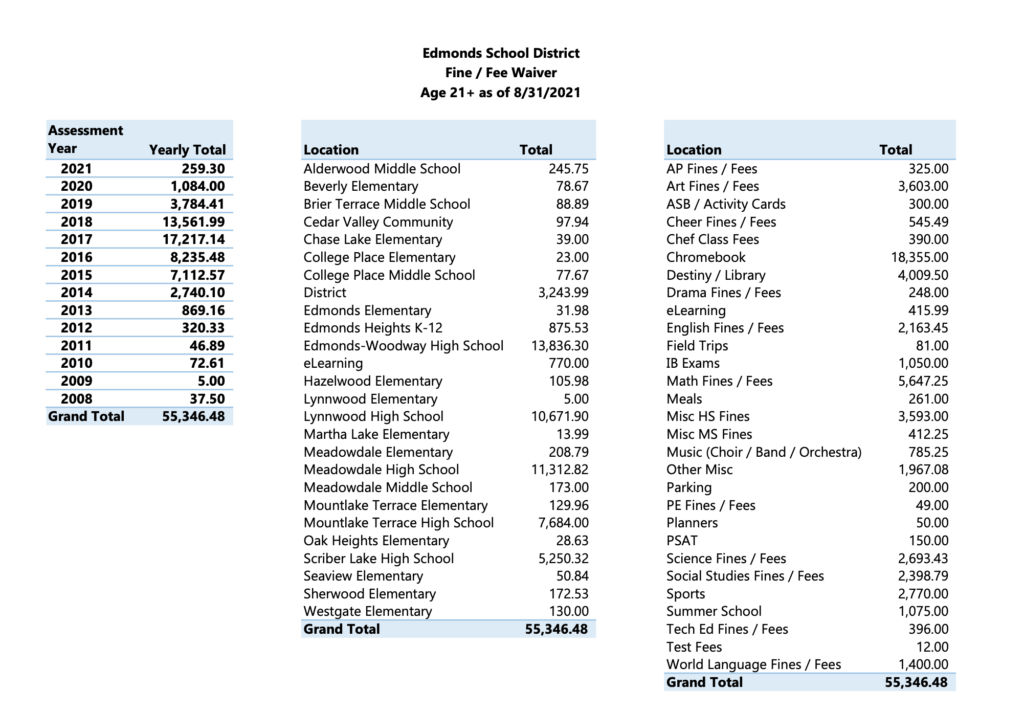 The school board also approved the acceptance of a completed public works contract for emergency HVAC replacement at Beverly Elementary School. Directors had previously approved an emergency declaration and resolution in October, which allowed the district to waive bidding requirements in order to have a contractor begin work immediately to replace the school’s existing HVAC hydronic piping system, which was deteriorated beyond repair.

Holmberg Company was already onsite at that time and it was determined to be in the best interest of the district to have the contractor begin performing the emergency work immediately. The project was then completed in mid-November and the final contract amount approved Tuesday night was slightly more than $249,500.