During my teaching career, teachers were expected to operate under the mantra Failure Is Not an Option. This always struck me as flawed because how do we learn if we don’t fail? Writers fail, and fail often, yet our failures make us better.

Right now, I’m teaching myself screenwriting in order to adapt portions of my 2016 debut novel, Breakfast With Neruda, into a pilot for a series.

A former student of mine is a production assistant in Hollywood, and he and I are working on a pitch portfolio. A screenplay isn’t a necessary component for the portfolio because if it’s picked up, a studio will hire a qualified screenwriter, but I figure it won’t hurt me to adapt my sory. It’s like cross training. where I’m using different writing muscles. And I’m likely to fail.

Viewers often complain about how differences between the film and book versions of a story. A book is read for a different purpose, where a reader becomes actively involved in a story by becoming part of the narrative and creating a world inside her head.

Film is a visual and image-driven medium, so there’s no room for long, drawn-out passages in a script. The screen “narrative” is told in pictures where emotions are expressed with gestures, expressions and dialogue. Moviegoers expect the story to be shown to them.

A 300-page (or more) story must move forward in two hours, and scripts are approximately only 120 pages, so unless it’s being adapted for a miniseries, much will be lost in translation.

Another difference is the film version sometimes starts in a different place. In my novel, the reader gets to slow walk into the story by meeting Michael, the main character, and Earl, one of the secondary characters. The scene is dialogue driven, and it works for a reader. But a film needs to attract attention right away, so I begin my script with a storm from the night before. Yes, it’s cheesy to begin a novel with “it was a dark and stormy night,’” yet in a film, it grabs the viewer’s attention because it uses multiple senses.

Going through my own novel with a fine-tooth comb is like hearing and seeing myself on film; it makes me cringe. My critical self wants to yell, how did this thing even get published? but the rational side reminds me that many strangers gave my novel positive reviews.

As I adapt, I’m revising the story and discovering new things about my characters, yet the essence of the story is the same.

One of my favorite film adaptions is Frederik Backman’s A Man Called Ove. It tells the crux of the story, yet differently. There are scenes in the film not included in the book, but they work to move the story forward. When Backman was in Seattle (pre-pandemic) I asked him why he didn’t write the screenplay, and he replied he wasn’t a screenwriter, and had to trust the experts. He’s happy with the film version.

In a script, language must be tight, using precise verbs and punchy dialogue, with no long-drawn-out narrative. Because film is collaborative, a director, not the writer, has more influence on how the scenes are presented. The screenwriter can supply cues, such as how Laura Kemp describes a fire chief in her award-winning script, Burn Pattern, as “pleasantly craggy with the earnestness of an Eagle Scout,” but it’s ultimately up to an actor or director’s interpretation.

Formatting a screenplay is like learning a foreign language. I’m used to double-spaced, 12-point Times New Roman or Calibri. A script uses Courier New, making the pages look typewritten. It forces me to slow down, and in doing so, I think more carefully about word choice. 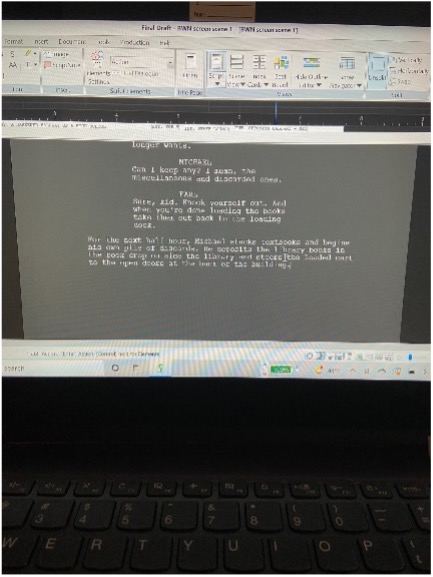 Prior to computers, writing scripts must have been tedious. Thankfully, there are programs out there to help with formatting. My screenwriting friends have all agreed Final Draft is the industry standard. It takes the guess work out of formatting so the screenwriter can focus on story. One of the features I like is the night mode (seen above) which helps reduce eye strain.

I’m not flying totally blind. In 2018, I had done a free MOOC through open university and am now taking Aaron Sorkin’s screenwriting workshop on MasterClass.

In addition, I’m reading a recommended text, The Screenwriter’s Bible 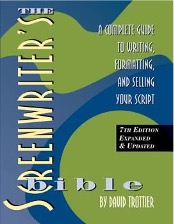 I watch the extras on DVDs of movies, particularly if there are author commentaries. I also read scripts that are bothsimilar and unlike mine.

Chances are my script will be bad and I may fail at screenwriting, yet cross training will make me a better writer. And one never knows, but a producer may fall in love with it. Just in case, I’ve cleared space on my bookshelves for my Emmy. 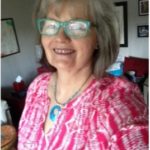 Laura Moe is the author of three novels and is board president of EPIC Group Writers. See EPIC’s events page for upcoming workshops. She is currently letting the draft of her fourth novel rest as she tackles screen craft.