After weeks of consideration, the Edmonds City Council Tuesday night got through the remainder of the 34 amendments proposed to the already-approved 2022 city budget, passing two by a supermajority vote of councilmembers.

The amendments were mostly made by councilmembers who have held that the 2022 budget wasn’t thoroughly vetted prior to its passage in November 2021. To be included in a final ordinance, amendments needed to receive a 5-2 supermajority vote, which is required to make changes to the existing budget.

One of those amendments approved Tuesday night — passed 5-2 with Councilmembers Laura Johnson and Susan Paine opposed — allocates $34,000 for grant matching funds to complete the conceptual design for the 4th Avenue Cultural Corridor. The approved amendment also calls for reimbursing the council’s contingency fund for the $10,000 it allocated last week toward that $34,000 design.

The idea behind the corridor — which covers the section of 4th Avenue stretching from Main Street to the Edmonds Center for the Arts on Daley Street — is to provide a space for cultural events and street artists that also feature art elements and a pocket park.

The corridor has been under discussion since 2004, and it was the centerpiece of the city’s successful application to become the state’s first Creative District. Supporters have expressed worries that if the city does not take action on the corridor project, Edmonds could lose its Creative District designation when it comes up for recertification. However, Councilmember Laura Johnson reiterated her concern Tuesday night about the council spending money for a downtown project when other areas of Edmonds are ignored — especially as city begins reviewing new initiatives through an equity lens.

The other budget amendment that passed Tuesday hadn’t been included in the original list of 34, but was proposed by Councilmember Laura Johnson. Approved by a 6-0 vote (Council President Vivian Olson abstaining), the amendment calls for the city to hire a permanent senior planner with code drafting experience to replace the short-term code writer position that had been filled by Eric Engmann, who left the city last week. Councilmembers had a lengthy discussion about whether they should proceed with a permanent position or just find someone to fill the three-year position that Engmann vacated, or even have the position go through a council committee for further vetting.

“Let’s just get on with it and not delay it any longer,” Paine said prior to the vote.

The final two amendments had been proposed by Councilmember Will Chen. They didn’t move forward, as most councilmembers agreed they should be further discussed in council committees — and then possibly be added as first-quarter budget amendments. The first item called for $65,000 to study the feasibility of moving Edmonds’ police station and/or city hall to Highway 99, but that was defeated on a 1-6 vote (Chen supporting). The second was to spend $150,000 for street lights in the Lake Ballinger neighborhood, and that failed on a 2-5 vote (Chen and Olson voting for).

In other business, the council received the 2021 annual report from South County Fire, which provides fire and emergency medical services for Edmonds on a contract basis. As they do each year, fire officials summarized the range of activities provided in addition to emergency response. These range from public education  — conducted online due to the COVID-19 pandemic — to its Community Resource Paramedic program, which serves frequent users of the 911 system in an effort to proactively address issues and reduce those types of calls.

Fire officials also shared with councilmembers the annual statistics for services provided, including those related to response times. This is calculated from when dispatchers receive a call to when units arrive on the scene. South County Fire’s contract calls for crews arriving within eight minutes or less, and in 2021 they met that standard 68% of the time. The average response time on 90% of the calls was 9:59. Both measures were significantly improved over 2020, when extra time was allotted for dispatchers to determine whether calls involved a COVID-19 patient. 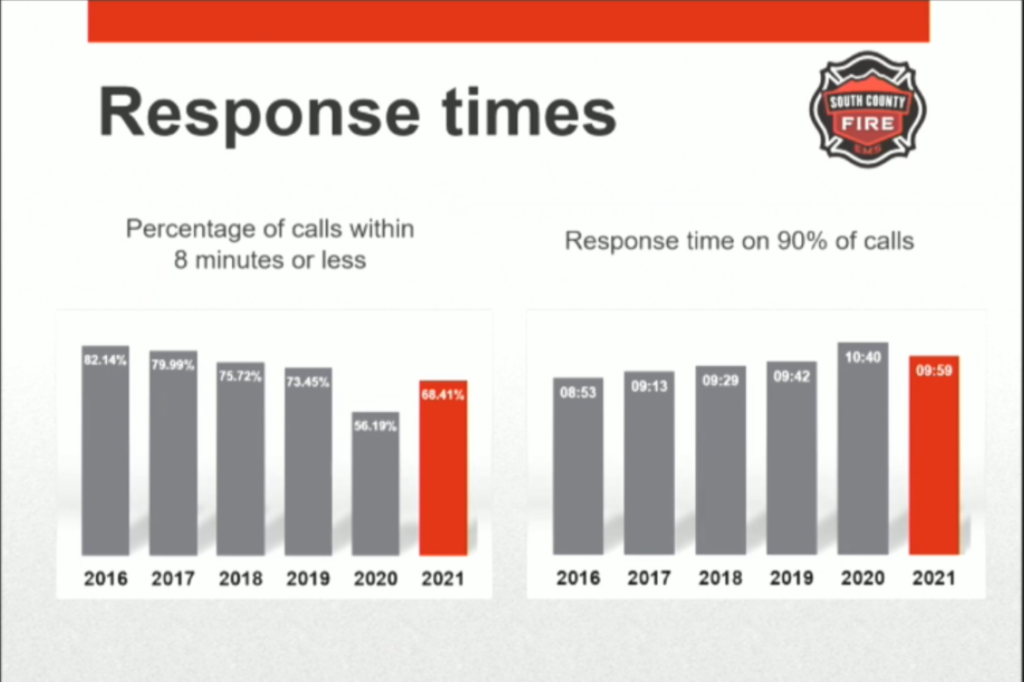 Fire officials noted that the response times are expected to drop when South County Fire adds another 24-hour, two-person unit to its staffing. This will occur March 1, and is the result of a contract amendment that the council approved in January — at a cost of $1.5 million — to address service imbalances.

Under the contract, balance is achieved when those two amounts of time are within 10% of one another. However, 2021 South County Fire data shows that the neighboring cities are responding into Edmonds significantly more often than Edmonds units are responding into neighboring cities like Lynnwood and Mountlake Terrace. For example, the NUUF from Mountlake Terrace into Edmonds is 111% and Lynnwood into Edmonds is 253%. Those numbers would have to be at 110% to be considered in balance, and being out of balance triggers a reopening of the contract and brings the parties back to the bargaining table.

During a discussion with councilmembers following the presentation, Fire Chief Thad Hovis noted that the agency is also looking at future needs for new fire stations, including the possibility of adding one in the area of 215th and Highway 99 in Edmonds.

– Approved by a 6-0 vote (Councilmember Kristiana Johnson abstaining) a salary adjustment to the assistant police chief position. The change will ensure there is a wider differential between the salaries of the city’s assistant chiefs, its newly created commander positions, and its sergeants, which is typical of surrounding cities.

– Unanimously approved a resolution waiving competitive bidding requirements for replacement of electrical equipment at the city’s wastewater treatment plant. The plant’s equipment was damaged during weather-related flooding in early January.

– Due to the lateness of the hour, postponed reviewing a proposal to reinstate the Edmonds Salary Commission, which was disbanded in June 2021.