Updated with additional details on the moratorium.

The item was added at the last minute to the council’s business meeting agenda Tuesday, and there was no explanation given for the action. However, in a press release issued late Tuesday night, the City of Edmonds said it “has realized that there are gaps in our existing multifamily designs standards in the downtown BD2 zones that would inhibit positive design outcomes, such as neighborhood compatibility and green space amenities.”

The city said it has already begun working to address development and design standards for stand-alone multifamily development in the multiple residential (RM) and BD zoning districts, but said it does not anticipated that work will be completed before the end of the year. Such guidelines will include building design, setbacks and neighborhood compatibility, the news release said.

The council’s action Tuesday night places a two-month emergency moratorium on the acceptance of building permit applications for any property in the BD2 zone that does not have a street front designation, as defined in the Edmonds Development Code, the city said. (You can find that code definition here.)

The emergency moratorium will be in effect for two months on new building permits for BD2-zoned lots until the City of Edmonds adopts interim development regulations. A public hearing on the ordinance is scheduled for April 5.

A person with knowledge of the situation, who asked to remain anonymous, confirmed that the council’s action is related to a proposal for a 24-unit apartment building at 605/611 Main Street in the BD2 zone that has come under public scrutiny.

“That building pushed them (the council) to do the moratorium so they could get some of the (design) standards in place,” the source said.

Also on Tuesday, the council once again attempted — during a special meeting at 4 p.m. and again during its 7 p.m. business meeting — to plow through proposed amendments to the city’s already-approved 2022 budget. While councilmembers made some headway, they voted 5-2 (Councilmembers Laura Johnson and Susan Paine opposed) to continue Tuesday night’s meeting to Thursday, starting at 7 p.m., for the purpose of working through more amendments.

The nearly three dozen amendments were mostly proposed by councilmembers who have said they don’t believe the 2022 budget was thoroughly vetted prior to its passage in November 2021. Last week, the council took action on two amendments and started a discussion on a third — whether to remove $200,000 already allocated to the human services division for 2022. In Tuesday afternoon’s meeting, the council approved an amended proposal by Council President Vivian Olson to move the $200,000 from the human services fund to the city’s homeless fund. The goal is to ensure that the money will be used in partnership with other jurisdictions to create shelter for those who are unhoused in South Snohomish County — a priority mentioned last week by city staff. Councilmembers also decided Tuesday afternoon not to move forward with other amendments after hearing details from city staff. During the evening meeting, the council rejected by a 2-5 vote (Councilmembers Olson and K. Johnson voting yes) an amendment to remove a $100,000 budget allocation for facilities maintenance and instead consider the request further in a council committee meeting.

– Approved by a 5-2 vote a new proposal —  introduced Tuesday night — to allocate $10,000 from the city council’s contingency fund to be used toward $34,000 that will match a state grant to complete design for the 4th Avenue Cultural Corridor project. The idea behind the corridor — which covers the section of 4th Avenue stretching from Main Street to the Edmonds Center for the Arts on Daley Street — is to provide a space for cultural events and street artists that also feature art elements and a pocket park.

The corridor has been under discussion since 2004, and it was the centerpiece of the city’s successful application to become the state’s first Creative District. Supporters have expressed worries that if the city does not take action on the corridor project, Edmonds could lose its Creative District designation when it comes up for recertification. However, some councilmembers have been questioning whether it is wise to spend a large amount of money (the total project is estimated to cost about $8 million) for a downtown project when other areas of Edmonds are ignored — especially as the city emphasizes the importance of reviewing new initiatives through an equity lens.

That issue came up again on Tuesday night, with Councilmember Susan Paine stating that while she’s proud that Edmonds was named the state’s first Creative District, she’s troubled by the exclusionary nature of it.

Under the Creative District program, the city had to meet state’s application process requirements for a geographically defined area where art, cultural, social, and economic activity takes place. Both Paine and Councilmember Laura Johnson talked about the importance of ensuring that other parts of Edmonds were included in the city’s creative efforts.

“Instead of focusing on the downtown area, let’s enhance and promote arts and culture in our traditionally historically underrepresented neighborhoods,” Johnson said.

Councilmember Will Chen, who lives and works in the Highway 99 neighborhood, said that while he’s committed to focusing on investments in his neighborhood, he supports allocating money for the 4th Avenue Cultural Corridor, adding: “I don’t think we need to throw away something that’s good for our city.” Chen also said he believed all of the $34,000 matching grant amount (some was going to be contributed by the Edmonds Center for the Arts) should come from the city’s general fund, through a budget amendment. He made a substitute motion to that effect but withdrew it after learning that such a move could cause a delay in receiving funds, a problem since the grant application is imminent. Administrative Services Director Turley clarified that the money could be reimbursed to the council contingency fund later, and the council voted to approve the original $10,000 allocation.

– Heard a report from staff on the likely timing for the council’s return to hybrid in-person virtual meetings. Administrative Services Director Dave Turley explained that the city has ordered the necessary hardware and expects it to arrive — and have needed staff in place — by March 15. Assuming a week of testing to ensure the system works, that would put the official start of hybrid meetings, located in the council chamber, on March 22.

Meetings would be broadcast via Zoom and the chamber will be set up for elected officials to attend in person, but they are also welcome to participate remotely, Turley said. The public can watch meetings in person, via the livestream on the city’s website and on cable television, and via Zoom on their computer or phone. Participation in the Zoom will only be during the time of public comment or a public hearing, Turley added. “They won’t be able to remain in the Zoom room for the entire meeting.”

There are risks involved with using the Zoom format, he said. “Zoom bombs do still happen…and might shut the meeting down for five or 10 seconds while we remove a participant,” he explained.  Staff recommends that Zoom participants make comments via voice only, since video carries the added possibility of inappropriate visual images being displayed.

Turley asked for council direction on several outstanding issues: Whether there should be requirements for masks, proof of vaccination and social distancing in the council chambers, and what type of security should be present. Councilmembers agreed it would be best to follow whatever state or county health guidelines are in place at the time that the hybrid meetings start, and that security should be the same as what existed during previous in-person meetings.

– Unanimously approved the emergency adoption — meaning it is effective immediately — of a change to the city’s extreme risk protection statute, allowing those who violate the statute to be charged through Edmonds Municipal Court. Such an order can be issued by Superior Court judges only after a family member or law enforcement agency petitions the court to have someone’s rights to possess firearms or dangerous weapons taken away. The orders are for extreme risk situations — known violent people or those whom police have documented are planning a violent act.

Acting Assistant Police Chief Shane Hawley explained to the council that Edmonds officers had arrested a shoplifting suspect who was in possession of a firearm, violating an extreme risk protection order against him. Police then discovered they couldn’t charge the suspect with that violation in municipal court, prompting the request for the change. 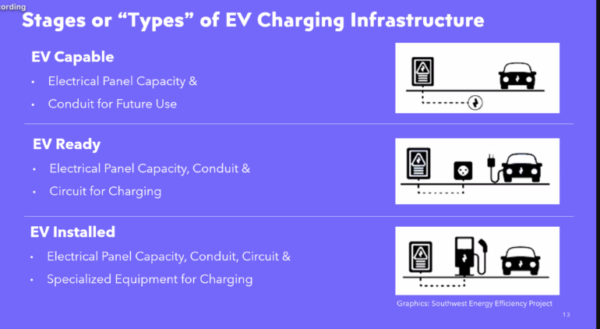 The proposed standards also define the percentages of parking spaces that must accommodate each type. They would apply to all new and significantly altered single-and multi-family development.

Engmann said it is about five times cheaper for developers to install EV components during new construction than adding them later. Councilmember Neil Tibbott asked what builders think about the new regulations and Engmann replied that it’s becoming more common for builders to include EV-ready parking spaces as part of new construction.

– Approved by a 5-0 vote wtih two abstentions (Councilmembers Olson and Chen) acceptance of a $119,645 Washington State Department of Commerce grant to install a 100kW solar plant on the Public Safety Complex West roof. The grant award of $119,645 amounts to 25-30% of the total cost of the proposed project, estimated at $469,645. Olson and Chen said they wondered whether the city should be considering a project on the Public Safety Complex when the council is starting to explore the possibility of moving the city’s police headquarters closer to Highway 99. Olson suggested that perhaps a better choice would be the city’s public works building, located off 212th Street Southwest, but staff replied that the public works facility is a pre-engineered kit building that couldn’t accommodate the roof load — and as such would be unsuitable for a solar project.

Thursday night’s continued meeting on budget amendments will be held virtually using the Zoom meeting platform. To join, view or listen to the Edmonds City Council mMeeting, paste the following into a web browser using a computer or smart phone:
https://zoom.us/j/95798484261