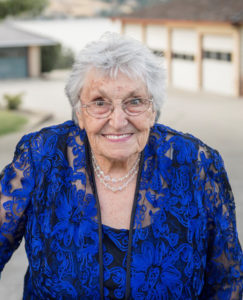 Helen was born to the late Theresa Henricka Ettlin and Lee Baerny in Derringer, Washington on January 26, 1929. She was the third child in a family of seven.

Her father Lee was born in Deiting, Switzerland, and he immigrated to Washington where he and another Swiss farm­hand purchased their own dairy farm in Derringer, now Sumner, Washington.

Growing up, Helen helped out on the family-owned dairy farm and at a young age she became passionate about the Swiss community. Helen met Lloyd Allan Gilbertson in her twenties at the Spanish Castle Dance Hall in Seattle. They married shortly after at the Holy Family church rec­tory, and together raised three children, Scott, Valerie, and Greg.

Helen was a devout Catholic. As a mother, she was patient, compassionate, kind and held the family together through her faith and grace.

As she watched her children grow up, her biggest pride and joy was becoming a grandmother. She poured her en­tire heart into her family and lit up talking about her grand­chil­dren’s baptisms, sport games, dance recitals, gradua­tions, and weddings.

Helen is survived by her two sons, Scott Gilbertson and wife Denise of Edmonds, and Greg Gilbertson and wife Elena of Snohomish; and daughter Valerie and husband Tim Anderson of Jacksonville FL; grandchildren: Danielle, Garrett, Parker, Gabrielle and Alexis; and her sister Leona Reis of Federal Way.

A Viewing will be held at 11:45 a.m. Monday, Feb. 28 with Funeral Mass beginning 12:45 p.m. at Holy Rosary Catholic Church, 630 – 7th Avenue N, Edmonds, WA.  There will be a Private Family Graveside at Holyrood Cemetery in Shoreline, WA.