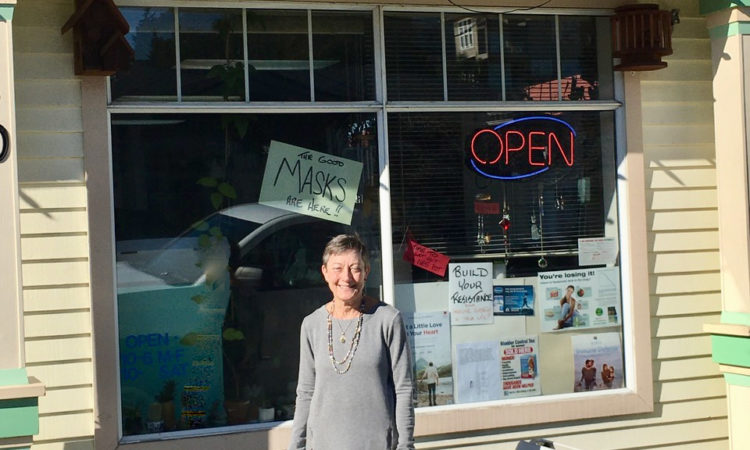 Justin Reeder likes to help people. It got her into the health food industry 40 years ago in Seattle, and 25 years ago she opened her own store in downtown Edmonds.
“My native philosophy is that we are all here to love and support one another. So that’s what I do,” she said.
When she first opened Edmonds Vitamins & Herbs at 420 5th Ave. S., “It was so small, just 200 square feet. I could only get two customers in at a time before you got claustrophobic!”
“It’s not a money-making business,” she added. “It’s a people business. So, I sold my car, took extra jobs to make money,” and she kept working.
Year after year, Reeder helps the folks who walk through her door. Many just don’t know what to do about their problems, but want to try a natural approach.
“There are so many reasons people’s health gets out of balance,” she said. “They don’t know how to straighten out their diets and their lives. Often they don’t need to take so much stuff. I’ve talked people out of taking things as much as I’ve sold them!”
Reeder said her job requires a lot of listening. “People’s problems are never caused by just one thing,” she said.  “A woman came in one day with headaches. She could have taken a drug, but the more we talked, the more we learned. Her husband’s snoring kept her up at night  and her cat’s dander bothered her. Eventually, I realized she needed earplugs and allergy support.”
Five years ago, on Reeder’s 20th anniversary, she said that her customers have become her friends. Now, it’s even more emotional. “The pandemic was hard on my elderly customers. It’s so sad. At one point, Paktia Pharmacy, Arista Wine Cellars and my shop were the only businesses allowed to be open.”
Edmonds has definitely changed, she said, “because it is younger.” She credits employee Carolyn Hart-Mylie for being able to relate to that demographic. “She was a teacher and a lactation consultant so she knows how to relate to Edmonds’ younger families,” Reeder said.
And employee Sidney Cohen, who started as a customer 23 years ago, “is a great help with the male clientele,” she added.
Younger customers tend to purchase online, she said, and so small businesses are constantly undercut by the internet and chain stores. While times have changed, Edmonds Vitamins & Herbs is still here and Reeder is ready to talk about good health to those who walk through the door.
“When I think about retiring, new customers come in the door or someone tells me how I’ve helped them. I still get to help people,” she said. “My customers are now multi-generational and I am so grateful for their continued trust and support.”
— By Mauri Shuler