Pick the hottest day of summer
and climb into the mountains
as high as your pounding heart allows.
When you arrive at the lake
even the sight of the liquid jade will begin
to quench some longing inside.
The snow-fed waters are so clear trout waggle languidly.
Don’t be fooled– they’ll dart toward shadow if you wave a hand.
All along the shore bumblebees and deerflies patrol
in buzzes & discordant hums amplified by the mountain cirque.
Look around. It’s okay– no one else is here.
The nearby mines never panned out.
They were abandoned a century ago.
Strip down to nothing.
Let the rippling distortions of the water
protect your modesty.

Now trout swirl around your legs
in a downward vortex.
The cold stings for a moment
then a kind of stupid numbness
creeps into your fingers and toes.
Your crawl stroke looks a little drunk
to the hikers who’ve just arrived.
Take care–it’s easy to swim too deep.
The old miners used to after days in darkness.
They bathed in a cold, white heat.
The silver they sought the sun refined in them.
Panicked voices on the shore abstract
as you sink beyond the reach
of any outstretched arm or branch
Your face, the rangers will say,
when the divers bring you to the surface,
appears content with the notion
the self is an illusion.

In the moonlessness at water’s edge
the fire and phosphorescence
of sea and star meld into a shimmering taffeta.
In the morning we will be crowding
along the surf, the foam tickling our toes.
Then the world will pull away.
Let’s see if we can’t skip the tsunami
when it thunders above us like a crowning cliff.
You think I believe in the impossible
with a gargoyle on my shoulder
and a nose ring through a seven-eyed lamb
who refuses to bleat.
Imagine Bernoulli and me sailing
on the rising whirlwind
and the hissing vortex
of the crashing waves
Our jackets pull like bat wings
as we slide up a trillion
molecules of heavy air.
Really, if you pull each moment
like taffy you can string a lyre to sing the harmonies
of every heavenly sphere
or lash a rope ladder as long as forever
to climb down again when this is all over.
Terror plays with framespeed lingering the pain.
Let’s run it in real time and skip the tsunami.

Magic and medicine converge
somewhere beyond the Bitterroot Range
like the confluence of two rivers– one muddy, the other green.
In the pristine darkness stars fall
one after another only to land just beyond the horizon.
Let’s walk hand in hand across the strewn field
among the prickly pears and the black-eyed Susans
where the air is pure as spring water
and the medicine wheel turns
so slowly it’s imperceptible to people trapped in time the way we are.
We’ll find what’s fallen, what sparked in an arc
lies on the ground dark, dense with a rind of fired night
veined by its trajectory to this very place.
All the wishes we ever cast evaporated
as it cooled to common chondrite.
Somewhere growing up in Minnesota
another wheel turned in a prairie wind
out of round and out of prayer
and a cancer slipped shyly into your body.
You take the drive back home from the coast
in smaller chunks now.
We used to drive day and night and day again,
stopping only for gas.
All the fog of the lowlands has lifted–
the fog of anesthesia and chemo.
Here under the lucid sky
you talk of remission cautiously.
I want a pilgrimage to the miraculous
to call down the eagles and lift up the raven pleas
deep from beyond our understanding.
From the Kuiper distances
a rock began a journey
to the rock we live on.
Life and love,
twin happy mistakes
where briefly we nested
in a gnarled pine,
rooted deep enough to drink
from an artesian well,
so our fragmentary descendants,
generations from now,
might trace back their life to us.
Fires only seed the future. 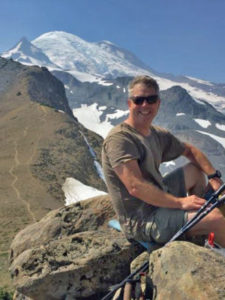 James Backstrom grew up exploring the forests and mountains of the Pacific Northwest. He is a proud charter member of EPIC poetry workshop that meets the second Tuesday every month at the Edmonds Library. His poems have appeared in  Spindrift, Yours Truly, The English Journal, Poetry Seattle, and other magazines as well as In the anthology, Sounding on The Salish Sea.