State legislation sponsored by our 21st District Representatives Strom Peterson and Cindy Ryu, allowing a three-fold expansion of density in single-family neighborhoods using market rate accessory dwelling units (both attached and detached), narrowly passed the Washington State House last week and is being debated in the Washington State Senate. A public hearing will be held at 10:30 a.m. this Wednesday, Feb. 23 in the Senate Committee on Housing & Local Government. If you would like to provide input, please go to: CSI (wa.gov)

You can build an ADU in Edmonds now. In certain cases, a detached ADU can be built by getting a conditional use permit. In our current code, ADUs can be “attached” to the existing home with a breezeway (max. 10 feet), or they can be in a daylight basement within the home. Maximum size is 800 square feet, or no more than 40% of the livable space of the existing home.

Edmonds’ code requires that the property owner sign an affidavit that affirms that the owner occupies either the main building or the ADU more than six months of the year. In addition, the property owner is allowed to rent the unit out to “provide the opportunity for homeowners to gain the extra income necessary to help meet the rising costs of home ownership” (20.21.000 Purpose).

ESHB 1660 instead, will mandate at the state level cities like Edmonds, in most situations, cannot impose any owner occupancy requirements on any house or dwelling unit on a lot containing an accessory dwelling unit.

This bill forces local cities to not be able to impose a maximum floor area limit on the size of less than:

It is important how livable floor area is defined for these dwelling units – in Seattle the garage, basement, and any storage space are exempt from the total square foot limit, thereby potentially allowing these to be the size of a two- to three-story townhouse in a neighbor’s yard. The only maximum limit referenced in this bill is that an attached unit may not be more than 50% of the square footage of the principal unit.

Here is an example: the house in orange is a detached ADU in North Seattle’s Carkeek Park view neighborhood. 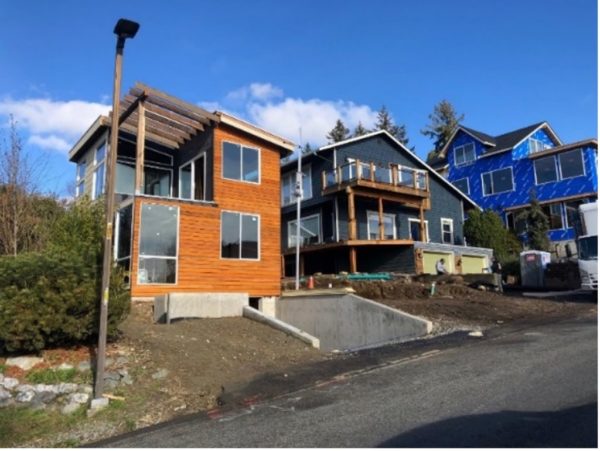 The more likely scenario if this bill is passed, given how expensive construction is, a homeowner could construct both accessory dwelling units, then move and rent out all three residences, as would be allowed in this bill.  Or a developer could buy the property, tear down the existing house (including green space) and rebuild as three units, renting or re-selling at a huge profit. Again, none of it will be affordable.

A single-housed neighborhood will potentially become a multifamily rental investment profit tool for developers and outside money.

This opens the door for a three-fold increase in density. When you buy your house, you don’t expect to have an 850-square-foot house or two in your neighbor’s backyard that now blocks views, removes green space and privacy. This can transfer your value to your neighbor’s property without any recourse, especially as Edmonds is a view town and is, as one resident put it “the town of a thousand gardens…”

This bill will increase impervious surface coverage, environmental damage, rooflines and drainage off each structure, as well as the amount of stormwater runoff per lot. Current infrastructure in Edmonds cannot handle such increases, as we already have so much urban flooding, and it would mean that rain gardens or underground detention tanks are needed to handle additional stormwater runoff.  This will increase the cost of housing as these are very expensive and the added infrastructure burden will result in increased taxes for current homeowners.

This one-size-fits-all-cities approach does not look at why local municipalities have their own existing codes, site development standards, infrastructure needs, or environmental concerns, setting the stage for multiple areas of conflict in the future. See this example from San Diego: San Diego Granny Flat Fight – NBC 7 San Diego (nbcsandiego.com).

As this is moving along for final passage in the Senate by March 10, please act now.  There are many opportunities to make your voices heard and please pass this information along as it is a statewide bill:

If you wish to contact our local senators individually:

You can find the current Edmonds ADU code here.

Dr. Michelle Dotsch is president of The Alliance of Citizens for Edmonds (ACE).

3 Replies to “Reader view: Have your say about ADU legislation moving through state Legislature”