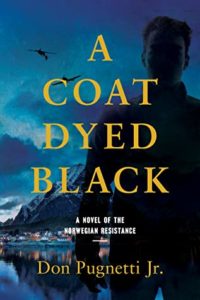 A Coat Dyed Black: A Novel of the Norwegian Resistance, by Don Pugnetti Jr.

A powerful story. A Coat Dyed Black is a tremendous tribute that doesn’t just tug at the heart, it echoes through the soul. What a sensitive and harrowing view of human nature, fighting against the odds in a manmade disaster. Bjorn Erliksen is a young man with a peaceful, idyllic life ahead of him, farming land he inherited from his father on Norway’s west coast. He didn’t know that another world war would erupt all over his beautiful country. As the Nazis take over every aspect of life and demand support from civilians, including taking their farm animals and harvests, fear and force pit neighbor against neighbor and trust puts all life at risk.

Norway fights back, and Bjorn joins up with the untrained, courageous young troops. They quickly lose. Having been part of the Resistance is not something to show, so Bjorn dyes his army green military coat black, to hide it and to keep it, just as he hides his continuing resistance. Bjorn and many of those who fought are haunted by the question, why did we survive when others didn’t?

His continuing underground fight is inspired for his loved ones, and also for the many brave, nameless defenders who died fighting the invaders. Bjorn enters the dangerous life of a secret Norwegian commando. Their training is intense, and dangerous. Their assignments are critical, deadly and meant to find any and all ways to hinder or stop the Nazi efforts. Complacency, carelessness and bad decisions result in torture and possibly death for the secret combatants and all associated with them. Bjorn had no idea that would include his high school sweetheart, the love of his life, as the Resistance reunites them now several years later.

Author Don Pugnetti Jr. writes a story of war that brings the reader into the conflict. Not only into the battle, but into the soul’s torment for what is lost, and debates over what they know they must do but never imagined they would. The triumphs and the desperate struggles of these characters are so relatable. They are you, your brother, your sister, your friends, defending themselves against an ultimate force that’s ready to destroy anything in their way on their thirst for power. You’ll hope for these characters, cry for them, cheer for them.

The true history of these brave Norwegians is well researched. The facts and setting, events and people that inspired this incredible book are expertly and artfully woven throughout this fictional account. It reads as a page-turner story, based on the most fascinating historic facts, people and events. The Coat Dyed Black iscarried by a character who sees the best in the human race, and the worst, and is impacted by it all for a lifetime.