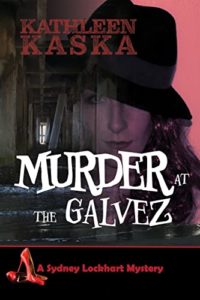 Murder At The Galvez: A Sydney Lockhart Mystery, by Kathleen Kaska.

Reporter Sydney Lockhart travels back to Galvesto, Texas to cover a story about a conference on the Pelican Island development. It’s an emotional topic, but Sydney’s biggest concern is avoiding the family drama surrounding her parents who live nearby, as they plan their upcoming wedding. That’s a mystery of its own.

Sydney checks into the Galvez hotel, an iconic and historic place where Sydney’s grandfather worked, and 18 years ago was murdered. Haunted by the unsolved murder and the family history at the Galvez, Sydney is also unnerved by mysterious phone messages telling her to get out. The reporting assignment takes an unexpected turn when the keynote speaker goes missing, and a surprise is found in the trunk of Sydney’s car, a dead body. Sydney has no explanation.

Sydney must act fast to prove her innocence and to defend herself from anonymous threats. She has an assortment of suspects to investigate. Following the clues, is she crazy to think the current mystery is connected to her grandfather’s death years ago? Is this intrigue years in the making? When Sydney calls on her cousin for help, the results are unpredictable. Fortunately, both of them have a great sense of humor, which delights readers as much as their antics discovering clues.

This book, Murder At The Galvez, is author Kathleen Kaska’s third in the Sydney Lockhart series. Sydney is a dynamic character with a sarcasm and life outlook that bites and is often revealing. Juggling her extended family’s reckless demands, against dire threats, Sydney is a woman of action, which makes this book a fast and fascinating, fun read. Her cousin Rachel is one of my favorites in the cast, and all the suspects have their own perspectives and motives, revealed in tantalizing ways. The star of the story is the historic Galvez, and its secrets.