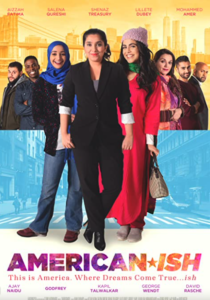 Americanish, a Muslim rom-com directed by an American Muslim woman, is the featured movie in the Edmonds Diversity Film Series at noon this Saturday, March 19 at the Edmonds Theater.

The movie invites viewers into the homes and lives of three marriage-aged South Asian women as they navigate the often-turbulent waters of romance, culture, career and family, delving into the complexity of both honoring and breaking from cultural traditions. The movie is rated for ages 13-plus.

This is the fifth film in the Edmonds Diversity Film Series’ sixth season. Screenings are offered free to the public and are scheduled for the third Saturdays of the month. Each screening presents a film, or films, related to different topics or groups representing diverse populations and experiences. After each screening there is a brief opportunity for friendly comment and dialogue.

The series finishes on April 16 with This Changes Everything, an investigative look and analysis of the under-representation of women in Hollywood, featuring accounts from well-known actors, executives and artists in the industry. The film is designed for mature audiences.

More detailed information about the films, including full synopses and movie trailers, is available at diversity.edmondswa.gov and I Am Edmonds on Facebook. All  are screened at noon at the Edmonds Theater, 415 Main Street, an ADA-accessible facility.