During a busy Tuesday night meeting, the Edmonds City Council approved an ordinance amending the already-approved 2022 city budget, reinstated the city’s  salary commission, heard a preliminary update on homelessness in Edmonds and received an assessment of the city’s tree canopy. The council also approved a $298,000 change order associated with stormwater mitigation for Civic Park construction.

The homelessness assessment, conducted by Edmonds-based Koné Consulting, updated the report presented to the council in 2019. Presenter Alicia Koné, herself an Edmonds resident, stressed that the updated report includes preliminary conclusions and recommendations and will be followed by a full report in mid-March.

Perhaps the biggest takeaway: While the number of unhoused individuals in Edmonds has gone down over the past few years, the proportion of low-income people experiencing homelessness has increased, especially amongst older adults.

In her 2019 report, Koné reported on the results of four tasks: To estimate the number of people in Edmonds who are either homeless or are at risk of becoming homeless; to inventory services in Edmonds for homeless individuals; to look at existing or potential funding streams that could support homeless services; and to interview other cities about “promising practices” they have implemented to address the issue.

A dozen local homeless residents were interviewed as part of that earlier study, the first step in an Edmonds City Council initiative aimed at addressing homelessness in Edmonds. The council in 2017 allocated $250,000 toward addressing the homelessness issue.

The latest report, Koné said, was aimed at updating the 2019 study to reflect possible impacts from the COVID-19 pandemic and related pandemic-relief funds. The study once again worked to identify the type and extent of homelessness in Edmonds, to inventory current homeless services offered in Edmonds and surrounding cities, and to identify both current and potential funding sources to address the issue. The consultant was also asked to again look at best practices from other municipalities.

As part of the update, Koné conducted an online survey of local stakeholders that provide homelessness services, receiving 43 responses.

The data “begins to paint a pretty bleak picture for people who are living at or below the poverty line who are trying to afford housing in Edmonds,” Koné added.

Regarding the extent of homelessness in Edmonds, the consultants once again used population-level information from the Washington State Department of Social and Health Services (DSHS), aggregated by the 98020 and 98026 ZIP codes to get city-specific information.

The total number of DSHS clients for Edmonds was 3,581 but those numbers exclude Medicaid recipients. When factoring in an estimate of Medicaid beneficiaries, the number of Edmonds residents defined as “at risk” for homelessness is 8,802, Koné said.

“What we have seen is that although the…numbers of people in Edmonds who have been receiving DSHS services has been declining since about 2012, the percentage of people in Edmonds who are receiving DSHS services in Edmonds, who are homeless, is steadily increasing,” she said. She also pointed to the change in the homeless count — as shown in the above chart — in 2020 and 2021, which is when the City of Edmonds began awarding pandemic assistance grants. “There aren’t enough data points to be able to say with certainty there is a correlation between the assistance payments that were going out the door and the lack of a steep increase (in homelessness),” Koné said. But the city may be seeing “the beginning of some (homelessness) prevention efforts (due to the grant assistance),” she added. 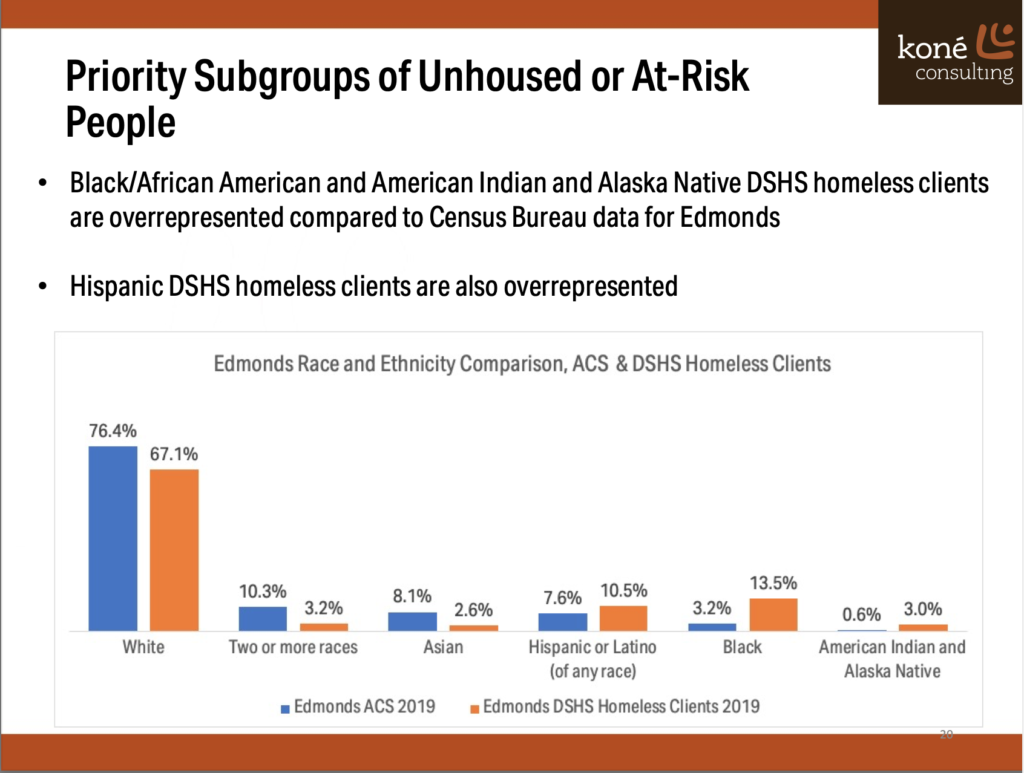 Based on the Census data and DSHS statistics, people of color who are unhoused or at risk of homelessness are overrepresented. Older adults are also at greater risk, she added.

Koné also talked about the common reasons why people become homeless in Edmonds in the first place, citing the results of the online survey with homelessness service providers. Lack of affordable housing is the top reason (69%), with mental illness coming in second at 37% and a rise in housing costs third at 36%. As for why people stay homeless in the city, lack of affordable housing was cited by 63% of respondents, lack of adequate support services (61%) and mental illness (32%). 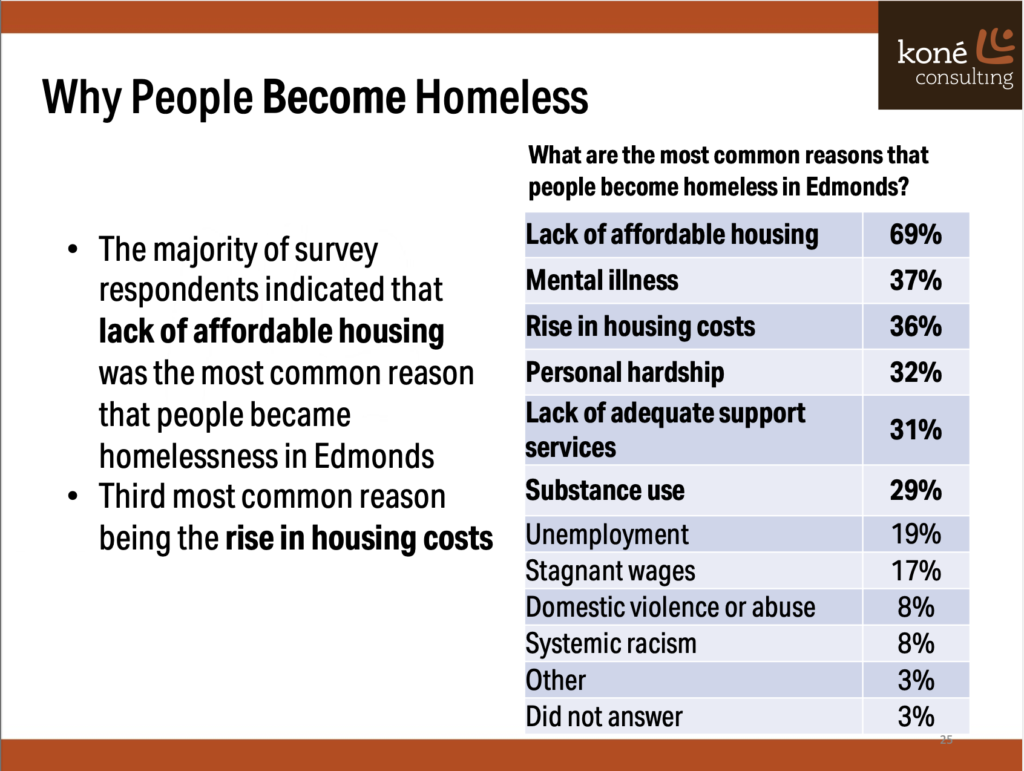 Similar to the 2019 report, Koné said that “hidden homelessness” was the most prevalent form in Edmonds, according to the survey of service providers. Survey respondents indicated that the majority of homeless people were living in their cars or RVs (69%) or with friends or family (59%). It is not as common for homeless people in Edmonds to be in “visible places like parks or on the street,” she said.

Using data from 211, which takes calls for information and referrals to social services and related help, rent assistance is a top unmet need in Edmonds, she added. Lack of transportation is cited as a barrier to receiving services, and this is likely because there are no homeless shelters in South Snohomish County, with the closest location in Everett. “Transporting individuals in need to Everett for those services is a challenge,” she said.

Later in the presentation, Koné talked about money available for homeless services, noting that survey participants indicated that funds and grants from the City of Edmonds have been a leading source of funding. One future funding source mentioned by providers is Snohomish County’s 0.1% sales tax, approved by the county council in December, to fund affordable housing and behaviorial health services. A total of 82% of funds will be used to build affordable housing and emergency shelter services. “That’s something that, in collaboration with the county, the city might be able to tap into,” she said.

Finally, Koné shared some best practices, including a shared housing program known as HIP in San Mateo County, California that matches individuals and couples seeking housing with people who have a room to rent. In addition, she pointed to a best practice for interagency collaboration in nearby Bellevue, called a CARES model. It includes a response unit with two supervised student social workers on call to respond to assist vulnerable populations. Residents are encouraged to call CARES instead of 9-1-1.

The consultant concluded with the following recommendations:

– Pursue a collaboration with Edmonds College to provide an outreach social worker for the Edmonds human services department, working with Edmonds first responders to provide services to unhoused and others in crisis.

– Approved by a vote of 5-1 (Councilmember Susan Paine opposed), an ordinance amending the 2022 city budget. Councilmember Laura Johnson left the meeting early and wasn’t present for this vote.

– Unanimously approved an ordinance that reestablishes the citizens salary commission, which was disbanded last year, “as a broad concept,” with details to be worked out later. Comprised of citizen volunteers, the salary commission sets salaries for the mayor and city councilmembers.

– Approved by a vote of 5-1 (Councilmember Kristiana Johnson opposed), a change order related to extra work associated with removing water from the Civic Park site, at an additional cost of $298,080. Construction began on the nearly 8-acre Civic Field site last August, and the new park is expected to be complete by the end of this year. The council vote followed a construction update by Parks, Recreation and Cultural Services Director Angie Feser, who explained that the site requires water removal, extensive grading and the addition of fill material. The city is also required to treat related stormwater discharge, but because a treatment facility wouldn’t fit into the existing Civic Park site, the city is instead treating it upstream at Yost Park — in the same Shell Creek watershed as Civic Park.

– Received an updated tree canopy assessment, presented by SavATree Consulting Group. The report showed that from 2015-2020, the city’s tree canopy actually increased slightly — from 34.3% to 34.6%. However, the consultants stressed that tree canopy and canopy change are not evenly distributed: Some areas of city have 7% tree canopy while others have 97%. Of Edmonds’ total tree canopy, 58% is located on residential land. The consultants also noted that current and past practices impact the distribution of tree canopy — include zoning decisions, the ability of residents to request and advocate for new street trees in their neighborhood, and racist practices of the past. “In order to ensure a just and equitable future in which all of Edmonds’ residents are afforded the advantages that the trees provide, the city should strategically target its planting efforts,” the report concluded.

– Heard the annual report from the city’s hearing examiner.